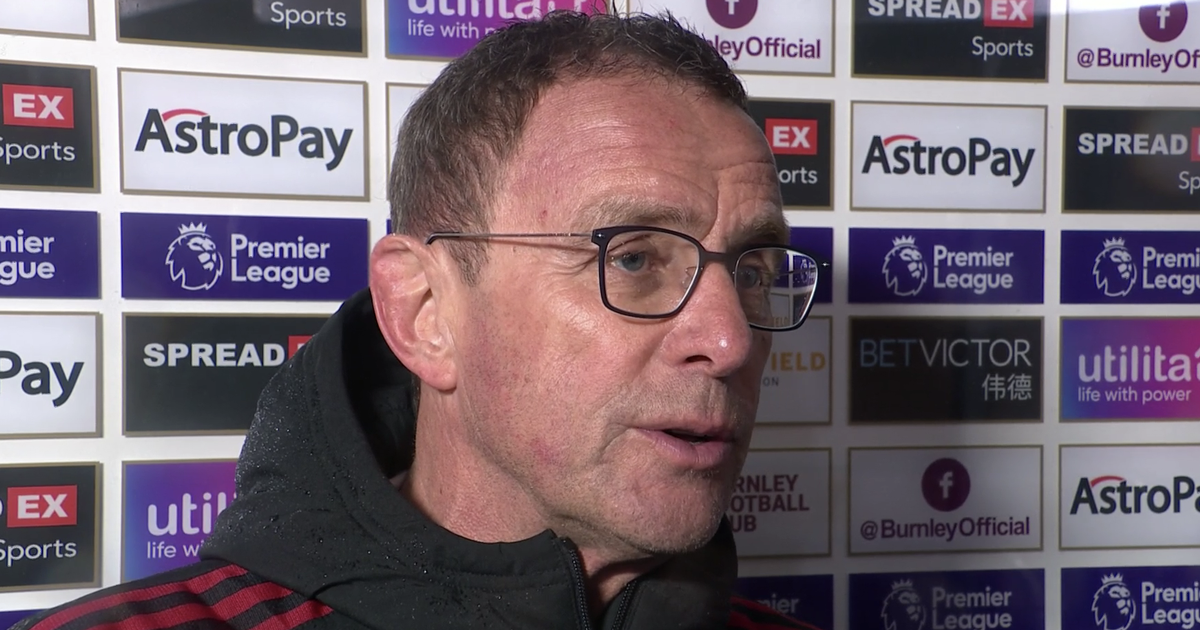 The Red Devils had two goals disallowed in the opening 21 minutes at Turf Moor.

Raphael Varane’s header was ruled out after VAR official Stuart Attwell advised Dean to check the pitch-side monitor for a potential foul by Harry Maguire on Jay Rodriguez.

Moments later, an own goal was chalked off after Paul Pogba was judged to have fouled Erik Pieters by the nearby linesman.

Speaking to reporters after the game, Rangnick was not happy with the officials. “We scored three goals,” raged the German coach.

What’s your opinion of Manchester United’s performance against Burnley? Let us know in the comments below!

Ralf Rangnick was frustrated with Manchester United’s result against Burnley
(

“The second one that was disallowed, the linesman flagged foul but 10 seconds after that incident. This was a very soft decision I must say.

“Again we played an excellent first half. We controlled and dominated the game. We scored the three goals but two were disallowed.

“In the second half we were not aggressive enough. It was clear they would come out and be aggressive. The way we allowed them to score, we didn’t defend the whole situation.

“A frustrating night for us because we should’ve won that game comfortably.

Although United had two decisions go against them, they were perhaps fortunate not to see Maguire sent off for fouling Rodriguez in the second half.

The former England striker appeared to be through on goal when he was brought down by the United captain, although Dean produced just a booking.

The Red Devils took the lead at Turf Moor when Paul Pogba found the back of Nick Pope’s net after 18 minutes, with Rodriguez equalising in the second half.

“I think you saw the first half, we had control,” said Maguire at full-time.

“We have got to win the game with the amount of chances we created. We had to get that second goal. Two points dropped.

“We wanted to dominate the game but for sure when you come to Burnley away you are not going to dominate for 90 minutes. We had to see it out better.

“We conceded like against Middlesbrough [in their FA Cup defeat last Friday] when they had that spell of pressure. We have got to be that bit more clinical.

“It was a disappointing goal on our behalf to concede. We came out in the second half a bit sloppy. We had long enough in the game to come back from that and try and find the winner.

“We demand on ourselves to win the football match so it is disappointing.”

On Varane’s disallowed goal, Maguire added: “I think he gave it offside. He said it wasn’t a foul. Interfering with pay, I don’t know.

“I don’t think Rodriguez would have been affecting the goal. I think the other one for Paul Pogba’s judged to have fouled. It was definitely not a foul.”