Meet the footballer sharing game's inside secrets - and inspiring next generation 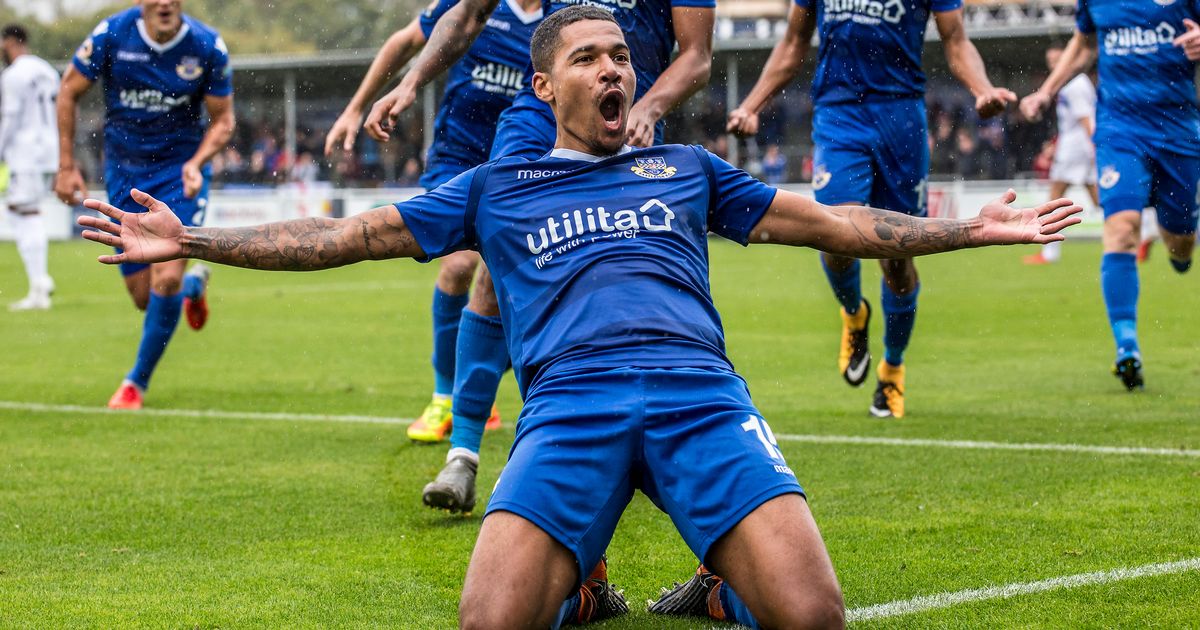 Cars, lifestyles and on-pitch performances are often the only aspects of footballers’ lives the public are exposed to.

Like a snow globe, an extremely expensive one at that, the life of a football player is revered from the outside looking in.

However supporters do not see the often-painful experiences; varying from injuries and defeats to those dreaded conversations with managers and board members, that often end with players strolling out the exit door for good.

But Eastleigh defender – and the second youngest Crystal Palace player of all time – Alex Wynter is hoping to offer insights often hidden from the public eye.

Wynter currently finds himself in the all-too familiar position of recovering from a significant injury.

HAVE YOUR SAY! Do you think young footballers need to have more support and education? Comment below

But in and among his physio therapy and long gruelling sessions in the gym, the defender has also found time for his blog – Fly On The Ball, a first-person memoir where he details his experiences and the many football processes all players will go through during those careers.

He has forensically detailed his current recovery program at Eastleigh, while also offering fascinating insights on the process of negotiating and signing new contracts at side and the biggest misconceptions in football.

Speaking exclusively to Mirror Sport, Wynter said: “I wish I had someone who had an insight into the journey I was on.

“Instead of facing those ups and downs when I came across them, I wish I had an understanding of how to deal with those moments before they happened.

“Maybe I would have handled those better, and also prepared myself, mentally or physically, for those moments.

“I wish I had somebody to lean on and to sponge off so I could really soak that knowledge and experience up to give myself a chance to go as far as possible.”

Wynter became the second youngest Crystal Palace player of all time when he replaced Darren Ambrose in the third round of the FA Cup in 2010.

With the Eagles holding onto a 2-1 away lead against Sheffield Wednesday, then manager Neil Warnock looked to the young defender to help secure the victory.

Wynter was a part of Crystal Palace from the age of nine-years old
(
Advertisement. Scroll to continue reading.

“I thought I was there to make up the numbers, the club were going through administration at the time and there was a few of us on the bench,” he added.

“I came on for Darren Ambrose, and running on the pitch was weird, as I had been on a pitch hundreds of times, but this was different.

“The atmosphere, it was surreal, almost like watching yourself in a film. Even if it was only for a minute, it was still an incredible feeling, like a reward for all of the years of hard work, and the sacrifices my mum, my dad, and the rest of my family made.”

A glimmer and a subtle smile crept onto Wynter’s face when asked about his debut – and that shouldn’t surprise anybody.

Wynter is currently in the process of trying to recover from another long-term injury
(
Advertisement. Scroll to continue reading.

After-all, from the age of nine, he grafted for that elusive right to pull on the Eagles jersey for the first team.

But, on reflection, Wynter admits he perhaps didn’t savour his achievement as much as he should have done.

He added: “As great as it was, I was always focusing on what’s next, so even though I was getting texts of congratulations and I was told that I was the second youngest debutant, I don’t think I enjoyed it as much as I could have.

“Maybe it was because I was humble and grounded in myself, I did not really let it get to my head, and I kind of wish that I soaked it up and embraced the love and support.

Wynter was a highly coveted product of the Eagles’ academy
(
Advertisement. Scroll to continue reading.

“I just said ‘thanks’ and brushed it off, I hate attention, and I did not want that attention on me.”

Wynter spent the next few seasons with Palace’s U23s, while he was also sent out on loan to Colchester United and Portsmouth, before returning to the Essex giants at the end of his contract with Palace in 2015.

He joined Eastleigh permanently four years ago and played an instrumental role in the thrilling 2018-19 campaign where they reached the semi-finals of the play-offs.

Despite his current injury preventing him from appearing this season, his lack of action on the pitch does not mean he has not been able to inspire the next generation of players.

“I had a mum reach out to me. Her son plays football and she was telling me that he was not enjoying it, and she wanted my advice on various things,” he added.

“She asked about moving clubs, when it’s time to move on, or how to approach a club, just things like that.

“I had a few people like that reach out, which is nice as it shows that my thing is getting out there, she is always thanking me for the advice.

“The blog was born out of an injury, as way for me to get things off my chest, and to give people that insight. I always said if it helps one person, then that is brilliant for myself.”

Wynter made his debut for Crystal Palace back in 2010

Wynter made his debut for Crystal Palace back in 2010
(

It could perhaps be argued ‘Fly On the Ball’ aligns perfectly with what the footballing world have seen in recent weeks. There is a wonderful authenticity and honesty to Wynter’s writing, as well as a firm educational insight into his career and the likely experiences young players could and should expect.

Manchester United duo Jesse Lingard and Phil Jones have both opened up about their struggles with mental health over the years, while former United captain and current Derby manager Wayne Rooney has also bared all about his struggles.

“I think it’s really important that players are now speaking out on the matter. From the outside looking in, I think people forget we are human beings,” said Wynter.

“At the top, the pressure must be incredible, I can’t imagine whats it’s like on the international stage and the Premier League.

“When young boys and girls are feeling those same pressures and the way their idols are feeling, they know they are not alone and can go and speak to people.

“There is a stigma that nobody wants to talk or open up, but if more people do, it will only benefit the next generation, and the mental health of other people.”

At no point does Wynter claim to have all the answers. But what he does have is an innate desire to help fill the knowledge and experiential gaps for young players just like him.