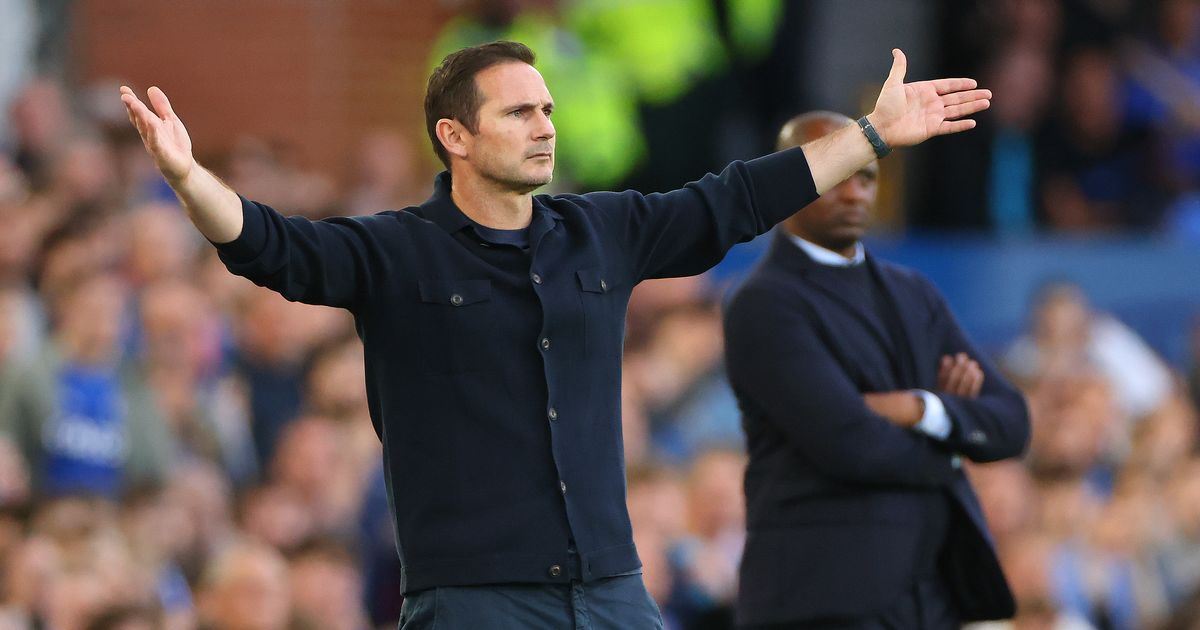 Frank Lampard has kept Everton in the Premier League

Through the blue smoke, the pitch invaders and the orange jackets of the stewards, you could just make out Frank Lampard.

He celebrated Dominic Calvert-Lewin’s winning header by reaching for a water bottle and taking a long, hard swig.

At the final whistle, it looked like he had been through more stress in 101 minutes of technical area prowling than he had in his entire playing career.

Now, thanks to a remarkable comeback from his team, Lampard can go and relax and enjoy himself at the Emirates on Sunday.

His work has been done…and is just starting.

But that will be for the summer. In the meantime, he can congratulate himself and his players on a magnificently spirited response to what was a dire situation.

After the flares, the fireworks, the full-volume renditions of some Goodison Park classics, it was time for cool heads and composure.

But in the first half, Everton had neither.

Within a few seconds, Anthony Gordon was following crowd instructions to announce himself to Wilfried Zaha, who was less than amused.

There is an argument to suggest Everton would not have been in this predicament had their intensity levels been hovering around this mark for most of the season but that is another story.

HAVE YOUR SAY! Does Lampard deserve huge credit for keeping Everton in the top flight? Comment below

But to thrive in the Premier League, intensity alone is not enough.

This is an expensive Everton squad in need of yet more transfer surgery now they are staying up.

And apart from recruits, a mostly-fit Yerry Mina would also come in handy.

Had the Colombian been at the heart of the home defence, it is unlikely Jean-Philippe Mateta would have been allowed to head in Eberechi Eze’s free-kick unchallenged.

But it was only what Palace deserved. For long periods of this contest, they were, by some distance, the more accomplished side.

Had Zaha not been on the selfish side on a couple of occasions, Palace could have given themselves a chance to enjoy a more comfortable lead before it was doubled by Jordan Ayew.

To say the crowd felt aggrieved would be the understatement of the season as Ayew had been slightly fortunate to be given just a yellow card for a scissor-style challenge on Anthony Gordon.

Jordan Pickford felt so aggrieved, he sprinted half the length of the pitch to scream at Taylor.

Should have saved his energy and kept his mind on the job in hand because he was one of several guilty parties in the calamity that was Palace’s second.

It was a goal that underlined the shambles that Everton have been for most of this season.

Dominic Calvert-Lewin sparked pandemonium inside Goodsion Park with his goal

In fact, it was – until the stunning finale – season in a nutshell.

There had to be a response from Lampard’s side in the second half and, courtesy of the smartest of finishes from Michael Keane after a Mason Holgate knock-down, there most certainly was.

In desperation, Lampard had sent on Dele Alli but the twelfth man really was, as the cliche goes, the crowd.

Palace, all slickness and style, became a touch rattled.

And when Dele drilled over a cross, the Palace defence fell apart and Richarlison’s mishit deceived Jack Butland.

At least you thought it was pandemonium until you heard and saw the response to Calvert-Lewin’s header.

But when the noise dies down and the blue smoke clears, one thing will be clear.