Gareth Bale stormed off from a pitchside interview after he was questioned about his Wales future following their 4-0 defeat to Denmark on Saturday. Wales suffered their biggest defeat in the tournament and were knocked out at the Euro 2020 last-16 stage in Amsterdam.

Bale has refused to comment on his club or international future during the competition, and when a BBC reporter asked if he had just played his final game for Wales, he walked away from the interview.

The 31-year-old has made 96 international appearances and was the standout performer when Wales made the semifinals at Euro 2016.

After the game, Wales coach Rob Page defended Bale’s actions and told a news conference: “He’s disappointed — why would he want to answer a question about his future? He’s hurting.

“It’s an insensitive question — he’s done the right thing by walking away and gathering his thoughts. It’s about the group and what we do moving forward.”

Wales players were unhappy about Denmark’s second goal because they felt striker Kieffer Moore was fouled in the buildup.

Before walking away, Bale was asked about the incident and replied: “If you play the ball through the back of someone, it’s a foul.

“I felt the ref was influenced by the supporters here. It’s disappointing — that’s all I can say.”

The Wales captain also added that he was disappointed with the result but pleased with the effort from the squad.

“It’s not how we wanted the game to go. From our point of view, we started very well and then the game changed,” Bale said. “We tried to play in the second half but made a mistake to concede, which killed the momentum on our side.

“To finish how we did is disappointing, but the boys are frustrated and angry, understandably. I’d prefer us to go out that way. We’ve missed an opportunity, but I can’t fault the effort and that’s the minimum requirement. I’m proud of them still.” 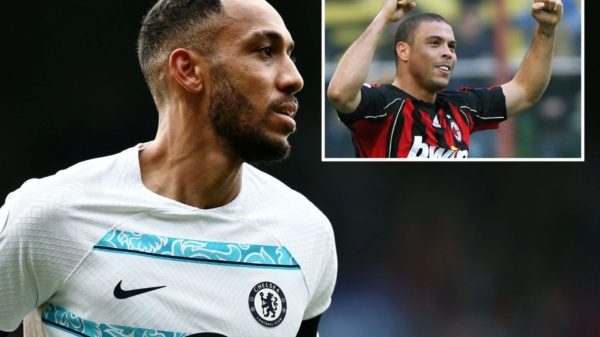 PIERRE-EMERICK AUBAMEYANG will use tricks and tips picked up from the original Ronaldo as he attempts to revive Chelsea’s Champions League campaign against old...