The Portugal captain thought he’d won the World Cup qualifier, poised at 2-2, when he nicked in front of goalkeeper Marko Dmitrovic and struck home, with defender Stefan Mitrovic stretching to clear off the line.

However, despite replays showing the ball clearly crossed the line, with VAR not in play the officials failed to award the goal, leaving Ronaldo and his manager absolutely furious at the full-time whistle. 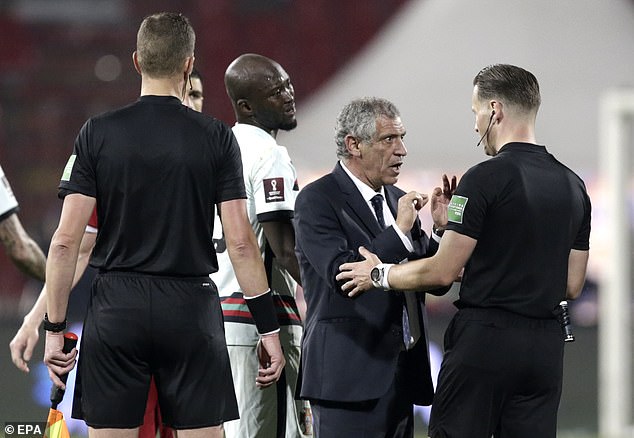 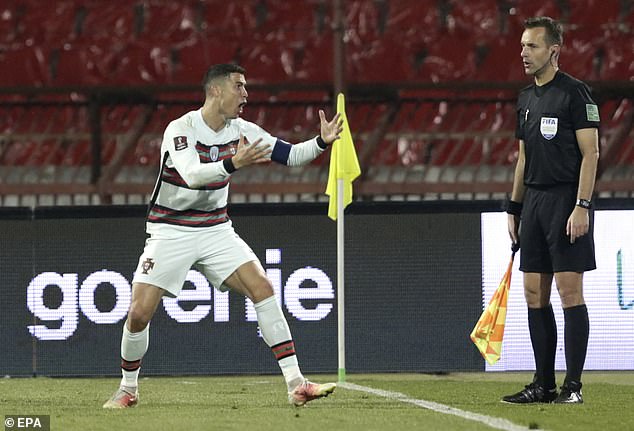 Ronaldo hit an effort towards goal and it looked in, but the officials said it had not gone over

‘We scored a goal that was not given when the ball went in,’ Santos told Portuguese broadcaster RTP.

‘In a match of this level, that isn’t possible.’

The coach added afterwards that the referee, Dutchman Danny Makelie, admitted he was embarrassed by the decision.

‘He had told me on the pitch that he was going to see the images and that if it was the case he was calling me to apologise – and so it was.

‘It is the second time in a qualifying phase that they apologise to me after the game. I told him on the pitch that there was no VAR or goal line – one of the things he told me was that the goal line was important – but I told him that the ball was half a metre inside the goal.

‘There was no obstacle between the goalkeeper and the goal line. problem because we drew. We have to rethink. The referees are human and make mistakes, but that’s why there is the VAR and the goal line technology to avoid this.’

With no VAR, Ronaldo was furious at the full-time whistle as Portugal had to settle for a point

Afterwards, Ronaldo wrote on Instagram: ‘Being captain of the Portugal national team is one of the greatest honours and privileges of my life.

‘I give and will always give my all for my country, that will never change.

‘But there are difficult moments to cope with, especially when we feel like an entire nation is being harmed. Head up and face the next challenge! Come on Portugal!’