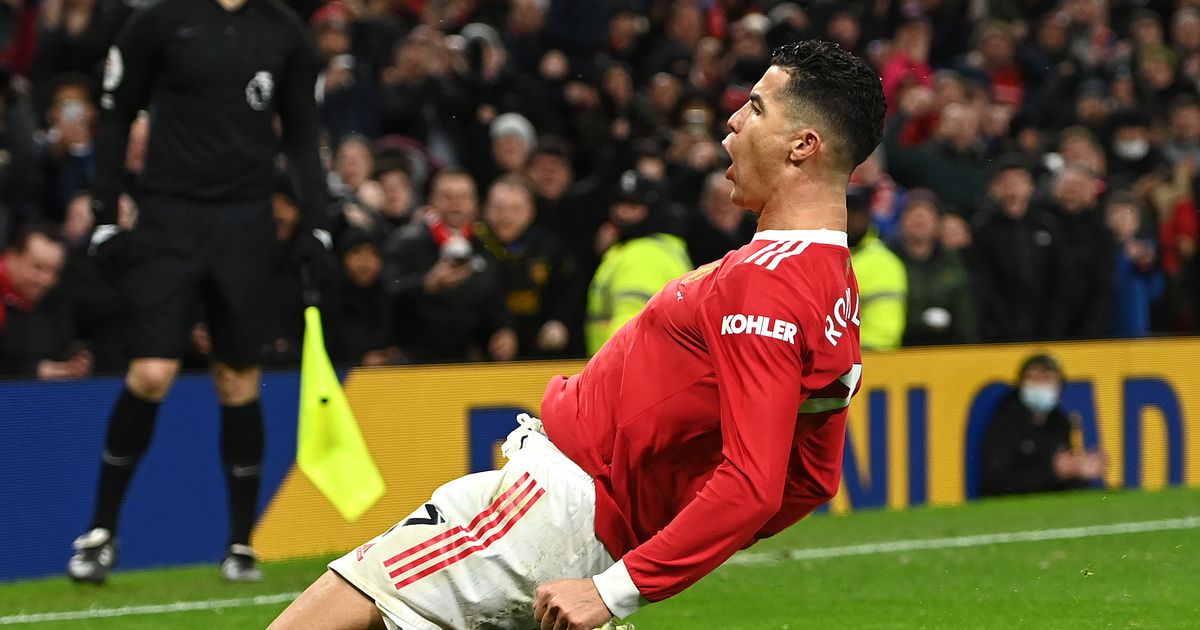 The Red Devils recorded their first Premier League victory since late January thanks to their No.7 ending his six-game goal drought.

Ralf Rangnick’s men were comfortably second-best in the first half, as the Brighton put their stamp on the game from the off.

But when Ronaldo struck with an emphatic, throwback finish in the 52nd minute, the Seagulls were shot down.

They lost captain Lewis Dunk to a red card two minutes later, ending their hopes of becoming the latest team to pick up points against an out-of-form United, whose night was capped by Bruno Fernandes’ late sealer.

Join the debate! Where will Man Utd finish this season? Comment your prediction below.

It was a tricky start to the night for Rangnick, as Raphael Varane pulled out of the starting ill after falling ill prior to the warm-up.

The defender was replaced by Victor Lindelof, whose place on the bench will now be taken by third-choice goalkeeper Tom Heaton.

Varane’s recent performances were something of a silver lining for the Red Devils, with his composed presence in the back line proving beneficial on numerous occasions.

And that was not the only noteworthy piece of team news, as Paul Pogba and Marcus Rashford were dropped to the bench, with the pair being taken out for Fred and Anthony Elanga respectively.

If you’d have only seen the pitch for the first 45 minutes, you’d be forgiven for thinking Brighton were the home team.

Graham Potter’s team controlled proceedings with their usual swagger, unfazed by playing at the home of the 20-time English champions.

And barring Jadon Sancho’s early effort after good work from Ronaldo, the Seagulls had every big chance of the first half.

And two of those belonged to Jakub Moder, who had his new Poland manager, Czeslaw Michniewicz, watching on.

The midfielder was twice denied by David de Gea and his second effort – a free header from inside the penalty area – forcing the Spaniard into a typically spectacular save to his right in front of a disgruntled Stretford End.

De Gea saved spectacularly from Moder in the first half

Not only were those in the Stretford End not happy with what they’d seen, but the rest of the home fans, too.

When referee Peter Bankes blew his whistle for the break, a cacophony of boos erupted from the Old Trafford stands.

Rangnick went into interval knowing he had work to do, having already abandoned his 4-3-3 formation after Scott McTominay’s early struggles in central midfield.

Rarely do United’s supporters voice a negative verdict midway through a match but no wonder they did so this time, as their team failed to make a single tackle in the first half.

On the other hand, Potter – rated 40/1 to be the German’s successor come the end of the season – walked down the tunnel knowing his side were in control.

For all of Brighton’s good work, it only took seven second-half minutes for Ronaldo to turn the match on its head by scoring his goal of 2022, ending a six-game goal drought.

Seconds after eternal rival Lionel Messi missed a penalty in Paris against Real Madrid in the Champions League, the Portuguese picked up the ball on the edge of the Seagulls penalty area and evaded a raft of defenders to blast past Robert Sanchez from range.

The Seagulls goalkeeper could only stand and watch Ronaldo’s throwback strike, reminiscent of the days the superstar would take games by the scruff of the neck, hit the back of the net.

In doing so, Ronaldo became the third Red Devil to score a Premier League goal at the age of 37, joining club legends Ryan Giggs and Paul Scholes.

If United’s opening goal was a wave of change in the game, then Dunk’s sending off was the turning of the tide.

Dallying on the ball just outside of his box, the Brighton centre-back was pressured by the onrushing Anthony Elanga and brought the youngster down.

After Bankes consulted with VAR, Dunk was deemed to have denied a clear goalscoring opportunity and swiftly received his marching orders.

However, there was a price to pay for the hosts as Fernandes picked up a yellow card for his initial appeals.

Dunk’s protests fell on deaf ears and within minutes, Potter and co went from being in charge to being dominated.

Dunk’s yellow card turned to red after a VAR review

After a first half which threatened to send much of Old Trafford to sleep, the Red Devils made up for lost time by peppering Sanchez’s goal.

At first, United continued their pattern of failing to put away their chances, as Ronaldo and Fernandes both missed sitters in the closing stages, failing to give their team a two-goal cushion.

And they were almost punished when Moder, who must’ve finally thought he’d beaten De Gea, rattled the crossbar with a long-range strike.

But Rangnick’s under-fire men held out, collecting their first three points in the Premier League since January 22 after Fernandes finished things off in the 97th minute thanks to substitute Paul Pogba’s smart work from a free-kick.