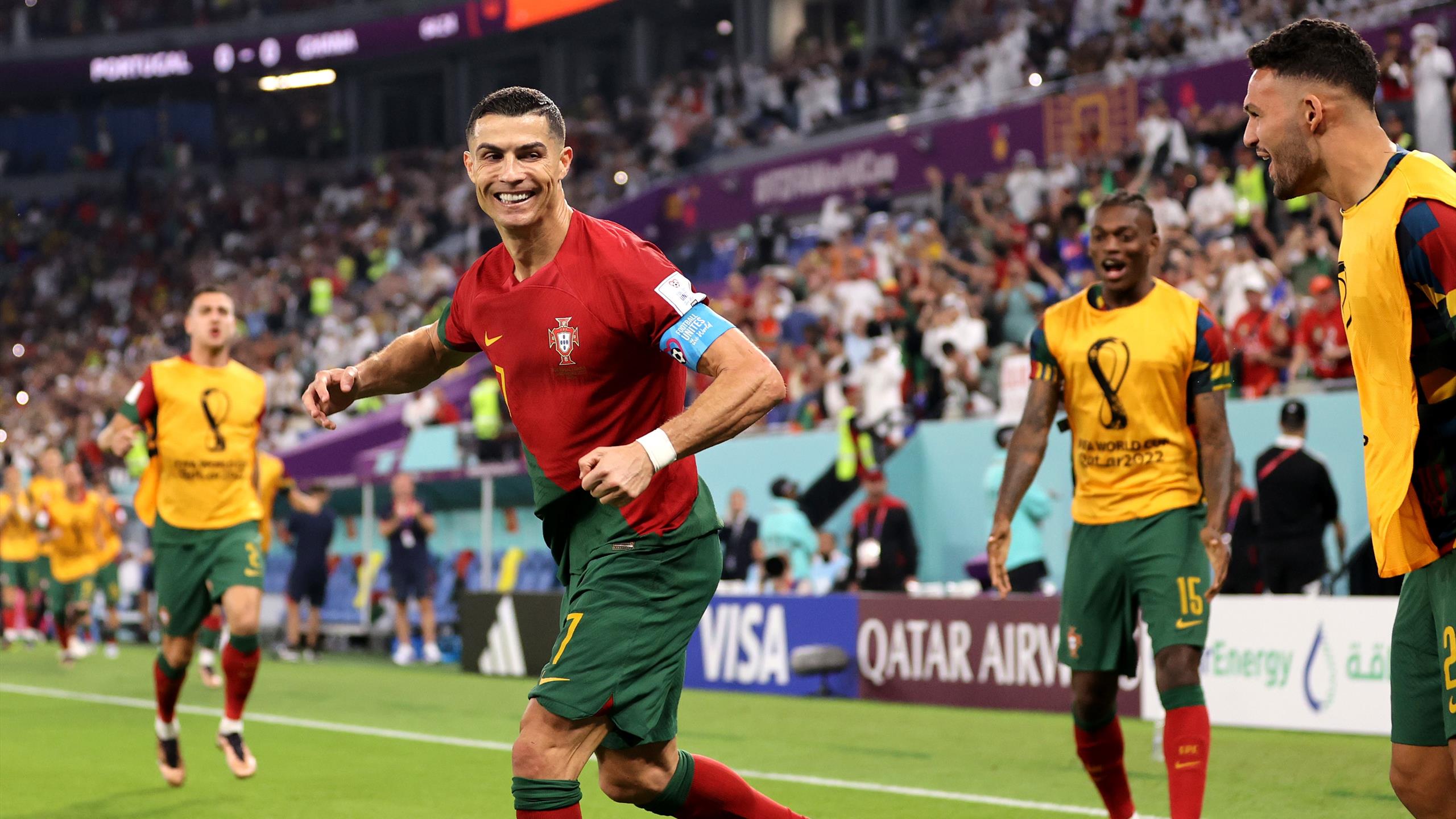 Cristiano Ronaldo made yet more history by becoming the first man to score in five World Cups after finding the net against Ghana.

The strike was Ronaldo’s eighth goal of the finals, and he dispatched his first goal of this year’s finals from the penalty spot after going down under Mohammed Salisu’s challenge.

It moves him level with Diego Maradona, Rivaldo and Rudi Voller on the all-time top goalscorers’ list, but still shy of Miroslav Klose’s tally so far unsurpassable tally of 16.

Ronaldo is currently a free agent after he came to a mutual agreement to cancel his Manchester United contract following an explosive interview with Piers Morgan.
The Portugal captain took no prisoners in a revelatory chat with the TalkTV presenter, with Erik ten Hag, the Glazers and Wayne Rooney all heavily criticised. However, the 37-year-old is now making headlines for what he does best, producing on a football pitch.

His first goal on football’s greatest stage came on June 17 2006, scoring in a 2-0 group stage win over Iran, which proved to be his sole strike in a tournament that saw Portugal bow out to France in the semi-finals.

Four years later, then of Real Madrid, he found the net and registered an assist in Portugal’s 7-0 thumping of North Korea. It would prove to be an otherwise disappointing finals for Ronaldo and co in South Africa, after failing to score in any of their other three games at the tournament.

They were beaten 1-0 by neighbours and eventual champions Spain, who secured their first World Cup triumph.

His third finals appearance in Brazil was even more disappointing, as a group stage exit beckoned. Following a 4-0 humbling by eventual winners Germany, Ronaldo claimed an assist for Silvestre Varela to spare Portugal’s blushes and give them a last-minute equaliser in a 2-2 draw with the USA.

That heavy opening defeat to Germany proved costly, and despite Ronaldo scoring in a 2-1 win over Ghana, Paulo Bento’s side finished third and were eliminated from the competition on goal difference.

Ronaldo’s love affair with the World Cup had yet to take off heading into the 2018 finals in Russia, and it was another underwhelming last-16 exit on this occasion under the guidance of Fernando Santos.

Arguably his most impressive appearance at the finals to date came in a 3-3 draw with Spain, as the skipper scored a hat-trick and followed that up with the only goal of the game in a 1-0 win over Morocco.

Second spot was secured after a 1-1 draw with Iran, but Portugal fell victim to Uruguay in the second round and leaves Ronaldo still chasing a first World Cup victory over his stellar career.

Time will tell if he breaks his duck in Qatar, in what will surely be his last dance in the Middle East.