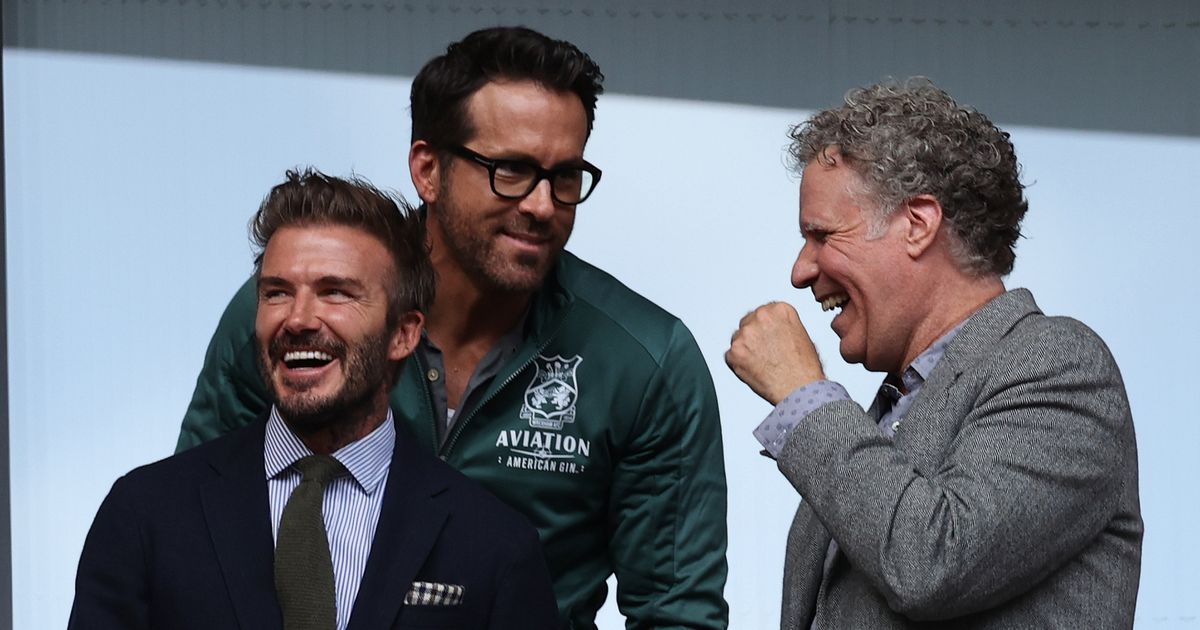 Wrexham owners Ryan Reynolds and Rob McElhenney have attracted plenty of attention since taking over at the north Wales club, and were joined by some big names for the FA Trophy final

Beckham and Ferrell joined Wrexham’s owners for the game (

Image: The FA via Getty Images)

Former Manchester United and England star David Beckham and Hollywood actor Will Ferrell were among the big names present at Wembley for Wrexham’s FA Trophy final against Bromley.

The pair were spotted in conversation with Wrexham’s owners, actos Ryan Reynolds and Rob McElhenney. ‘Deadpool’ star Reynolds and co-owner McElhenney attended their first home game back in the autumn after completing their purchase of the club last season.

A second-place finish in the National League has seen the Dragons reach the play-offs, while they reached the trophy final after overcoming league champions Stockport in the semis. Despite a full Premier League programme, including a fixture for Beckham’s former side United away at Crystal Palace, the ex-international was part of a star-studded group.

McElhenney, one of the stars of It’s Always Sunny in Philadelphia, had tweeted a show of support on the morning of the game. “Que sera, sera…. whatever will be will be, we’ll see you at Wembley, que sera, sera,” the 45-year-old wrote.

Ferrell, a close friend of McElhenney’s co-owner Reynolds, had revealed in January that he planned to visit Wrexham’s home ground. “We are planning a trip in February to hit the triple crown — Fulham, QPR and and Wrexham,” he told the Men in Blazers show, as reported at the time by Wales Online.

February was also the month when McElhenney and Reynolds laid on a boozy treat for fans to mark the first anniversary of their takeover. The new owners arrived when games were still being played behind closed doors, but were able to celebrate with supporters one year on.

Beckham, meanwhile had paid a visit to former club Paris Saint-Germain earlier in the week before making the trip across the channel. The ex-midfielder shared photos with the likes of Kylian Mbappe and Neymar on his Instagram account after spending time in the French capital.

Reynolds and wife Blake Lively were seen cheering from the stands
(

Back in March, McElhenney shed some more light on the story behind the takeover. There have been plenty of changes since he and Reynolds arrived in town, including the arrival of manager Phil Parkinson over the summer, and they could still be rewarded with promotion.

“The whole endeavour has been incredible,” the actor told the Fearless in Devotion podcast. “As the relationship with the club has got closer, myself and Ryan have got closer too.

“The truth is if I don’t see him I probably message him about three times a week. We catch up all the time and I’ll be talking to him tomorrow – it’s a great to have a friend like that who shares this with you.”