Pochettino: PSG are challengers, but Real Madrid have a habit of winning the Champions League 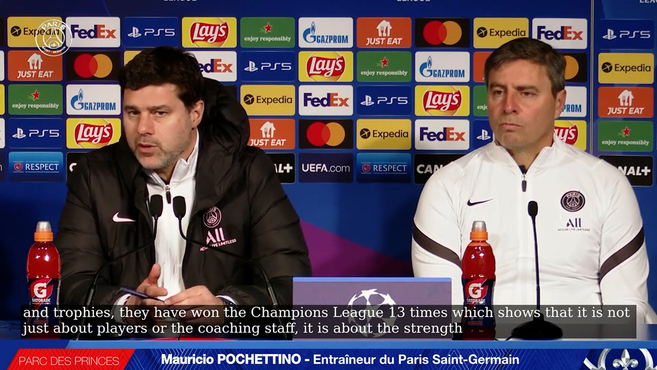 Mauricio Pochettino sees Paris Saint-Germain as the challengers ahead of their eagerly anticipated clash with Real Madrid in the Champions League.

The league leaders of France and Spain will come together in Paris for the first leg of their round of 16 tie on Tuesday, before the second leg on March 9, where a place in the quarter-finals is on the line.

“We have so much respect for Real Madrid as one of the best teams in the world,” Pochettino told the press.

“You don’t win 13 European Cups thanks to your coaches, that is down to the overall strength of the club.

“We are the challengers, a lot of effort has gone into building a squad to achieve our dream but we’re still the challengers and Real Madrid are the ones who have a habit of winning the Champions League.

“But we don’t feel like victims, I believe in my team, in my club and in our fans, who will give us a lot of energy.”

As ever, Lionel Messi will come under the spotlight to see if he can deliver on the biggest stage.

Although the Argentine has struggled in Ligue 1, he found the back of the net five times from five Champions League group stage matches, including a wonderfully struck strike during PSG‘s 2-0 win over Manchester City.

“In matches like this his experience is very important and he can play a fundamental role in transmitting that to his teammates,” added Pochettino.

“We don’t need to gear ourselves up for this game because everyone is already highly motivated and hugely excited about playing tomorrow and helping the team in any way possible.”

Pochettino revealed Idrissa Gueye and Abdou Diallo will not start the match, as they continue to fully recover from their triumph at the Africa Cup of Nations for Senegal.

“I don’t know what they will do at other clubs, but we know how to manage our players,” said Pochettino.

“We have to make these decisions with the team in mind.”