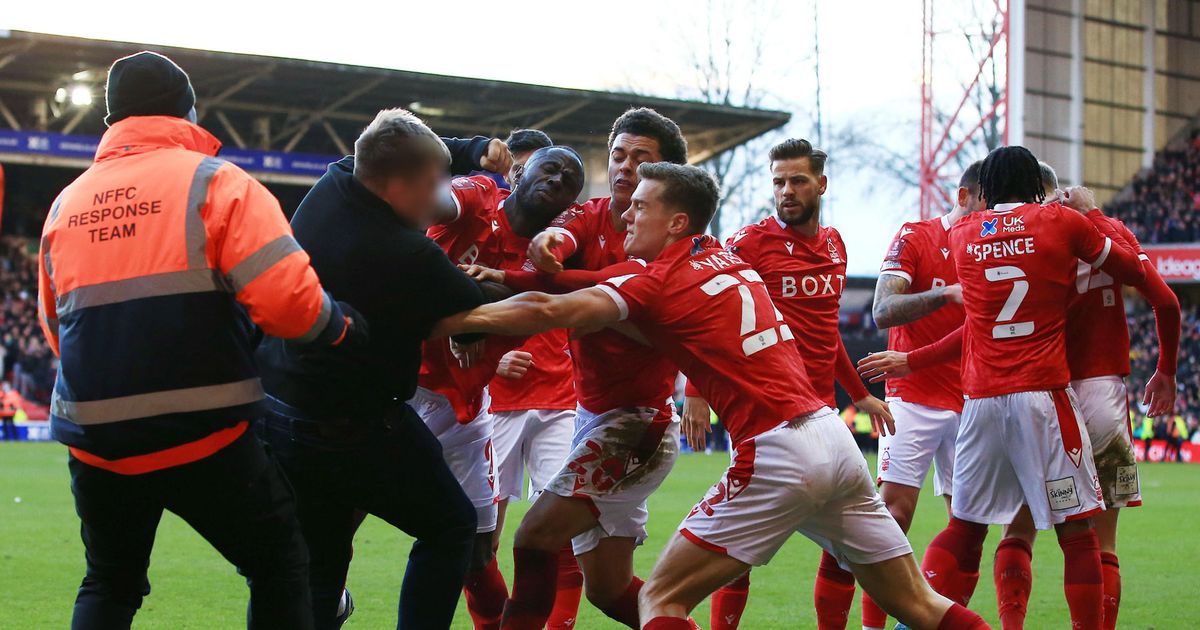 The incident happened on Sunday afternoon at the City Ground, where Championship side Nottingham Forest hosted local rivals Leicester in the FA Cup fourth round

A Leicester supporter has been banned for life by his club and arrested after invading the pitch and appearing to attack a group of Nottingham Forest players during Sunday FA Cup tie between the teams at the City Ground.

The incident happened after Forest captain Joe Worrall scored to give the Championship side a shock 3-0 lead in the 32nd minute. The game was goalless 10 minutes before.

Worrall’s goal was scored in front of the away stand at the City Ground and the 25-year-old gestured towards the Leicester fans before sprinting off.

As the defender celebrated with his team-mates – in front of the Forest fans – a travelling supporter sprinted on to the pitch and appeared to throw several punches at the group of players.

The man in question was restrained by stewards just seconds after the incident happened before being hauled away by police officers.

Stewards were forced to intervene
(

Chief Inspector Neil Williams, of Nottinghamshire Police, said: “We have arrested a man in connection with an incident that took place today (Sunday 6 February) during the first half of the Nottingham Forest and Leicester City FA cup match.

“Investigations are in the very early stages and our enquiries into the circumstances surrounding the incident are ongoing.”

A Leicester City spokesman said: “The Club is appalled by such behaviour and offers its apologies to Nottingham Forest and its players whose safety was compromised.

“We applaud the swift action taken by City Ground stewards in apprehending the individual involved, who will be subject to a lifetime ban from all Leicester City fixtures at home and away.

“We will offer every support to the relevant authorities in pursuing further appropriate action.”

The fan was bundled to the floor in the melee
(
Advertisement. Scroll to continue reading.

“That just should not be happening, it is disgusting,” said former England defender Jonathan Woodgate on BBC Radio 5 Live, while Match of the Day presenter Gary Lineker branded the fan an “embarrassment and a disgrace.”

Speaking ahead of Sunday’s match, chief inspector Williams said: “Due to Leicester City’s recent success, today’s match represents the first time these rivals have met in nearly eight years, so I understand that both sets of supporters will want to win.

“While we want everyone who is attending the game to have a great time, it is important that people don’t allow their emotions to get the better of them and spoil the day for others.

“The entire Lower Bridgford stand will be allocated to the away fans for the fixture, so I’d ask any Leicester fan who doesn’t have a ticket but is thinking of travelling to the match anyway not to do so and to stay at home and watch the match on television instead.

“As ever, our officers will be on hand to support fans and both clubs to provide an enjoyable day for everyone in attendance, and we will of course take positive action to keep people safe, should any crime or disorder take place.”

Leicester and Forest share a fierce rivalry, with tensions boiling throughout the day.

In a separate incident, a group of supporters were filmed attacking a pub in Nottingham city centre before the cup tie, throwing chairs and tables at windows.

Forest stormed into a 3-0 lead in the first half after goals from Philip Zinckernagel, Brennan Johnson and Worrall.

Kelechi Iheanacho pulled a goal back for Leicester before the interval, but a second-half strike from Djed Spence confirmed a 4-1 victory for the Championship side.

Forest will host Huddersfield in the last 16 of the FA Cup, with the match set to take place during the week commencing February 28.

Leicester were the defending champions, having beaten Chelsea in last season’s final.