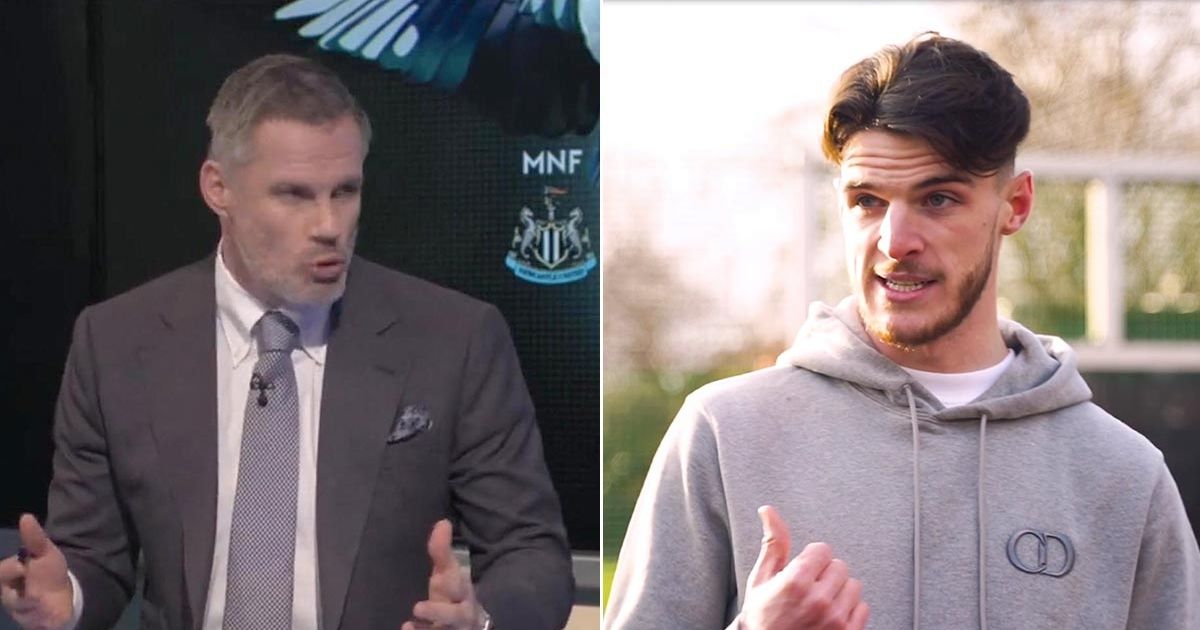 Declan Rice: All you need to know about Man Utd and Chelsea target

The West Ham and England midfielder, 23, was speaking to Carragher’s Sky Sports colleague Gary Neville on the latest edition of The Overlap podcast.

The banter came when Manchester United icon Neville told Rice: “I’ve not spoken to a footballer at your age that’s as switched on from a media perspective [as you are].

“Carragher’s in trouble, isn’t he? On Monday Night Football?”

To which Rice replied: “Carragher’s a goner! I’m coming for him!”

How highly do you rate Declan Rice? Let us know in the comments below!

After seeing the podcast, Carragher tweeted: “Well get yourself on MNF in March… let’s see what you’ve got!”

Rice then replied: “You sure you want that… you’ll be out of a job.”

Rice has become one of the best young players in the Premier League after breaking into West Ham’s first team during the 2017-18 campaign.

Since then, he’s made 175 senior appearances for the Hammers and broke into the England squad, picking up 27 caps to date. He also has three caps for the Republic of Ireland.

Rice – who’s rated at £100million – has been linked with a move to Man Utd in the summer, with other clubs thought to be interested in his services.

During his one-on-one interview with Neville, the midfielder went on to reveal his desire to win “all” major trophies available – something he’s unlikely to achieve at West Ham.

“I have always said it, I don’t want to have a career where I’ve not won anything,” said Rice.

“Growing up as a kid I’ve seen all these top players win the trophies, win the Premier League, the Champions League.

“I want to win the FA Cups, League Cups, even with England, I want to win it all. If you haven’t got that ambition as a footballer why are you playing?

“They are the best moments of your life winning those trophies. I have thought about it before, what would those days be like lifting that trophy? The day of it, the night out after.

“I definitely want to have those experiences of winning trophies and being the best I can be.”

On the speculation surrounding his future, Rice added: “You constantly read stuff about myself, [Jarrod] Bowen, [Manuel] Lanzini.

“If you’re performing well and there are top clubs around there are always going to be people circling. But I never actually read too much into it or believe it until something happens.

“For me it is just noise and I have got to stay focused on what I have got to do at West Ham, which is perform week in, week out and be the best player because that’s what I want to be.”