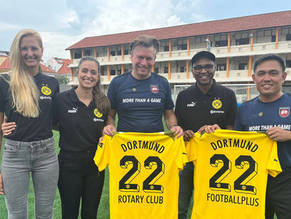 Borussia Dortmund has announced an exciting new CSR partnership between BVB Evonik Football Academy and FootballPlus (FP) to support underprivileged children in Singapore. Sharing the belief that soccer can change lives through character development of young athletes for higher self-confidence, teamwork, and mental fortitude, BVB and FP will join hand to create the special program, Champions Unlimited, which revolves around the three dimensions of a young footballer – body, mind and spirit.  Thanks to a special sponsorship from the Rotary Club of Singapore, the partnership is set to run until June 2024, with option to extend to June 2025.

Established in 2013, the Singapore-based FootballPlus works with 200 players every week throughout the year. The academy works with young people from disadvantaged and low-income families, giving out subsidies or full sponsorship to enable them to be involved in the weekly trainings.  At Champions Unlimited, young players will benefit from a customized program by BVB, and coaches will regularly receive ‘’Coach to Coach’’ workshops.

“When FootballPlus approached us with their idea, it directly felt as if we share the same goals. Dortmund is a region where people are used to the principle that hard work can pay off in the end, even for those who do not have those opportunities at first glance. We are happy to have a meaningful impact on the development of those kids”, states Suresh Letchmanan, Managing Director BVB Asia Pacific.

“Borussia Dortmund is more than a football club with an excellent reputation when it comes to bringing young football players to the top. We are happy and proud that we not only train kids on the pitch and open up the door to a footballing career. The idea and the focus is to create lifelong opportunities for those kids by giving insights into our club and the values which are important to become the best human being you might become. The kids we educate today are the adults of tomorrow. Hence we are extremely happy to support this project in Singapore right in front of our BVB office in Asia”, notes Christian Diercks, Head of BVB Evonik Football Academy.

FootballPlus envisions that football can help change lives. “Though a holistic value-based football program like Champions Unlimited, we believe that this experience allows our young football player to excel not only in sports but also in life. We are excited to partner with Borussia Dortmund with a shared determination to develop a framework in bringing the best quality footballing experience to our young football players. The Champions Unlimited program aims to address this gap by facilitating an ecosystem of support and structure in their lives. This is achieved through partnerships with various community agencies, together with Borussia Dortmund and Rotary Club of Singapore, we can provide the young people with greater access to academic support, values development, and financial support. FootballPlus it’s more than a game.”

James Lee, President Rotary Club of Singapore states further “As we emerged from COVID restrictions, the Rotary Club of Singapore felt the urgent need to support the vulnerable, especially the young and disadvantaged. It is more beneficial to help them navigate an uncertain tomorrow, building a community where young people, especially those struggling or disadvantaged, feel safe in being a part of the community. Hence, with the invaluable partnership with Borussia Dortmund, the Rotary Club of Singapore joined hands with FootballPlus to provide a holistic programme through football to build resilience, empathy and a positive mindset to face future challenges confidently. We are proud to have supported FootballPlus in growing them as an organisation by furnishing two seven-a-side fields, connecting them to world-class football academy Borussia Dortmond and local agencies. Through this support, the sky is the limit for our young players to chase their dreams and achieve their aspirations.”

“You need three musketeers and the believe that friendships make the world go round to change lives of young underprivileged Singaporeans.  The three musketeers are Football Plus, Borussia Dortmund and Rotary Club of Singapore. We Rotarians have chosen Football Plus as the major project during my presidency because we believe that every girl and boy in Singapore no matter rich or poor deserves a great future. Rotary Club of Singapore raised 250.000 SGD funds to build a first-class pitch and to professionalize the service but what makes me very proud is that we Rotarians could volunteer to win the world-famous youth academy of Borussia Dortmund to become the partner of FootballPlus.  The slogan of BVB “ECHTE LIEBE“ or in English “TRUE LOVE” describes the new partnership best.” Adds Tom Wolf, Vice President Rotary Club of Singapore

FootballPlus Singapore was officially initiated in Oct 2013, after almost two years of planning and pilot running of various school and community programmes. FootballPlus received its charity status in June 2014 and attained IPC status in August 2016. Since its inception, FootballPlus has grown steadily in its outreach to young people in the community and schools. Our current work sees us working with 200 players every week throughout the year. The academy also works with many young people from disadvantaged and low-income families, giving out subsidies or full sponsorship to enable them to be involved in the weekly training.

Through its value-based football training programme, FootballPlus aims to impact the Football, Foundation and Future of every player.