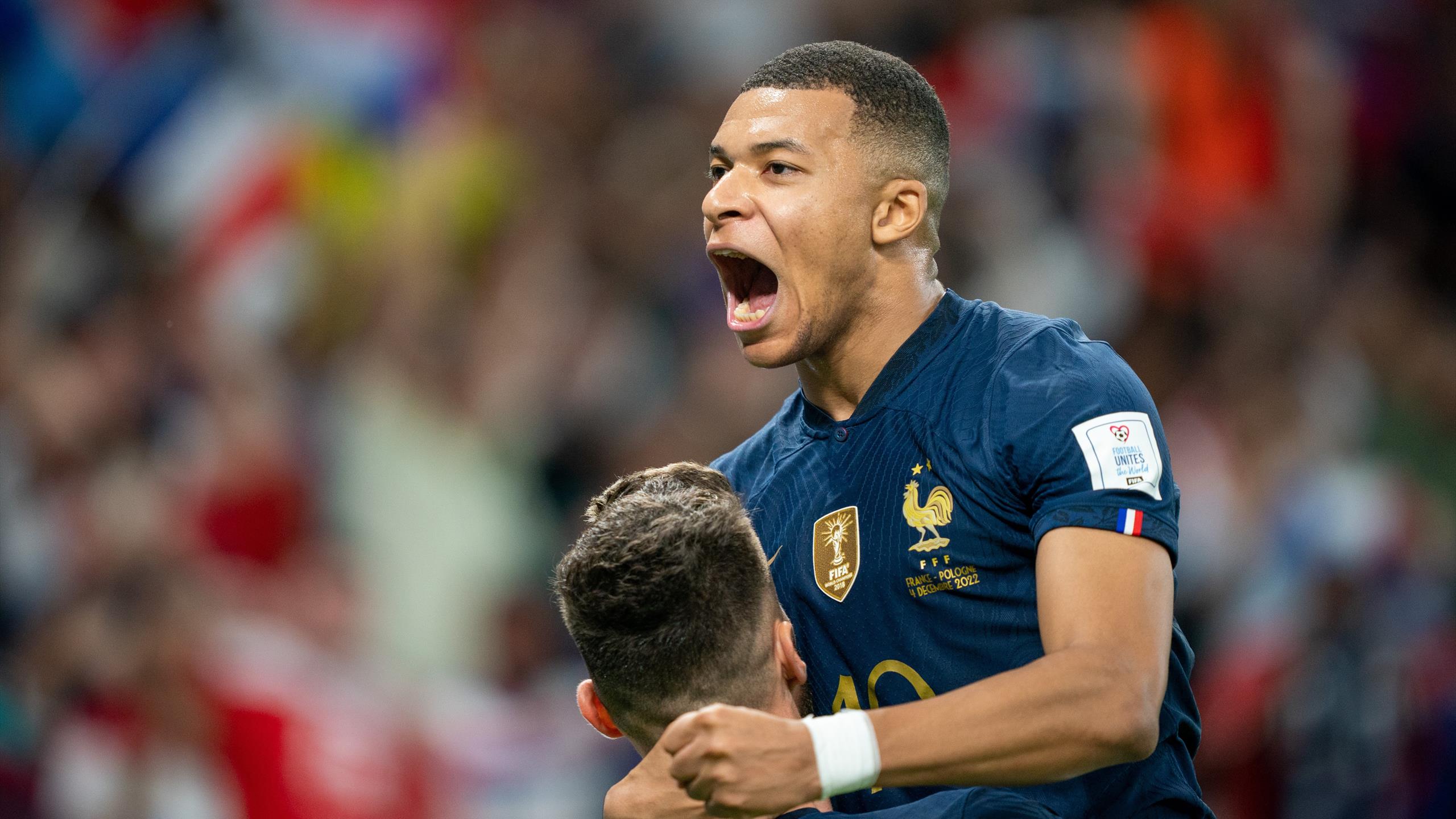 We did it, team. We made it through. A whole day without World Cup football. And now— wait, hang on. Another one? Oh come on. Who scheduled this World Cup? Ah.

Of course, a day without World Cup football certainly doesn’t mean a day without World Cup. A lack of on-field action only means more time for off-field intrigue. For instance, you may have heard that England are playing France on Saturday. You may also have heard that France have this player called Kylian Mbappe? Pretty good, so the rumours say. Somebody to think about.

And think about him, England most definitely are. Indeed, we are a little bit concerned that England are falling into one of the great traps of modern football. You may be familiar with the Curse of the Broadsheet Interview, which states that any surprising run of form must end the moment the player in question does a big interview with one of the sensible papers, perhaps accompanied by a photoshoot of them staring into the camera with a serious face on. Tales of footballing destiny shaped by hardship and struggle over breakfast, hammered by a relegation candidate in the afternoon.

With that in mind, we note that Gareth Southgate’s assistant Steve Holland has been talking to the Guardian about matters arising from Saturday’s game. “There are a handful of players you need to consider special attention to. Messi has been one and probably still is. You’d have to put Mbappe in that kind of category. We need to look at trying to avoid leaving ourselves in situations where he is as devastating as we’ve all seen.”

He goes on to reference Dani Alves at Barcelona: “There is a plus and a minus to every one. It’s that cat and mouse of: ‘Yes, we have got to try to deal with him, but we also have to try to exploit the weakness that his super-strength delivers.’ Trying to adapt your team to cover for that while still trying to create your own problems is the challenge.”

All very sensible stuff. And, if you’re reading the runes and supporting England, just a little bit terrifying. It’s a trap, of course. England have to say this stuff. Partly because media’s got to get done, and coming out and saying “Yeah, Mbappe scares us rigid, we just have to hope he gets lost on the way to the stadium” isn’t going to strike the right tone. And partly because, well, it’s true. England probably do back themselves. They’ve got every right to. They’re a good team. Kyle Walker’s a good defender.

However, this is football, and this is the World Cup. It’s a sport, and so success is all about talent, mentality, preparation, and all those other words that Mikel Arteta likes to write on whiteboards. But it’s also a soap opera, which means all the above could be trumped by whatever looks funniest at the time. England are doing the sensible thing in a sensible fashion, and they just have to hope that the universe is feeling in a sensible mood.

Otherwise: narrative boomerang to the face. Close your eyes, let your mind drift, and you can hear it. “Yes, we saw Steve Holland talking about how to stop Mbappe. We stuck the Guardian up in the dressing room. It seemed to make Kylian very angry…”

Fair play to the Rest Of Football, they got two days to get themselves some attention and they really went for it. The women’s Champions League delivered up a proper shock, as Bayern Munich humbled Barcelona 3-1 at the Allianz Arena. Quite the turnaround from last week, when Barca dismantled them 3-0 in Spain.

Still, as the old saying goes, even the mightiest struggle when they concede two early on and the opposition then defend like absolute heroes. (Quite a specific old saying, that one.) Indeed, Barcelona only got their goal after Maria Grohs, dealing with a backpass, found herself blindsided by the thought that, on a cosmic scale, humanity is nothing more than a statistical anomaly, a blip, a rounding error in the great churning equation of the universe. A faint piccolo trill in the grand symphony of the spheres.

Playing Barcelona can do that to a soul. But for Grohs and her defence, the other 89 minutes and 58 seconds (plus injury time) was a masterclass in focused and occasionally frantic concentration. Generally speaking, Barcelona Femení lose two or three games a season. Extremely good timing from Bayern to get this one done in front of a record crowd.

Jarring as this little break in the World Cup may be, it’s certainly quite useful. This is the moment, after all, when all the teams that had miserable group stages start to reckon with that failure. Coaches get sacked. Players retire. Grand promises are made about a bright new future. It’s nice to have a moment to think about all that.

So it’s farewell to Eden Hazard, who has announced his retirement from international football. We pause, briefly, so that we can all make the same uncharitable joke about when he actually stopped playing international football. And then we carry on to note that 126 caps is quite remarkable going, particularly for a player that doesn’t turn 32 until January.

For the Warm-Up’s money, and with all due respect to Kevin De Bruyne and Romelu Lukaku, it’s always been Hazard that has defined this now-passing golden generation. (Does that need inverted commas? It’s probably too soon to say for sure.) Both at the high points and now here at the end, as he and his team grind to a halt looking weary and somehow unfulfilled. He has, of course, been the victim of a brutal one-two punch from the footballing gods: first a cascade of injuries and conditioning issues, and then the emergence of Vinicius Jr. The job he was brought to Real Madrid to do is being done better by somebody younger. Time comes for us all.

And he’s still only 31! All footballers are different, of course, and not all of them face down the aging process with the grim determination of James Milner. If Hazard chose to retire to a life of fine cheese and good wine, he could do so with his head held high and his medal collection twinkling. But he was such a pleasure to watch, back when he was himself: there’s a particular kind of footballer that manages to both slalom and bustle, exemplified by Maradona, and that’s how Hazard moved. Stocky silkings.

And so for entirely selfish reasons we’d like him to find a level where he can still do that, for as long as he can, purely so we can watch occasional highlights and say “Ah, lovely.” That’s got to be better than cheese and wine, right?

Hey, you know that angry man off the television? Good beard, hates dancing? Roy Keane, that’s the one. Did you know he used to be a footballer?

Here, for your delectation, is the oldest existing footage of Manchester United, from December 6, 1902. Everything is present: huge shorts, flat caps, picket fences to keep the fans back and tobacco adverts on the stands. After the game, which United won 2-0, club secretary James West could not be drawn on the Cristiano Ronaldo situation.

You may have noticed one or two pieces knocking around about the very pleasant experience of being a tourist in Qatar. Here’s Miguel Delaney over at the Independent, with some thoughts on just why so many visitors are having such a good time. It’s built that way. And it’s built that way on people.

“The Independent has seen more than one case of someone marvelling at how nice ‘the locals’ are, only for that local to be a migrant worker. It can’t be stressed enough how these labourers are denied the most basic rights of the locals – like the ability to change jobs – and can virtually never be citizens. And, of course, it is their job to be nice. To be more than nice. Any kind of dissent or drop in attitude isn’t tolerated.”

More from the women’s Champions League this evening, including Wolfsburg vs. Roma and Real Madrid vs. Chelsea. And it’s Gillingham vs. Dagenham & Redbridge in the FA Cup second round replay.

The bad news is, there’s no World Cup today. The good news is that Andi Thomas will be back tomorrow, so — you’re still thinking about the bad news, aren’t you?

Southgate has given himself a problem – The Warm-Up