Sadio Mane in, Mohamed Salah out of Africa Cup of Nations Dream Team 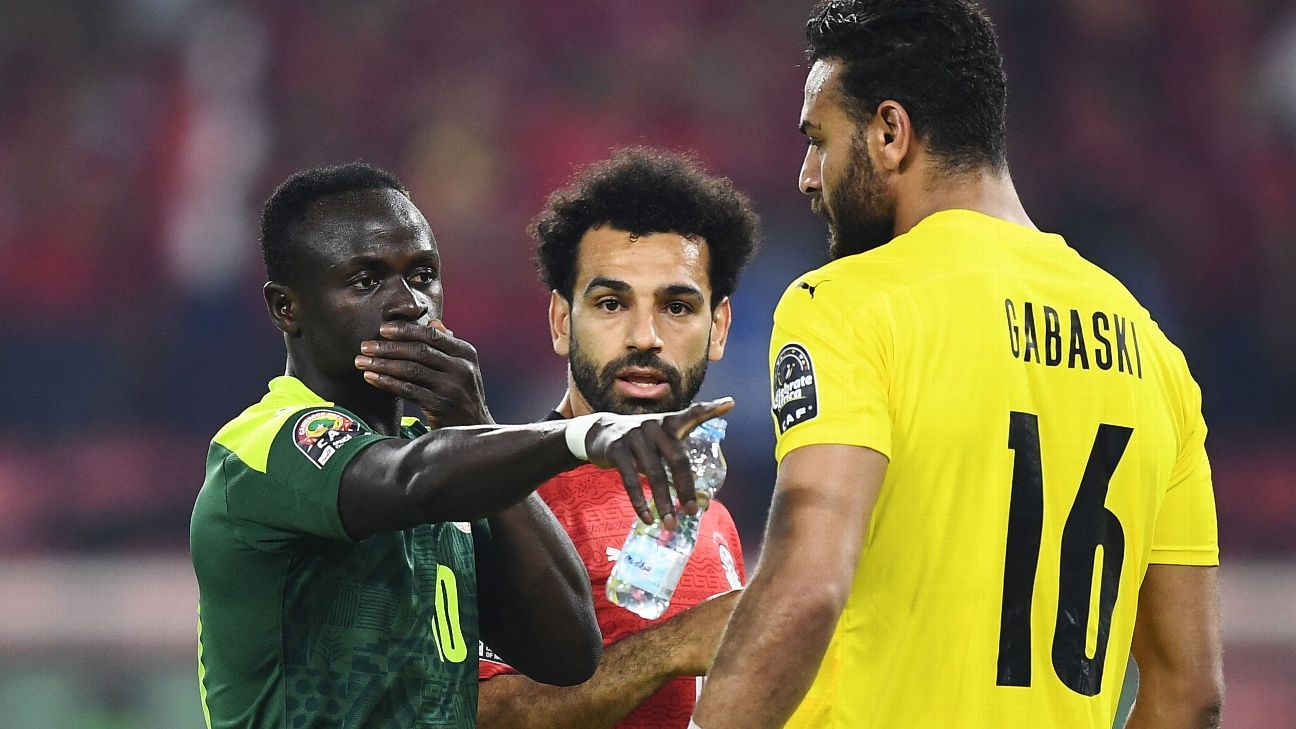 Who makes ESPN’s Africa Cup of Nations Dream Team following a month of thrilling football at the biennial continental showpiece?

Edouard Mendy won the Goalkeeper of the Tournament award — and he did keep five clean sheets — but Gabaski’s heroics after coming into the Egypt team to replace injured Mohamed El-Shenawy secure him our starting spot between the sticks.

The 33-year-old had made just one competitive full international in a decade before going into the side for the final two minutes against Ivory Coast, and he promptly saved Eric Bailly ‘s penalty to send the Pharaohs through.

He suffered injury himself during extra-time of Egypt’s quarterfinal vs. Morocco — having largely kept the Atlas Lions at bay — and made several superb stops as the Pharaohs kept clean sheets across 240 minutes in both the semifinal and the final.

Man of the Match in the final against Senegal, Gabaski saved eight penalties through the course of the tournament — winning two shootouts — and he wasn’t beaten from open play in any of his four appearances.

Criticised for his performance against Ghana, Hakimi improved dramatically in the victory over Comoros and followed that up with outstanding displays against Gabon and Malawi.

In both contests, he netted sublime free-kicks from near-identical positions, securing a point against the Panthers and sending Morocco through against the Flames.

He was again dynamic against Egypt in the quarterfinals, but he was unable to repeat his heroics for a third time as the Lions tumbled out of the competition.

Cameroon’s Collins Fai is unfortunate to miss out, while Issa Kabore of Burkina Faso also deserves a mention.

A few nervous moments against Equatorial Guinea aside, Koulibaly reaffirmed his standing as Africa’s finest centre-back with a largely blemish-free tournament.

He entered the competition on the back of an injury absence with Napoli, but played his part in four clean sheets as Senegal conceded just twice from open play in winning the title.

Koulibaly got the assist for centre-back partner Abdou Diallo as Senegal struggled to find a way through Burkina Faso in the semifinals, and he was imperious in the final against Egypt.

Has settled seamlessly into international football, and proved to be an ideal counterbalance for Koulibaly in the heart of the champions’ backline.

The pair anticipated each other’s movement and decision-making well, with Diallo’s composure and talented left foot giving the defence a lovely balance.

The Paris Saint-Germain man — and former France Under-21 international — also opened the scoring for Senegal in the 70th minute of their semifinal against Burkina Faso.

Squeezing out Saliou Ciss, Tolo was a lively presence down Cameroon’s left flank, consistently seeking to run at the opposition defences and create space in which Vincent Aboubakar could thrive down the middle.

His interplay with Karl Toko Ekambi and his overlapping runs were key weapons in Cameroon’s armoury, and Burkina Faso’s inability to deal with his darting acceleration in the box helped to turn the tide of the opening match as he earned a penalty that Aboubakar converted.

Tolo didn’t deserve to be on the losing side in the semifinal against Egypt, having shackled Mohamed Salah for the duration.

Sangare was part of an excellent Ivorian midfield trio, alongside Jean Seri and Franck Kessie, reminding observers why he had been tipped for a move to the likes of Arsenal and Tottenham Hotspur not that long ago.

His frame and physical presence make him an immense obstacle in the heart of the park for the Elephants, and he made a difference going forward as well — registering an assist against Sierra Leone and adding the Ivorians’ second in their 3-1 victory over reigning champions Algeria.

One of the genuine positives of Toni Conceicao’s reign as Cameroon coach has been the emergence of Hongla, who kept the impressive Pierre Kunde Malong out of the side with his monstrous performances in the heart of the park.

His well-rounded displays in Cameroon’s engine room helped to fuel the hosts’ vibrant attacking displays, with Hongla not afraid of the grittier side of the game while ending the tournament with three assists.

He struggled to impose himself in the semifinal against Egypt — and he nearly played in Salah for the opener — but his partnership with Andre-Frank Zambo Anguissa was key to Cameroon’s strong campaign.

Overcame an early penalty miss in the final to score the winner in the shootout as Senegal ended their wait for a maiden Nations Cup crown.

Mane struggled during the group stage — a combination of the heat and a swathe of absentees, perhaps — although he did net the 97th-minute penalty against Zimbabwe in the Teranga Lions’ opener to ensure they began their campaign with all three points.

But he improved as Senegal grew through the knockout stages.

He overcame a head injury to open the scoring against Cape Verde, forged the opening goal against Equatorial Guinea in the quarters with a fine assist for Famara Diedhiou, and then scored and assisted against Burkina Faso in the semi.

A worthy winner of the Player of the Tournament award, the Nations Cup wasn’t exactly the apotheosis of Mane’s career… but it was pretty close.

Boufal stepped into the breach for Morocco in the absence of playmaker Hakim Ziyech, and he finally delivered the kind of tournament performance that has eluded him in the past.

Now adding an end product to his fantasy dribbling, only Youcef Belaili registered more chances created during the course of the tournament than Boufal, who also weighed in with three goals in five appearances.

He set the tone for Morocco with the late winner in their opener against Ghana, and came off the bench to equalise against Gabon in their final group game.

The Angers playmaker struck the early penalty against Egypt as Morocco look to take control of their quarterfinal, but Vahid Halilhodzic’s side were unable to capitalise on their early advantage.

His contribution was somewhat overlooked amid Aboubakar’s flurry of goals, but Toko Ekambi’s five strikes were almost as important as his teammate’s haul.

His equaliser against Ethiopia helped to boost Cameroon after a shocking early setback, and he also opened the scoring against Comoros when the hosts were in danger of becoming a laughing stock.

Cutting in from the left, and appearing late in dangerous areas, opponents struggled to cope with Toko Ekambi’s movement and eye for goal, and his two-goal display against Gambia in the quarterfinals was among the best individual performances of the tournament.

Aboubakar claimed the AFCON Golden Boot having netted eight goals across seven appearances, scoring only one fewer than Zaire great Ndaye Mulamba bagged at the 1974 edition in Egypt.

He scored both goals in the 2-1 victory over Burkina Faso, grabbed another double as Ethiopia were thumped 4-1, and then got the opener against Cape Verde to round off a hot group stage.

He registered an assist and a winner as the goalkeeper-less Comoros were defeated 2-1 — an evening overshadowed by the Stade d’Olembe tragedy — although he misplaced his scoring boots when they were needed most, in the semifinal against Egypt.

Conceicao turned to him at the halfway point of the third-placed playoff, with Cameroon trailing 3-0, and Aboubakar produced a masterclass as he netted two more goals, and the opening penalty in the shootout, as the Indomitable Lions won the bronze medal.

In this article:Arsenal, Featured, Paris Saint-Germain