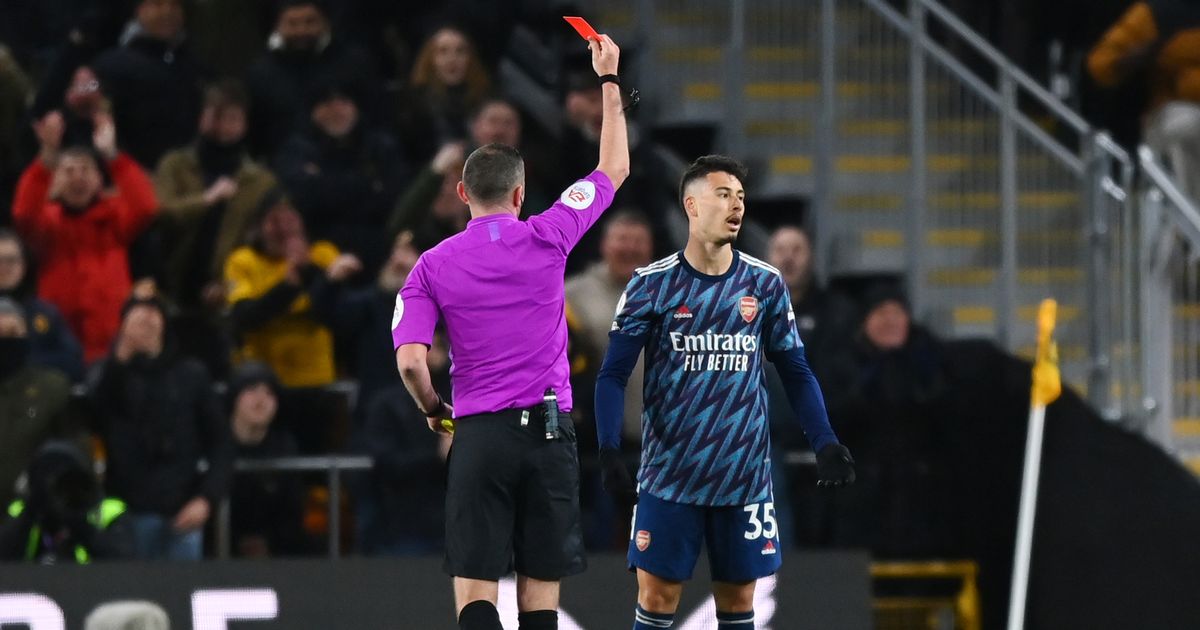 Arsenal winger Gabriel Martinelli was sent off against Wolves on Thursday evening after receiving two yellow cards in the space of a few seconds.

The Brazilian was shown his marching orders in the 69th minute after losing possession and trying to prevent Daniel Podence taking a quick throw-in then barging down Chiquinho in the blink of an eye.

As advantage was given for the first offence, Martinelli didn’t receive either of his bookings until after his cynical foul on Chiquinho.

In one of the strangest sights in Premier League history, referee Michael Oliver showed Martinelli his first yellow – moved his arm down – and then showed him his second yellow.

The decision was met with cheers from the home fans at Molineux and Arsenal manager Mikel Arteta was left to reshuffle his team.

What’s your opinion of Gabriel Martinelli’s red card? Let us know in the comments below!

Gabriel Martinelli was sent off against Wolves on Thursday
(

Arsenal were leading 1-0 at the time thanks to Gabriel Magalhaes’ first-half goal. Despite Martinelli’s dismissal, they managed to hold on for all three points.

Speaking at full-time, Arteta was disappointed with Martinelli’s lack of discipline. “We put ourselves in trouble with the red card and we had to dig in,” he said.

“Wolves threw seven players up front and it was difficult to maintain a clean sheet but we defended the box extremely well.

“We made it even more difficult for ourselves playing with 10 men. We suffered a lot in the last 10 minutes. I’ve never seen something like it.”

Speaking ahead of the game, Arteta urged his players to improve their discipline.

“We played three games out of five with 10 men, and if that’s one of the things in the last 17 games that we continue to do, our chances to be where we are going to be really low,” said the Spaniard.

“We have to play with 11 players on the pitch. We need most of the players available and fit as much as possible. We need to maintain the togetherness.

“We have to keep improving our game model and we have to go game by game.

Mikel Arteta was not happy with Martinelli’s dismissal
(

“To do that we have to be super focused and we have to perform on the day and the rest will come because we are in the position where it’s possible and we can achieve it but only if everybody has that mindset.”

On how he can ensure his players maintain their discipline, Arteta added: “I think there are a few factors.

“First of all how we raise them throughout our academy, the type of characters that we build and that’s the best way to do it in that pathway.

“So when you see certain behaviours daily, they become habits and those habits are easy to follow.

“Once they’re integrated, I don’t think anybody can escape from that and try to do something different, because it gets exposed.”