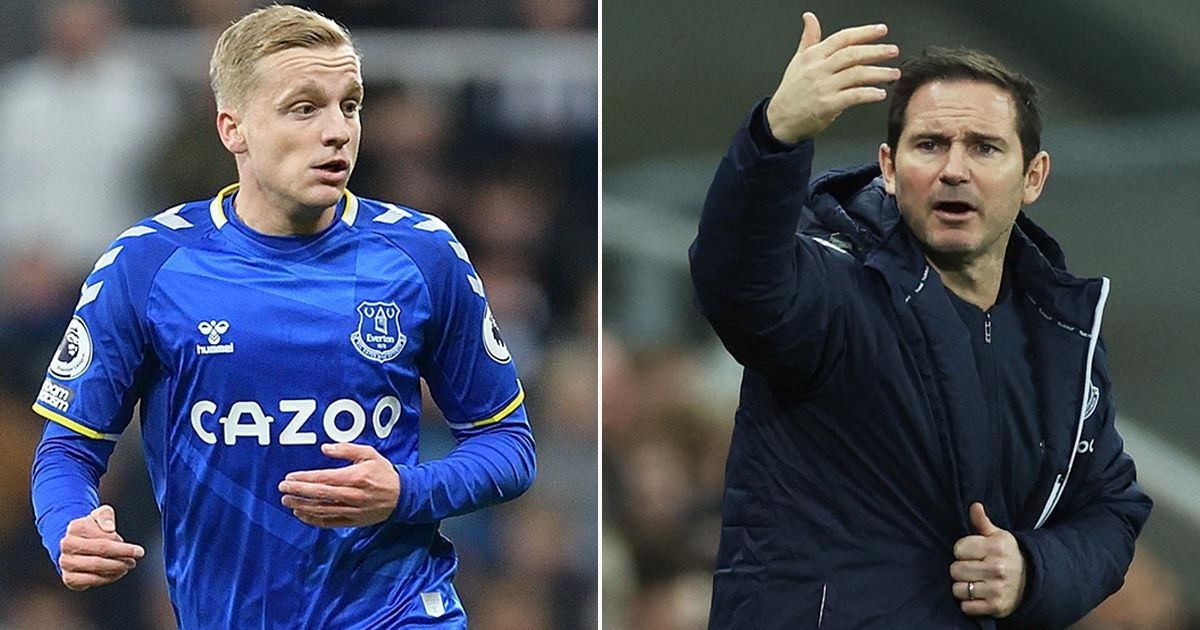 Frank Lampard insists Donny van de Beek will play an “integral” part in Everton’s relegation battle after making his debut from the bench on Tuesday evening.

The Dutchman was introduced in the 60th minute of Everton’s Premier League game against Newcastle at St James’ Park but failed to make an impact during the 3-1 defeat.

Van de Beek spent the first half of the season on the bench, failing to make a league start for Manchester United before joining the Toffees on loan in January.

Despite not starting on Tuesday, Lampard insists Van de Beek will play regularly between now and May to help Everton salvage their season.

The Merseyside team are currently 16th in the Premier League, just two points ahead of Norwich in the final relegation spot.

Will Everton stay up? Let us know in the comments below!

Donny van de Beek made his Everton debut against Newcastle
(

“Donny came on at a difficult time in the game, let’s be honest,” claimed Lampard. “He made us tick a bit. He’s only going to get better, I know that.

“Him not starting tonight was more a reflection on the performance on Saturday. But he will be integral for us this season.”

Dele Alli, who was signed permanently from Tottenham on deadline day, also made his debut against Newcastle from the bench.

He was introduced in the 25th minute after an injury to Demarai Gray.

“I thought there were moments in the game where they both [Alli and Van de Beek] had good moments,” added Lampard.

“With Dele, again there was some nice bits. We were asking a lot to expect him to hit the ground running with the time he’s had out.

“We will stick with him. We saw little bits that we liked, I loved his penetrating runs and link-up play. They will both get better and better.”

Everton’s next two league games are against Leeds at Goodison Park and Southampton at St Mary’s, before they welcome champions and leaders Manchester City.

The Toffees have won just one of their last 15 Premier League games, needing a last-minute screamer from Gray to beat Arsenal 2-1 at Goodison Park in December.

Van de Beek started the game from the bench, alongside Dele Alli
(

“Dele came on and he didn’t really have an impact,” Boyd told Sky Sports.

“Van de Beek, the exact same. We mentioned those two because they were the two big signings of the window.

“But, for me, looking at it. They are two players that, when you are on top of a game, they can make a difference. When you are in a relegation battle, then I’m not too sure.

“Frank Lampard will be worried because that’s as poor as I have seen Everton.”