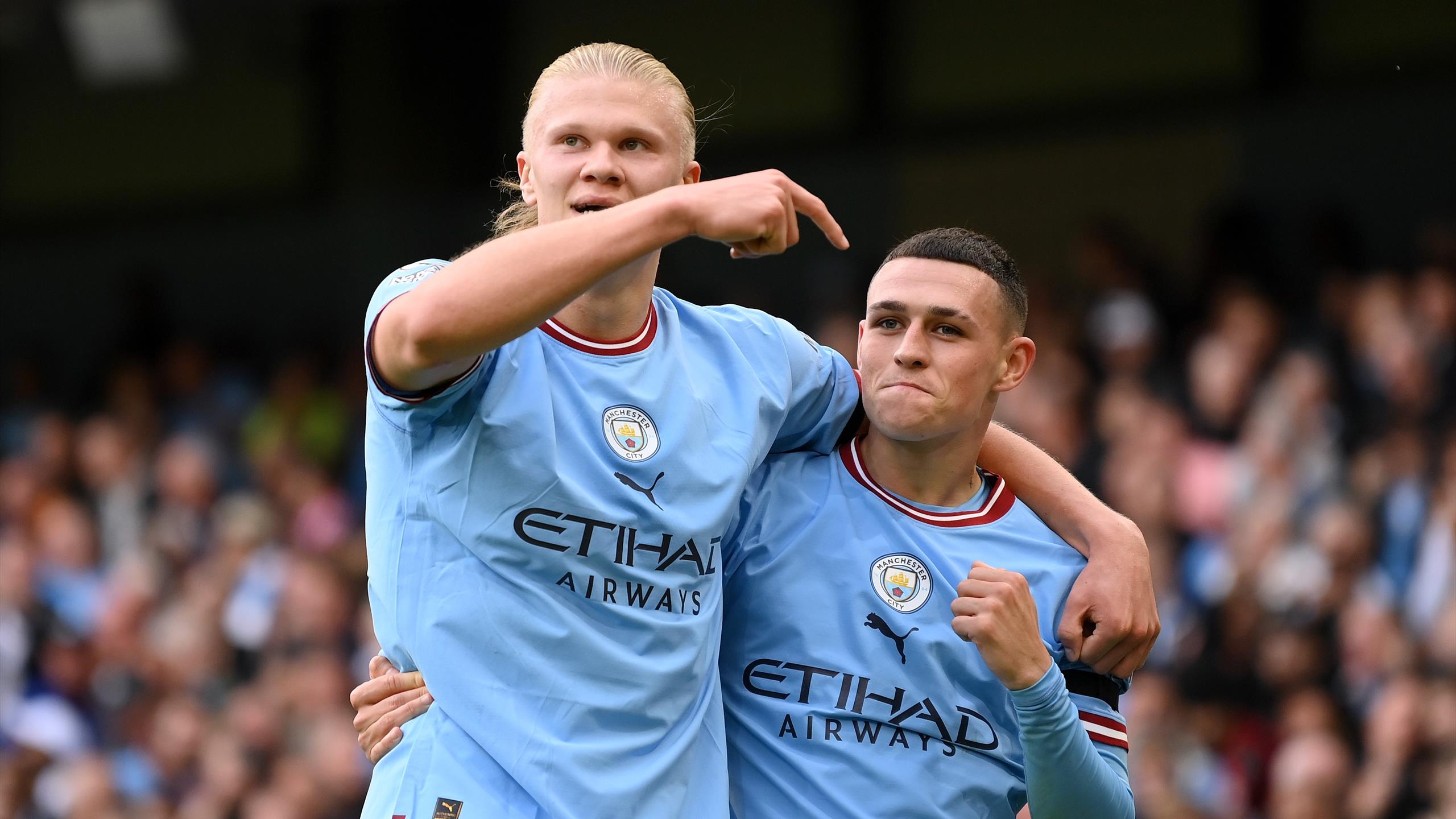 Phil Foden’s three goals and a dominant display from Kevin de Bruyne were the other highlights of a whirlwind encounter. A first-half flurry killed off a nervy United as Pep Guardiola taught Erik ten Hag a stern lesson on his Manchester derby debut.

Foden opened the scoring with the match just eight minutes old, sweeping home a Bernardo Silva pull-back as City forced the issue down the flanks, terrorising Diogo Dalot and Tyrell Malacia, both booked in the early exchanges.

Haaland powered home a de Bruyne corner with an unchallenged header on 34 minutes, doubling his tally just three minutes later. A trademark de Bruyne burst through the heart of the United midfield saw a petrified defensive line drop deeper and deeper, allowing the Belgian to play a beautifully clipped pass beyond Raphael Varane, with the Norwegian peeling off the Frenchman at the far post, taking David de Gea by surprise at his near post.

Foden was back on the goal-scoring act on 43 minutes as Haaland turned provider, fed by another de Bruyne drive through the gears as the number nine drifted left to kill the game off.

Ten Hag reacted with a half-time switch, replacing Malacia with Luke Shaw, and the England left-back offered more thrust down that side as United looked to ease their embarrassment.

Antony curled a beauty beyond his compatriot Ederson after 56 minutes, a goal that no-one saw coming after further United uncertainty following the restart.

United had hope after that moment of magic, but they were put well and truly back in their place by Haaland, who guided a low Sergio Gomez cross beyond David de Gea on 64 minutes to seal his hat-trick, netting his 14th goal in just eight games in the top flight.

Cristiano Ronaldo could only watch on as Foden compounded United’s misery, helping himself to his third of the game as Haaland turned provider once more, finishing with aplomb inside De Gea’s near post as Shaw played his England colleague onside.

Martial pulled one back in the 84th minute before the Frenchman got his second from the spot in stoppage time after he was felled by Joao Cancelo, netting into the top right corner to make it 6-3.

This result is a humbling one for ten Hag and United after their recent optimism: they slide into sixth, while City move to within one point of table-topping Arsenal.

Erling Haaland and Phil Foden both have a match ball to fight over as their electrifying displays helped dispatch a very-much below-par Manchester United.

It was their ruthlessness in front of goal, combined with the technical brilliance of their backing singers and the tactical mastery of their mercurial manager that saw them galaxies ahead of their neighbours in this one.

Haaland came into this game yet to experience a Manchester derby, and he got the dream start with three well-taken goals in this one.

Foden demonstrated his own goal-scoring knack with two poacher-like finishes and a beautifully composed third to round off a near-perfect performance to make up for two disappointing displays in an England shirt during the international break.

PLAYER OF THE MATCH – ERLING HAALAND

It could’ve been Foden, but it couldn’t really be anyone else.

A truly awesome performance that demonstrated everything that Erling Haaland is about.

Pace, strength, intelligence in his movement, and most importantly, that clinical nature in front of goal, the Norwegian proved why he is the name on everyone’s lips in the footballing world.

He terrorised the United defence with his athleticism and his movement, paving the way for de Bruyne to weave his majestic magic behind him, as was on show for City’s third.

8′: GOALLL!!! There’s the early goal, and it’s Phil Foden! A clever piece of interplay between Grealish, Ake and Cancelo, before feeding Silva down the left, and the pull-back is swept beyond De Gea at the near post by Foden. 1-0, perfect start.

37′:GOALLL!!! There’s three, and it’s that man once more. Erling Haaland, yet again. Sliding in at the far stick, Kevin de Bruyne scoops a beautiful ball out of nowhere, as the Norwegian peels off the back of Varane to half-volley inside De Gea’s near post. 3-0.

43′: GOALLL!! It’s four, it’s Phil Foden! They’re carving Manchester United apart, and the right-winger sneaks in at the far post to tap home. What a goal, stemming from a typical de Bruyne run through the heart of United, out to Haaland wide left, and the centre-forward has the awareness to see Foden ghost in at the back stick to make it four.

56′: GOAL! Antony bends a beautiful effort beyond Ederson with a wonderful solo goal. No chance for his compatriot, as he chests it down, cuts inside and scores a beauty! 4-1.

64′: GOALLL!!! But he’s on target with that one! Hat-trick hero once more, Haaland makes it five. Simply stunning, as he sweeps home a classy Gomez pull-back after great interplay between Grealish and de Bruyne to initiate the move. 5-1.

73′: GOALLL!!! Two hat-tricks here, and Phil Foden has his. Haaland turns provider once more, Shaw plays Foden on, and the England international finishes with aplomb inside de Gea’s near post. 6-1.

84′: GOAL! Another consolation for United, as Shaw and Fred link up down the left, and Ederson’s parry is nodded home by the Frenchman.

90′: PENALTY! Martial is felled by Cancelo, and Michael Oliver points to the spot. // GOAL! Martial makes no mistake, right into the top corner! 6-3.