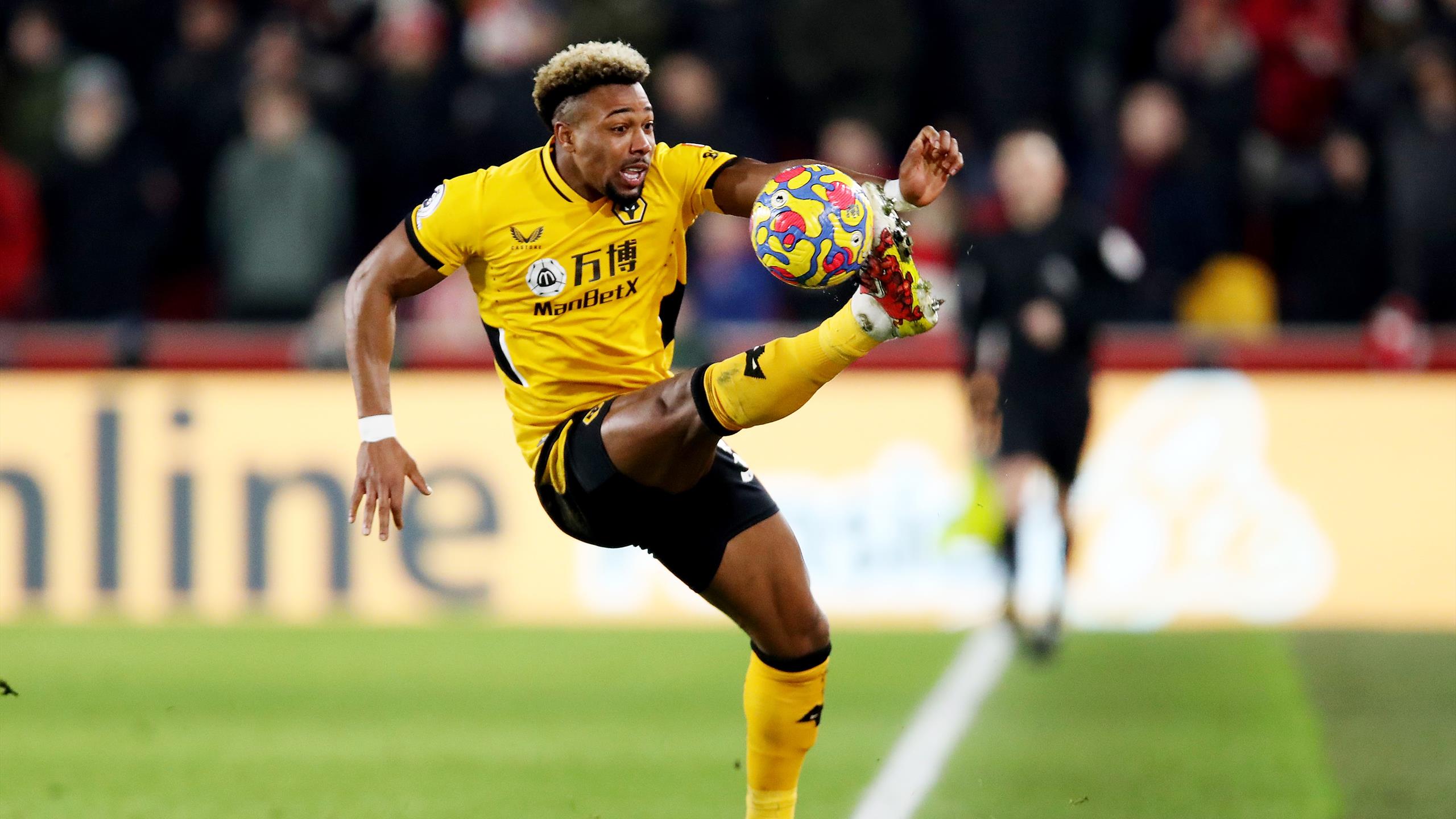 That’s Not How You Spell “Tottenham”

We’ve been waiting for this all window, so: congratulations to Adama Traoré on his big move to, er, wait. Hang on. It says Barcelona here. Does this mean we’re not going to get to see the Adam Traoré Wing Back Experiment?

All makes a lot of sense for Barcelona, of course. Traoré fits precisely what Xavi is looking for in a player: he’s played for Barcelona before, he knows what Barcelona means, he has Barcelona DNA laced through his Barcelona skeleton, when he blinks he sees Johan Cruyff on the inside of his eyelids, when they say “More Than” he says “Club”. More Than. Club. More Than. Club. Also he’s pretty useful with a football, which is a bonus.

As for how they can afford to register him, the fact that this is a loan suggests that they’re squeezing a chunk of his wages out of whatever remains of the breathing room they negotiated for Ferran Torres, with a view to doing some more creative accounting come the summer. That’s assuming Ousmane Dembélé doesn’t get shunted on in the next few days. Hey, maybe he could play at wing-back…

Could this be the rarely seen transfer that makes total sense for everybody? Normally, if Barcelona swooped down and made off with a player from mid-table, they’d leave behind a gutted wreck of a team. But Traoré’s been a more a sub than a starter this season, with only the one goal to his name. Bruno Lage’s start at Molineux has been all the more impressive for the fact that his most skilful and perhaps most dangerous player hasn’t really been crucial.

The Warm-Up’s guess is that Traoré will have a lot of fun, out on the wing for Barcelona. Also that Barcelona will have a lot of fun with him: it’s early days for the Xavi revolution, but adding in somebody explosive and unpredictable feels like a useful move. And if he doesn’t work out, then he’ll come back to England in the summer, and maybe Tottenham can have another crack at turning him into the next Stephen Carr.

For a club currently fifth in the table, for a club currently not sure of Champions League football next season, Juventus sure are throwing their weight around. €75m of weight, to be reportedly precise, for Dušan Vlahović, who would have been out of contract at the end of next season. Fiorentina got paid. And so, we’re guessing, did an agent.

Of course, you can’t put a price on annoying Arsenal. And with Federico Chiesa injured, Paulo Dybala in a contract situation of his own, Moise Kean inconsistent, and Álvaro Morata burdened as always by his existential agonies, what else are Juve supposed to do? Try to win games with this pitiful collection of extravagantly gifted, highly expensive attackers? The indignity!

Still, if Vlahović continues to play the way he’s been playing and score the way he’s been scoring — 20 goals in 24 games so far this season — then Juve aren’t just buying the best striker in the league right now. They’re buying the best striker in the league for the next ten years. Which is some very Juventus-like behaviour. The key to being a superclub is to act like a superclub, at all times and in all contexts, even when you’re 11 points off the title pace and a point behind Atalanta.

All transfers are dominoes. This move leaves Juventus just a little bit top heavy, and the rumour mill is trying to rebalance things by moving Morata on to… somewhere? Anywhere? Of course he’s still an Atlético Madrid player, which makes everything a million times more complicated.

Barcelona makes the most footballing sense, but they’re skint, and we’re guessing Atléti won’t just donate him to a rival and then cover his wages, as an extra favour. Newcastle makes the least footballing sense, but they are very rich. And then, apparently, there’s Tottenham, by far the Warm-Up’s preferred choice. Not for any footballing reason. We just want to see what it might do to Antonio Conte’s calm and collected demeanour.

Drawing Squares In The Air

To briefly abandon the serious business of transfers for football’s other serious business — VAR — we were treated to a masterclass last night as Ecuador hosted Brazil. Because as everybody knows, VAR stands for Very Anti-Ecuador Referee.

Twice the referee pointed to the spot and awarded Ecuador a penalty; twice he was dragged over to the Video Screen of Undoing and persuaded to think again. Twice the referee showed Alisson a red card; twice the ref went jogging off, then came jogging back and said “Oops. You can stay.”

Were the decisions correct? Well. We don’t know the laws well enough to say, for example, that a goalkeeper charging out and forearm smashing a striker in the head certainly is a foul and a red card. We certainly don’t know if him feathering the ball on his way through the player makes a difference. The words “reckless” and “dangerous” — not to mention “astonishingly stupid” — would seem to apply, but we’ve been watching football long enough to know that words mean different things when they become laws.

It’s an odd thing, VAR. It’s not just that it breaks up the game as it’s going on, rendering every big decision provisional and catching every cheer in the throat. It’s that it goes to occupy so much space afterwards as well. It’s only natural, of course, to think about what might have been: most football happens in the imagination of those that follow. But now those conjectures were real, for a moment, until they weren’t. Games end up haunted by these lost moments.

And you try thinking about anything else but ghosts, when there are ghosts right there. A game where Brazil’s Emerson Royal achieved two yellow cards in just 20 minutes, and Ecuador’s Alexander Domínguez got his in just six, and Casemiro scored by two-foot tackling the ball… and all we can think about is the things that did and then didn’t happen. Bad enough it clogs up the games; now it’s stuck in our head as well.

Last night, Beth Mead scored a delightful free-kick against Brighton to secure three points for Arsenal and move them four points clear of Chelsea at the top of the WSL. And it got us thinking. We have “ping” for a ball hit hard and straight, but we really need a word for shots that curve and dip like this one. Something delicate yet firm, like “pock”.

Today is Gianluigi Buffon’s 43rd birthday. Though given that he doesn’t seem to be subject to time in the same way as the rest of us, perhaps the concept of a “birthday” doesn’t make a huge amount of sense. Anyway, here’s highlights from his debut, back when he was 17 (in human terms). George Weah? Roberto Baggio? A kit straight from the psychedelic depths of the 1990s? No problem.

Once of this parish, Nick Miller is now over at the Athletic, and we join him there for this interview with Benik Afobe. It’s a tough read, as Afobe reflects on the terribly early passing of his daughter and the impossibility of grief within English football. But as our Nick notes, “What Afobe suffered is not something a person recovers from. They just cope. And one of the ways Afobe has chosen to cope is by talking.” And what he has to say is worth listening to.
Advertisement. Scroll to continue reading.

Imagine if I started saying, ‘Oh, I didn’t play well, I didn’t run around as much because I had zero energy, because I’ve been up all night thinking about my daughter?’. I didn’t want to play that card of, ‘I’m not playing well because my head’s not right’.

A strange blend of international and domestic matters today. We’ve got Huddersfield vs. Stoke in the Championship and Nantes vs. Brest in the Coupe de France. And we’ve also got Colombia vs. Peru and Venezuela vs. Bolivia in CONMEBOL qualifying. Something for everyone.

Have a peaceful and relaxing weekend, or an unhinged and turbo-charged end of transfer window. Whatever works for you. We’ll see you Monday.