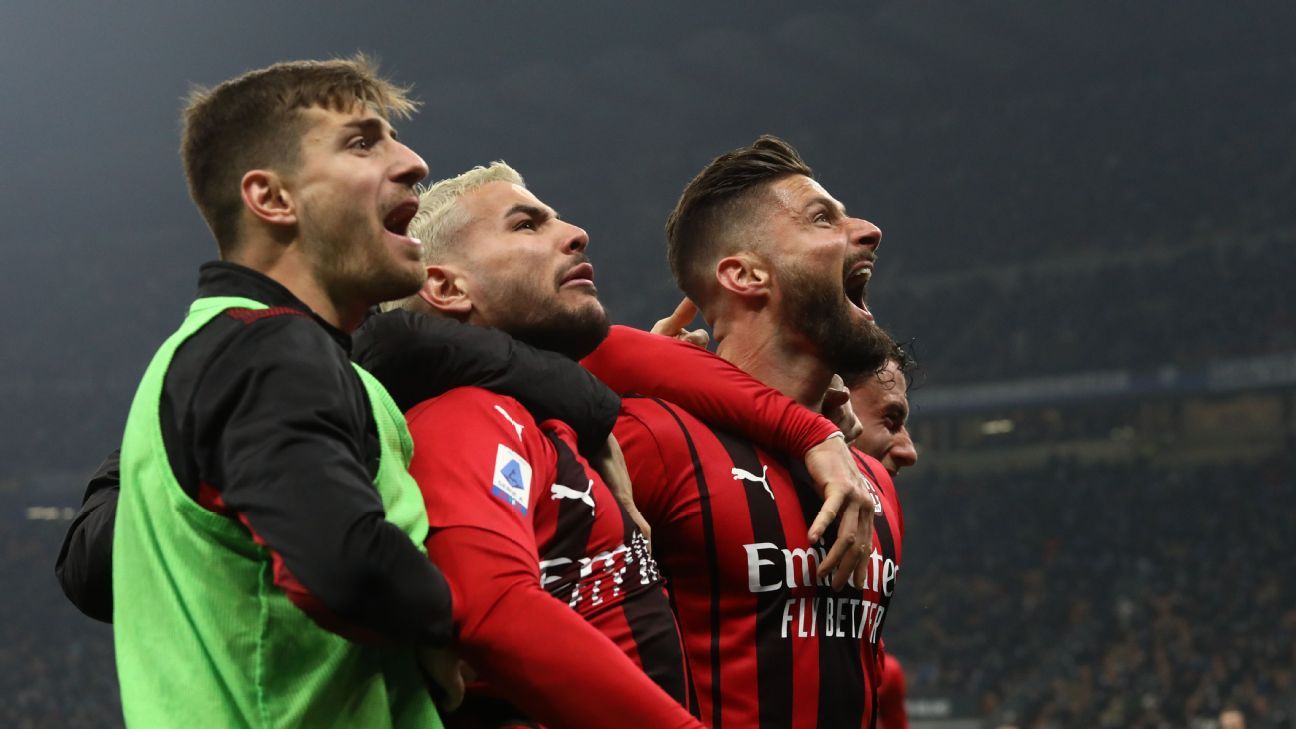 Olivier Giroud scored twice in the space of three minutes to earn AC Milan a 2-1 comeback win over Serie A leaders Inter Milan on Saturday, sending the Rossoneri one point off top as the champions’ 14-match unbeaten league run came to an end.

Ivan Perisic put Inter in front at a raucous San Siro late in the first half, breaking Milan’s resistance after their goalkeeper Mike Maignan pulled off two superb saves.

But Giroud, starting in the place of Milan’s injured top scorer Zlatan Ibrahimovic, nudged in an equaliser in the 75th minute before finding the bottom corner three minutes later to turn the game on its head.

“I was a bit frustrated in the first half, like the whole team, because we didn’t play well and we knew that,” Giroud told DAZN. “After the break we showed a great team spirit. We are back!

“The road is still long. We are in the race, but there are a lot of games left to play and Inter remain on top.”

It was only the second defeat of the season for Simone Inzaghi’s side, but they remain top on 53 points, one ahead of their city rivals with a game in hand.

“It’s normal to be disappointed, we all know how important the derby is,” Inzaghi said. “We lost undeservedly, but that is football. We need to analyse it calmly and see where we were lacking, because objectively speaking, we gave away practically nothing up to the first goal.”

Inter came into the game as favourites, as their imperious league form contrasted with a Milan side that drew with Juventus and lost to Spezia in its last two games.

The Nerazzurri, who were the “home” team for the day at San Siro, looked the likelier winners throughout the first half.

Denzel Dumfries headed in early on, but the goal was disallowed for an offside in the build-up, before Maignan readjusted his footing to keep out a deflected Marcelo Brozovic shot.

Nicolo Barella drilled a shot narrowly wide before Maignan again saved Milan with a superb stop on a close-range Dumfries effort, although his Inter counterpart Samir Handanovic also sprang into action when he flew to palm away a Sandro Tonali shot.

Milan’s defensive efforts were eventually undone in the simplest circumstances, when Perisic was left unmarked at a corner to guide a volley in.

A cagey second half offered few big chances until Giroud transformed the game.

The Frenchman was quickest to react to a deflected Brahim Diaz shot, stretching at the back post to tap in a finish, and three minutes later he turned his marker in the box and guided in a calm finish.

Theo Hernandez was sent off deep in stoppage time for a reckless lunge on Dumfries, but Milan did not need to hang on for long to record their first Milan derby comeback win since February 2004.

In this article:AC Milan, Bundesliga, Featured, Juventus, Serie A