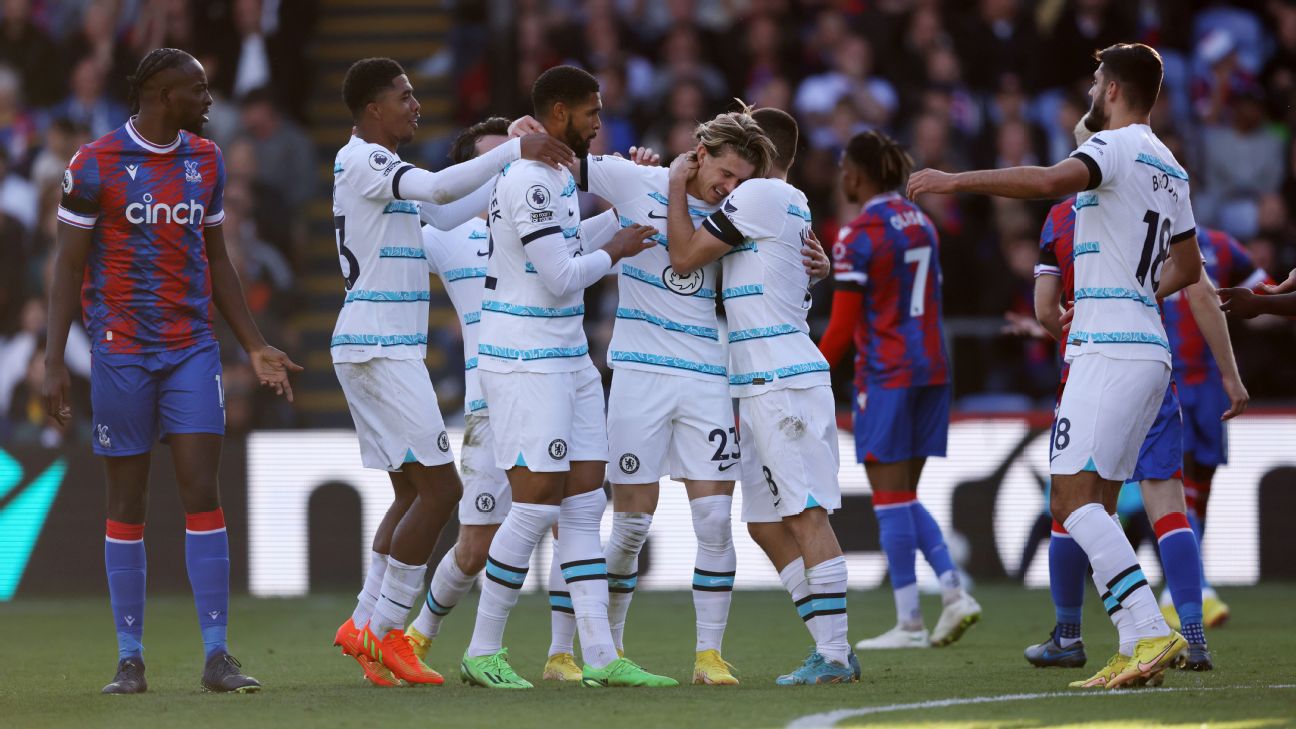 LONDON — Graham Potter’s first Premier League match in charge of Chelsea finished in a 2-1 victory against Crystal Palace at Selhurst Park thanks to Conor Gallagher’s stunning late finish assisted by Christian Pulisic. Gallagher had received a brilliant reception from the Palace fans as their reigning Player of the Year after his loan spell there last season, but he broke their hearts with a brilliantly measured strike from the edge of the box in the 90th minute to give Potter the three points.

Crystal Palace can feel aggrieved at leaving this with nothing. They took an early lead through Odsonne Edouard after just seven minutes and could’ve added another soon after through the brilliant Eberechi Eze. But the controversial moment of the match came in the 32nd minute as Thiago Silva was fortunate to escape with just a yellow card after he got caught in possession in his own half and inexplicably handled the ball (perhaps twice) to prevent Jordan Ayew from having a run through on goal.

Patrick Vieira was incensed but Silva survived, and six minutes later, it was Silva’s header down that found Pierre-Emerick Aubameyang who scored his first for Chelsea to draw the game level. After both teams did their best to force an opening in the second half, it was Gallagher who found the winner with that memorable strike late on.

Potter has Gallagher to thank for this victory. This was an evenly matched game, and up to that point where Gallagher found himself on the edge of the Palace box as the match ticked into the 90th minute, it looked destined for a 1-1 draw. Up to that stage, having had a lengthy time between matches, you can see some of the Potter imprint on Chelsea as they look to dominate possession and force openings through incisive balls over the top, or to players running off the final shoulder.

But defensively, Chelsea struggled. You can imagine the attack will take some time to finetune due to both the new manager and personnel taking time to gel, but it’s the defence which needs to be fixed first up. Crystal Palace’s goal was wonderfully crafted — Jordan Ayew’s brilliant cross split Chelsea’s defence and it was sheer determination that saw Edouard able to get his studs on the ball to divert it past Kepa. But the fact he managed to find the space in between Silva and Reece James would have troubled Potter, as would their profligacy in defence as Palace’s pressing saw them surrender possession far too often.

You feel Ben Chilwell is still trying to re-find his best form while there were times where the relationship between defence and midfield broke down. Up front, Raheem Sterling was dangerous off the flanks while Kai Havertz used his physicality well to win key headers and Aubameyang took his chance well, but there were few chances and it required Gallagher’s wonder strike to swing this match in Chelsea’s favour. The win will be a relief for Potter — and they were fortunate to keep Silva on the pitch — but he has work to do ahead of AC Milan on Wednesday.

2. Aubameyang is off the mark

After a hectic summer where in the region of £255m was spent, of the new signings it’s been Sterling who has perhaps found his feet quickest at his new club. He hit form at the end of Thomas Tuchel’s reign, with three in his last four matches in charge of the club and also scored their sole goal in their 1-1 draw with Salzburg FC. We’re still waiting to see the other summer recruits click. Kalidou Koulibaly has found himself on the bench in Potter’s first two matches, while Marc Cucurella was absent through illness on Saturday. Wesley Fofana also looked shaky at times against Palace with that front three causing the Chelsea defence all manner of difficulty. Denis Zakaria is yet to feature.

So out of their prominent first-team signings, that leaves Aubameyang. He played 66 minutes against Salzburg but in his first Premier League appearance for Chelsea, he delivered. Potter was asked Friday whether Aubameyang was looking for “redemption” with this move. The new Chelsea manager said that would be for Aubameyang to ponder on, but he made a promising impression with his movement and clinical finishing. While Havertz and Sterling had more touches, Aubameyang made his key one count as he finished wonderfully past Guaita with a swivelling half volley in the first half having created space by turning Joel Ward. He ended up managing 74 minutes until he was replaced by Armando Broja. Aubameyang left Arsenal under a cloud, and but did okay at Barcelona in that six-month spell as he scored 11 in 18. But Chelsea offers him the chance to reboot his Premier League career.

Though he signed for Tuchel — and the two spoke of their mutual admiration for one another after their spell at Borussia Dortmund — it’ll be Potter who he has to impress and the early signs are looking promising. However, Gallagher will get the headlines. His winning goal will give him a welcome boost after he has struggled this term on his return to Chelsea after last season with Palace. He was poor against Leeds in their 3-0 defeat back in August, and sent off against Leicester in their next match. But this may yet be a seminal day for him. You can see there’s room for Gallagher in this Chelsea team in the middle of the pitch with Jorginho in a poor run of form, and their hectic schedule which after the international break saw them play 13 matches in 44 days. In the familiar surroundings of Selhurst Park, he has hopefully kick-started his Chelsea career.

The incredibly talented Eberechi Eze only started six league matches for Palace last season due to injury, but he’s made a brilliant start to this campaign. He must be a nightmare to play against — he floats around midfield and then makes these darting runs through the middle of the field, or equally finds himself out on the flanks and cuts inside. Chelsea couldn’t manage him at times with their pressing forcing numerous errors.

Eze, 24, slots brilliantly into this Palace side as he plays just behind the forwards and dovetails brilliantly as the conduit between defence and attack. And you can imagine he has few better mentors than Wilfried Zaha and Vieira at the club. But while his performance was a real highlight for Palace, you feel their lack of strength in depth is going to be a problem. They’ve had a brutal start to the season having already faced Liverpool, Man City, Arsenal and now Chelsea. They’ve won just one game in the league this season (although they had two matches postponed in September) and what looked to be a serious injury to Nathaniel Clyne in the first half is the last thing Palace needed with several players sidelined in defence. Palace will come good but they’ll need their full squad to step up over the coming weeks.

Sterling put in another solid performance, but James was Chelsea’s standout player. He kept Zaha largely at bay, and you can see Potter wants him to continue overlapping with Sterling to overload the right flank. But in defence he was essential in keeping Palace out and put in a key late clearance which prevented the hosts from grabbing a goal.

Ask the Palace fans and they’ll say the worst performer on the field was referee Chris Kavanagh, but Jorginho struggled. He squandered possession and it was fitting his final act was misplacing a pass straight off the pitch.

Aubameyang scored his first goal for Chelsea and brought the Blues level with Palace.

Allow me to reintroduce myself 🎶

Aubameyang is back scoring in the #PL!

The chairman of Crystal Palace questioned the refereering and VAR on Thiago Silva’s handball and the subsequent yellow card.

Honestly what is the point of #var we chop and change every week what it does what it thinks. #Var must surely think that’s a red but not a ‘clear’ error! Even if it’s not a #dogso which it is He handballs it twice deliberately, one we play on so two yellows! #cpfc #epl

Chelsea left it until late to clinch the win with a superb strike by Gallagher.

Patrick Vieira on Thiago Silva hand ball: “It’s something I don’t want to talk about — it’s difficult for me to understand it and accept it, so it’s better for me to be quiet and not talk about it. I believe the referee did it wrong, and if I said what I think, I’d be in trouble. There’s a referee, there’s VAR and they’re making decisions, and we just move on.”

Vieira on Gallagher: “He had a good season with us last year and the fans show appreciation for what he did with us last year. It was a good goal, but we shouldn’t have allowed him to take that chance.”

Graham Potter on Gallagher: “I’m delighted for Conor, and delighted for the team the substitutes came on and made an impact. It was a fantastic strike. He has a lot of respect for Crystal Palace, as you could see from his reaction, but he’s a Chelsea player now.”

Potter on the job: “There’s pressure and increased expectation because of Chelsea’s standing in the hierarchy. That’s why I took the challenge and why I’m here. I try to help the players and try to help them improve.”

– Aubameyang: 1st goal in 3 games with Chelsea (all comps). With Barcelona, he did not score until his 4th game (hat trick)

– Conor Gallagher: 1st goal in seven competitive matches with Chelsea in all competitions

Chelsea: The Blues, currently last in their Champions League group, play AC Milan twice in the next two weeks, first at Stamford Bridge Oct. 5 and then in Milan on Oct. 11. These games will be critical for Graham Potter’s side to keep their hopes alive for making it into the knockout stage. Sandwiched between the UCL games, Chelsea host Wolves on Oct. 8, who are off to a struggling start this season.

Crystal Palace: Patrick Vieira’s side are off to a poor start in the Premier League this season, and they’ll hope to pick up points against Leeds United on Oct. 9, before playing Leicester City on Oct. 15 and then Wolves on Oct. 18. Palace have failed to keep the momentum from last season going and will hope to turn things around.