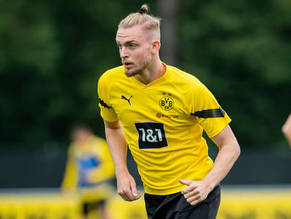 Striker Bradley Fink (19) from Borussia Dortmund’s U23 setup is joining FC Basel in his native Switzerland at his own request with immediate effect. The 20-time Swiss league champions, who are coached by former BVB striker Alex Frei, can still qualify for the UEFA Conference League.

Fink moved to the Ruhr region from Switzerland in 2019 and progressed through the U17s and U19s to the U23s. He completed part of his pre-season with the professional squad. The Swiss junior international scored three goals in 14 games for BVB’s second team, who play in the 3rd division. He was a key player for the U19s last season, scoring on numerous occasions to help them win the U19s Bundesliga West championship, the U19s German championship and advance to the DFB Junior Cup final.

Borussia Dortmund wishes Bradley Fink all the best for the next stage of his career in Basel and will keep a close eye on the striker’s performances for his new employer.

Both parties agreed not to disclose the terms of the contract.