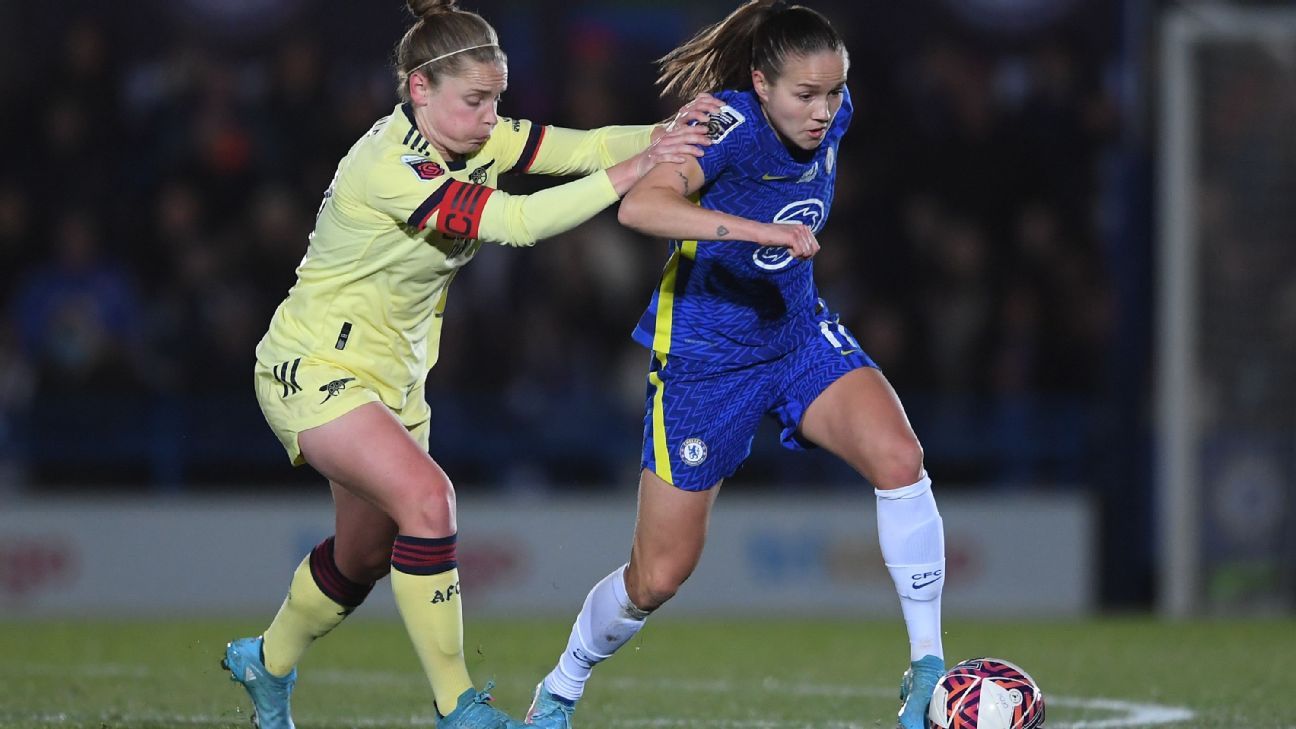 Arsenal and Chelsea played to a 0-0 in a fierce top-of-the-table clash in the Women’s Super League draw at Kingsmeadow Stadium on Friday.

Chelsea, who have closed the gap on a stumbling Arsenal in recent weeks, missed their chance to take the lead in what is becoming one of the closest-fought WSL title races in the league’s 12-year history.

Both sides carved out chances throughout in an action-packed match, but were unable to take full advantage.

Friday’s result means Arsenal remain two points clear of second-place Chelsea at the top of the WSL, although Chelsea have a game in hand. Just seven points separate the top four teams in the WSL, with Manchester United and Tottenham Hotspur in third and fourth place, respectively.

Frank Kirby had the first big chance of the match. Penile Harder cut the ball across the edge of the 18-yard-box, but Kirby fired high and wide.

Arsenal dominated a high-tempo opening period of the match that had all the hallmarks of a hard-fought London derby. The early pressure almost paid off when Jonas Eidvall’s side were denied a penalty on 18 minutes after Caitlin Foord went down under a tackle from Jess Carter.

Striker Vivianne Miedema’s nearly put the visitors in the lead moments later after she was laid off just yards from the Chelsea goal, but she fired against the post.

The match was defined by near misses, and Chelsea added another to the collection on the stroke of half-time when Harder found herself just out of reach from a floated cross into Arsenal’s penalty box. The ball looked to fall to Sam Kerr on the six-yard-box, but opposing defender Steph Catley jumped in the way to make an important block.

Kerr threatened again shortly after the break when the ball fell to her unmarked on the six-yard line with just Arsenal goalkeeper Manuela Zinsberger to beat, but she fell backwards and could not manage a shot on goal.

Both sides continued to push for a winner, and it looked as if one would come on 60 minutes in an end-to-end spell. First, Arsenal put together a superb move in the final third, culminating in Foord collecting the ball on the edge of the 18-yard-box and curling a shot at goal, only to see it blocked by the arm of Chelsea’s Carter.

Emma Hayes’ side were undeterred though as they raced to the other end of the pitch only to see Ji So-yun’s shot fumbled by goalkeeper Zinsberger, although again they could not convert.

Arsenal came close to grabbing all three points in the final five minutes as a free kick from just in front of the left byline led to a goalmouth scramble that was eventually cleared.

Chelsea responded with a last-chance strike of their own after referee Rebecca Welch signalled for eight minutes of stoppage time. Kerr passed to Jesse Fleming. who tapped into an empty net, but the goal was disallowed for offside.