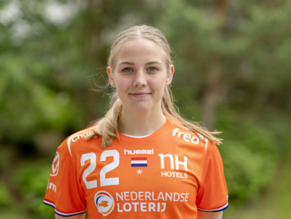 “We have a very ambitious plan in the wide positions,” said Borussia coach André Fuhr, very pleased with the new signings. The Dutch national team player Zoë Sprengers is 22 years old, while Lena Hausherr will only turn 21 in the summer.

“We placed special emphasis on bringing young, talented players to the club who will also help us in the future and can also develop during their time with us,” explained Andreas Heiermann, Board member of Borussia Dortmund’s Handball department. Coach André Fuhr echoed this sentiment: “We need players who are happy to be with us and who have the club in their hearts.

With 32 goals so far this season for the promoted team from Saxony, Lena Hausherr is one of the most reliable players in the Bundesliga. Heiermann is particularly pleased about the return of the ex-Borussia player to the club: “This underlines the value of our youth work. Lena won the German championship with our youth team in 2019. She moved to Zwickau in the summer of 2020 and celebrated promotion to the Bundesliga the following year. Now she’s taking the next stage of her development with us in Dortmund.”

André Fuhr also attested to the 20-year-old’s very good, consistent development. “Lena’s move from BVB to Zwickau in the 2nd Bundesliga was exactly right. She was one of the top performers there, played a very important role in the Saxons’ promotion and has also enjoyed a good season in the Bundesliga so far.”

Zoë Sprengers is also considered a great talent, and at just 22 years of age she has already been part of the Dutch national team squad at the World Cup in Spain. Sprengers won the Dutch championship with VOC Amsterdam from 2017-19, moving to Bayer Leverkusen for the 2020/21 season and is considered a fixture in the side and top performer there. “Zoë can also defend very well on the left side, she is a very flexible player,” said André Fuhr.

Fatos Kücükyildiz, on the other hand, will leave BVB at the end of the season. The back-row player will join Bundesliga rival SU Neckarsulm.