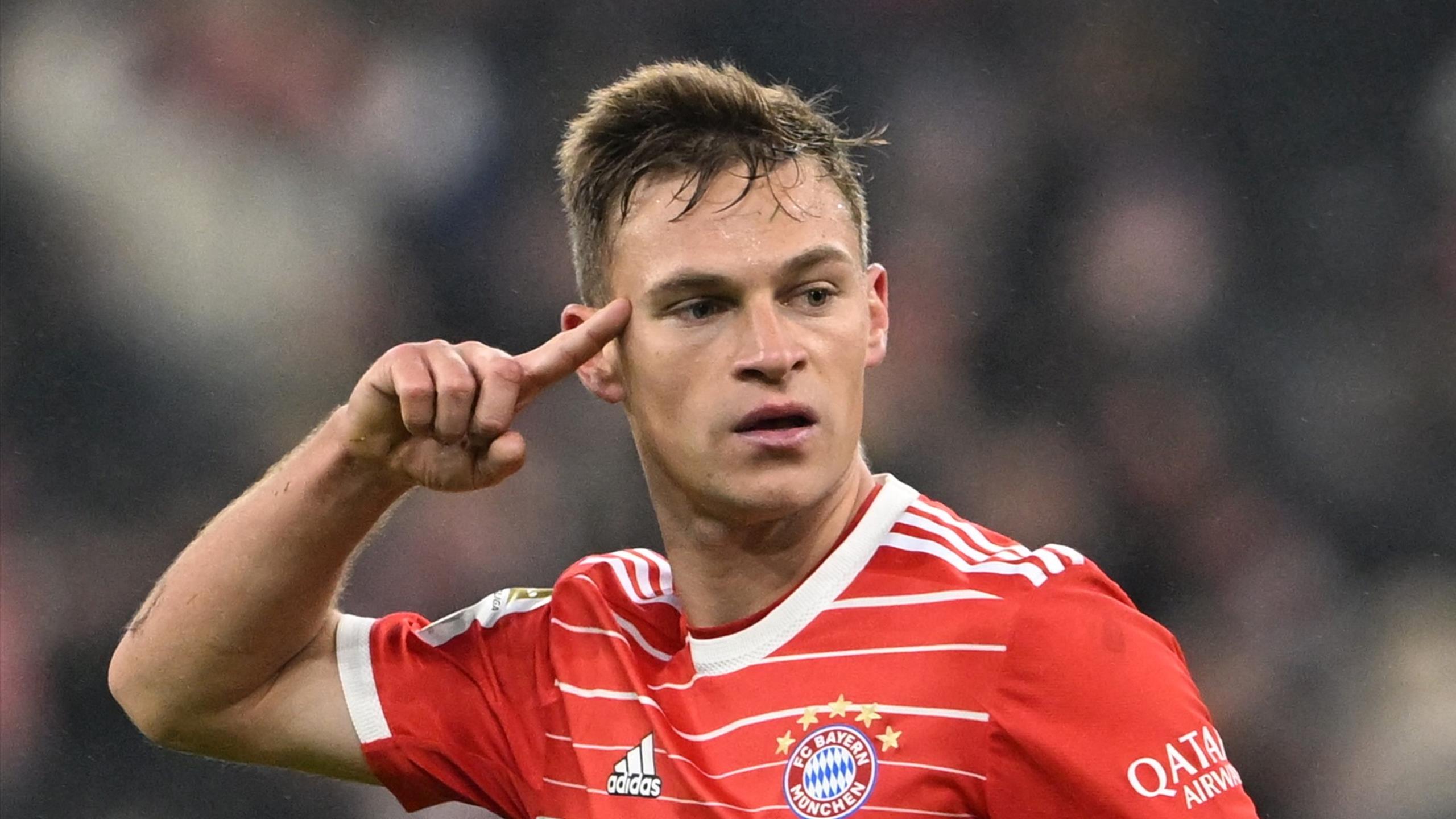 Bayern Munich rescued a late draw against Koln thanks to Joshua Kimmich’s fine strike that saw a tense game finish 1-1.

Ellyes Skhiri’s point-blank finish from a corner early on looked like it would be the winner for Koln, but in the last minute Kimmich struck a thunderous shot into the top corner to rescue a point for the hosts.

The result will give second-placed RB Leipzig hope of mounting a Bundesliga title challenge with the gap between them and Bayern now just four points.

For Koln, the draw sees the Billy Goats sit in 10th on 21 points.

Koln took a shock lead in the fourth minute of the match. Florian Kainz’s cross from a corner was nodded on by Julian Chabot at the near post and stabbed in by Skhiri at the far post.

With Koln defending deep and happy to try and pounce on the counter-attack, Bayern upped the intensity and had two good shots on goal as they looked for an equaliser.

MUNICH, GERMANY – JANUARY 24: Ellyes Skhiri of 1.FC Koln celebrates with teammates after scoring the team’s first goal during the Bundesliga match between FC Bayern München and 1. FC Köln at Allianz Arena on January 24, 2023 in Munich, Germany. (Photo by

In the 14th minute Serge Gnabry had a close range shot parried away by Marvin Schwabe at the near post.

The Koln goalkeeper was called into action again shortly before half-time when he had to make a fine reflex stop to keep out a venomous strike from Benjamin Pavard.

As Bayern looked for a response, Julian Nagelsmann brought on Ryan Gravenberch and Kingsley Coman after the break and they both came close to scoring in the second half.

In the 49th minute, Gravenberch’s driven strike from 25 yards out came off the post five minutes before Schwabe had to get down low to push away a close-range strike from Coman.

Thomas Muller came off the bench for the second match in a row and he came close to scoring in the 78th minute, but his header from a corner was tipped over the bar by Schwabe.

Bayern continued to pressure, and they eventually found their way through in the 90th minute thanks to Kimmich who spared his team a damaging defeat.

Joshua Kimmich (R) of Bayern reacts with Marvin Schwaebe of Cologne during the Bundesliga match between FC Bayern München and 1. FC Köln at Allianz Arena

TALKING POINT – A lacklustre return to Bundesliga action from Bayern

Back-to-back draws for Bayern in the Bundesliga is not a healthy return for the 31-time champions. In a game where Koln were defending very deep, Bayern boss Julian Nagelsmann will be relieved Kimmich could produce a moment of true inspiration.

It is evident that Robert Lewandowski’s presence is missed up front as Bayern were mostly bereft of ideas in the final third outside of speculative efforts from distance.

PLAYER OF THE MATCH – Marvin Schwabe

The Koln goalkeeper had to make six saves in the match, including an eye-catching stop to deny Muller late on, to try and keep Bayern from scoring. There was nothing he could do about Kimmich’s brilliant strike in the last minute.

4′ – GOAL!! SKHIRI PUTS KOLN IN FRONT!!! Olesen wins the visitors a corner. Kainz’s cross into the box is nodded on by Chabot at the near post and Skhiri is there at the far post to stab it in for his third goal of the season! Koln take a shock lead!

14′ – GOOD SAVE BY SCHWABE! Gnabry picks the ball up inside the box… he slips but is able to drive a shot towards the near post and Schwabe is there to parry it away!

48′ – FINGERTIP SAVE FROM SCHWABE! De Ligt fires a vicious shot on goal from outside the box and Schwabe has to tip it over the bar! The following corner amounts to nothing.

49′ – OFF THE POST! Gravenberch drives a shot from 25-yards out and it comes off the left post! Bayern have started this second half very well.

89′ – GOAL!!! KIMMICH EQUALISES!! What a goal from Kimmich! From 30 yards out, he fires an absolute screamer which swerves into the top corner! What a goal! Bayern back in it!

Kimmich regrets not getting vaccinated sooner against Covid-19

Kimmich ruled out until New Year with lung problem after Covid