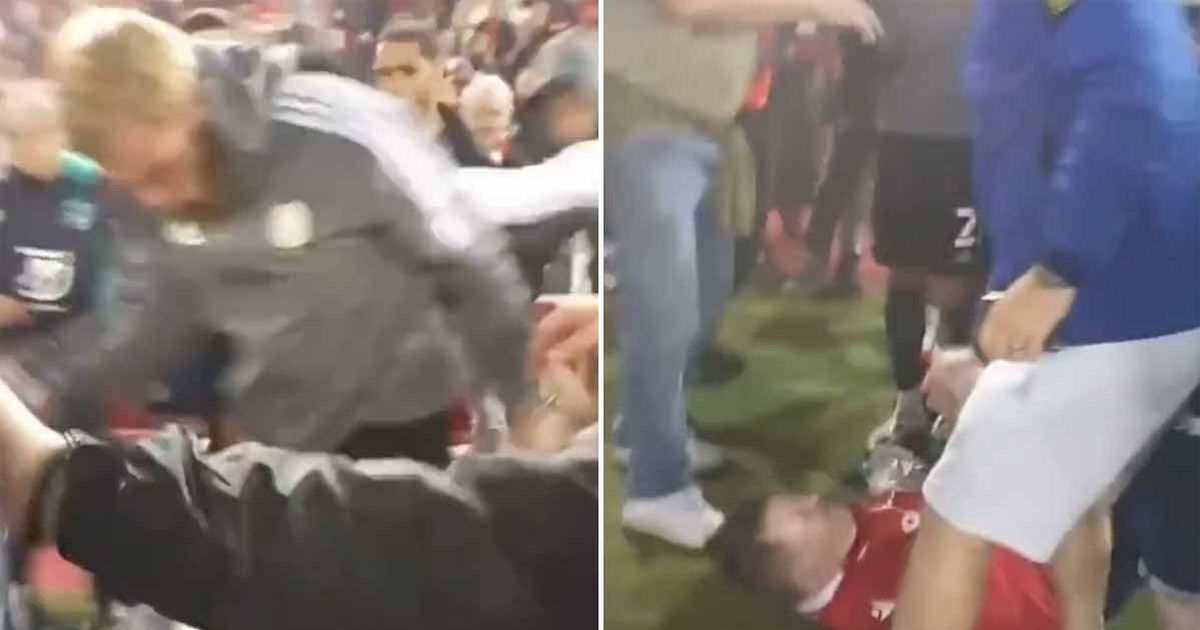 Footage appearing to show Sheffield United forward Oli McBurnie in an altercation with a Nottingham Forest supporter has gone viral on social media.

Tuesday night’s Championship semi-final second leg between the Blades and Nottingham Forest at the City Ground was marred by a pitch invasion after the penalty shootout.

Moments after Forest had booked their place in the Wembley final vs Huddersfield, thousands of jubilant fans made their way from the stands to the pitch. And while for the majority it was a chance to celebrate the heroics of Steve Cooper’s side, there were ugly scenes from a select few.

The most notable incident occurred when United captain Billy Sharp was the victim of an unprovoked attack when stood on the touchline. One supporter, who has since been arrested, ran at full pace towards Sharp, knocking him to the floor with a vicious headbutt.

Sharp insisted he would “not let one scumbag ruin my respect for the Forest fans”, while the club themselves strongly condemned the incident and confirmed they would work with authorities to ensure the individual is held to account and banned for life from attending matches.

Sheffield United manager Paul Heckingbottom was furious in his post-match media commitments, and said: “We’re seeing things thrown on the pitch and things that are thrown on putting players’ health and safety in danger and nothing’s ever done about it.

“There will be something done about that. We’ve seen what’s happened, we know what’s happened. How can you come to a place of work minding your own business and be assaulted in that fashion?

Sheffield United striker Oli McBurnie is seen in the footage

“It’s just bang out of order and it’s everything that’s wrong. Too many times we hear people condemn it, but nothing’s done about it. We’re the ones that suffered.

“We’ve seen one of our players attacked. He’s shook up, bleeding. It’ll be dealt with. It’s upsetting for a lot of reasons – I don’t want to say too much more about it. He’ll be dealt with.”

And in footage of a separate incident – which has been viewed more than 350,000 times on Twitter – McBurnie appears to have kicked out at a fan who looks to have made their way to the visiting dugout. The images show a number of fans and players being held back in a melee, before the individual records claims: “That Sheffield United player just stamped…”

McBurnie missed the end of season play-offs after suffering a foot injury at the end of April, an issue which could keep him sidelined for a number of months. The Scotland international has been wearing a surgical boot to aid his recovery.

Mirror Football approached Sheffield United, who declined to comment at this time.