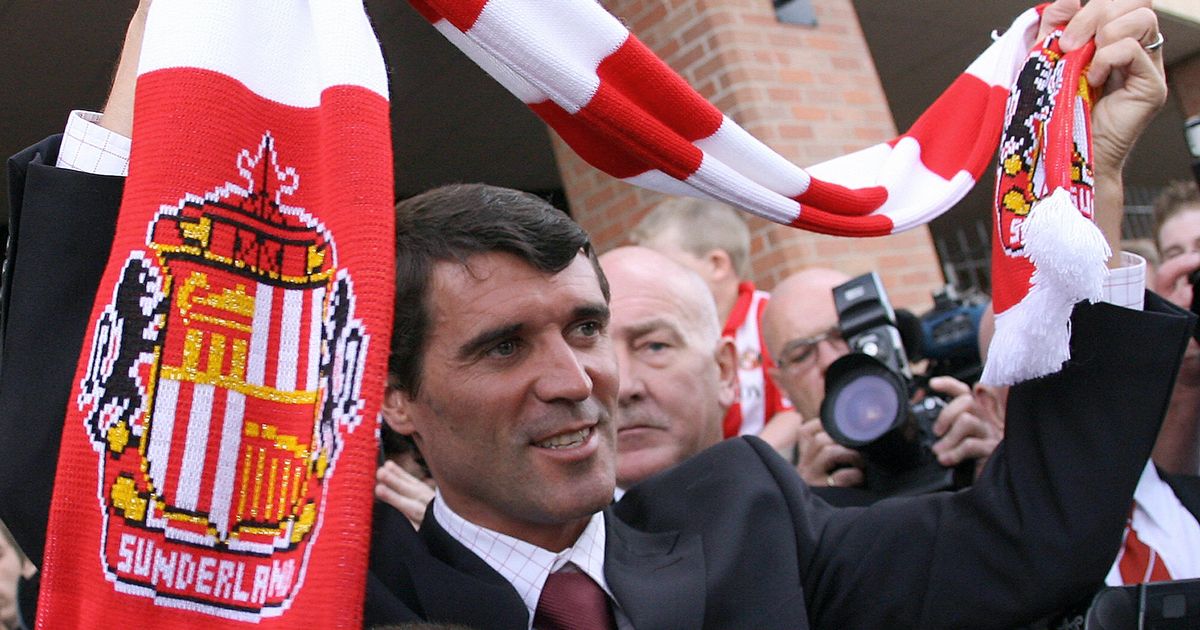 Despite the tales of ranting and raving, Man Utd and Ireland legend Roy Keane is a complex character with lots to offer if he becomes Sunderland boss again

“I’m shocked they found one,” said Roy Keane, when we asked him about his player, Clive Clarke, suffering a heart attack.

“You could never tell the way he plays.” It was a mic drop moment among many during Keane’s box-office 28 months as Sunderland boss.

Brutal, cutting, unforgiving; so near the knuckle, unsayable, it was comic… although probably not for Clarke.

While stories of harsh man-management are the headlines to his tenure, and wince-inducing, they strike a chord with the Mackem faithful, and probably every football fan.

They knew they had a manager who cared, and hurt, with every defeat as much as them.

Have Your Say! Is Roy Keane the right manager for Sunderland? Tell us in the comments section.

There were tales of Keane getting a kit man to put up the tactics board before theatrically kicking it down with venom, as if it was Alf-Inge Haaland.

There was the time he publicly slaughtered his Sunderland dressing room for playing ABBA as pre-match motivational music.

He accused “weak” players of letting their wives “dictate” their lives by choosing London over Sunderland because of the “shopping”. A “sad state of affairs.”

He complained the coastal city of Sunderland was disadvantaged in signing kids for their academy: “We can’t sign fish in the North Sea.”

Keane once donned the goalkeeper gloves, angry that Craig Gordon had been beaten from 30 yards, and bet his players they couldn’t score past him.

Most couldn’t. “I won £800 off them and could have lost 8 grand… I was trying to create a bit of banter… but lost Craig for a while after that.”

Keane could soon be back in the Sunderland dug-out he lit up in 2006-07, winning promotion, before relationships frayed.

First time round he was a lightning bolt, shocking the club out of its losing mentality, challenging standards, demanding blood, guts, and no compromise; leading, even in goal, by example.

If he decides to quit the comfort of the Sky Sports studio as his contract there nears an end, he can do the same again.

There is unfinished business on Wearside; a bond that went unfulfilled and ended prematurely. You could always tell when Keane was on a downer and facing troubles behind the scenes. The beard grew longer.

He’s a risk, he’s box office, he’ll be a galvaniser of the Stadium of Light crowd, where promotion is a must and a fifth season in the third tier unthinkable.

But Keane always has much more about him than the caricature of the stories above.

There is warmth, lots of humour, self-deprecation and the world knows it through his Instagram account which his daughters told him to set up.

With the world of football more softly-softly and educational than 15 years ago, he will have to adapt, take a deep breath and turn the other cheek when tempted to revert to the old methods.

But what it clearly illustrated in his most recent interview, with Gary Neville’s excellent Overlap podcast, is that the desire remains.

There is a manager in there, at the right club, and given the right guidance.

A few years after he left Sunderland, Keane once cycled past me on a hired city bike in a foreign city on punditry duty, gave a cheery (unexpected) wave, and sped down the riverbank, slalom-style, looking so happy.

He’ll never lose the edge, but if he can bring a bit of that light spirit to his inner drive, he’ll be a winner the second time round.

Take A Chance On Me, as Keano definitely wouldn’t sing.