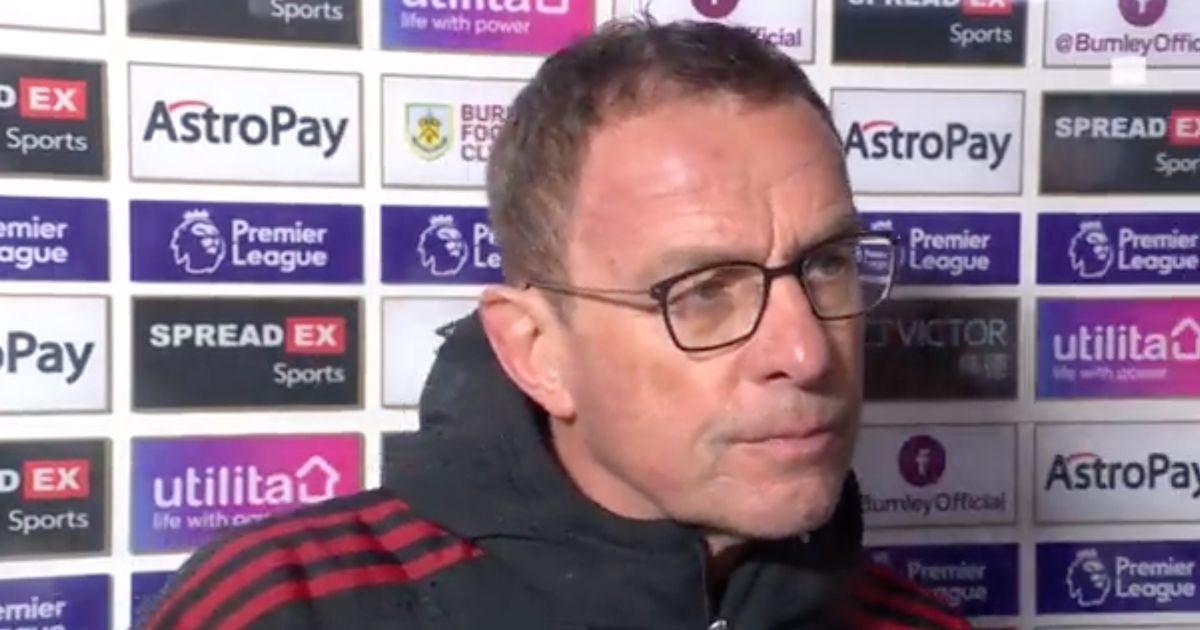 Ralf Rangnick has criticised his Manchester United players for playing “tiki-taka football” as they failed to get a winner against Burnley.

The Red Devils were held to a 1-1 draw at Turf Moor as Jay Rodriguez cancelled out Paul Pogba’s opener.

United arguably should have been out of sight at the break after scoring three goals in the first period, but two were disallowed.

But Rangnick’s men only went in at halftime 1-0 to the good as Rodriguez levelled for Burnley as the hosts came firing out the blocks.

United failed to create any clear-cut chances in the second half as a winner eluded them.

Should Manchester United have been more direct in the second half? Comment below

And Rangnick has hit out at his players for “tiki-taka football” and trying to walk the ball into the back of the net, rather than being more direct.

Speaking to BBC Match of the Day, he said: “We knew they would come out in the second half in a more aggressive way and the only thing I can complain the team about was we were not aggressive enough in the first 20 minutes of the second half.

“[In the second half] We were playing tiki-taka football in our own half and not direct enough. We had the counter-attack but gave the ball away too easily in their box.”

United had two goals ruled out in the first half.

Raphael Varane’s header was disallowed as Harry Maguire was adjudged to be offside, before an own goal for Burnley was chalked off for a foul from Paul Pogba in the build-up.

And Rangnick felt both strikes should have stood.

Asked if United need to find more consistency, Rangnick added: “Yes, but under normal circumstances, we should have been two or three up at half time. It should have been more than 1-0. Today we scored three goals, I cannot blame the team for not scoring.”

Cristiano Ronaldo in action vs Burnley
(

“I think we played a fantastic first half, couldn’t have played any better. We scored three goals, the second that was disallowed I cannot understand. It was a very, very soft decision by the linesman. He flagged the foul five or six seconds after it took pace.

“It really surprised me he flagged when the ball was in the ne. Had he really seen the foul? The first I can understand why it was disallowed, it was a hard one, but the second I cannot understand.

“If you look into the whole game we dominated for most of it. Winning one point is not enough and another frustrating again.”