Ole Gunnar Solskjaer has revealed who he would love to bring in to the current Manchester United squad from the famous treble-winning team.

The Norwegian was part of the team that won the Premier League, Champions League and FA Cup in the memorable 1998/99 season.

Of course, Solskjar is now the manager at United, and it’s fair to say that his current crop isn’t quite at the same calibre of that which led the Red Devils to glory more than 30 years ago.

The likes of David Beckham, Ryan Giggs, Paul Scholes and Jaap Stam, to name a few, would all be leading talents of the current side.

But when asked by Sky Sports who he could bring in one member of the 1999 treble-winning team to his current team, who that man would be and why, Solskjaer was pretty confident in his response.

“They were all unbelievable individuals in a fantastic team,” Solskjaer answered.

“There’s some absolute top players there that you’d have skills and attributes for every single player – you’d want Becks’s crosses, you’d want Giggs’s dribbles, Jaap’s dominance at the back, Ronny Johnsen’s pace, Scholes’s everything.

“You want every one of them, to be fair, but I’ve always said it and I have to say it again, if I choose one player: Roy Keane.”

When asked what he’d add: “Everything he did. He was a leader, the way he played, the way he pushed everyone, I’d say Roy Keane.”

When asked who was more vocal out of Keane and Gary Neville, he joked back: “We listened more to Roy than we did to Gary, that’s for sure!

“Gary was always talking too much, and he still does. That’s just Gary and we’ve got used to it.

“He’s got good opinions, and both of them were very vocal. But if there’s one you wouldn’t go against, it’s Roy Keane.”

With just two days left until AC Milan begin their new season against Udinese, updates have arrived on the fitness of several players. According... 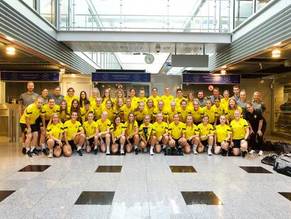 On Wednesday afternoon, the Borussia Dortmund women’s football team made their way to the training camp in the Kitzbühel Alps. By Sunday, the first...