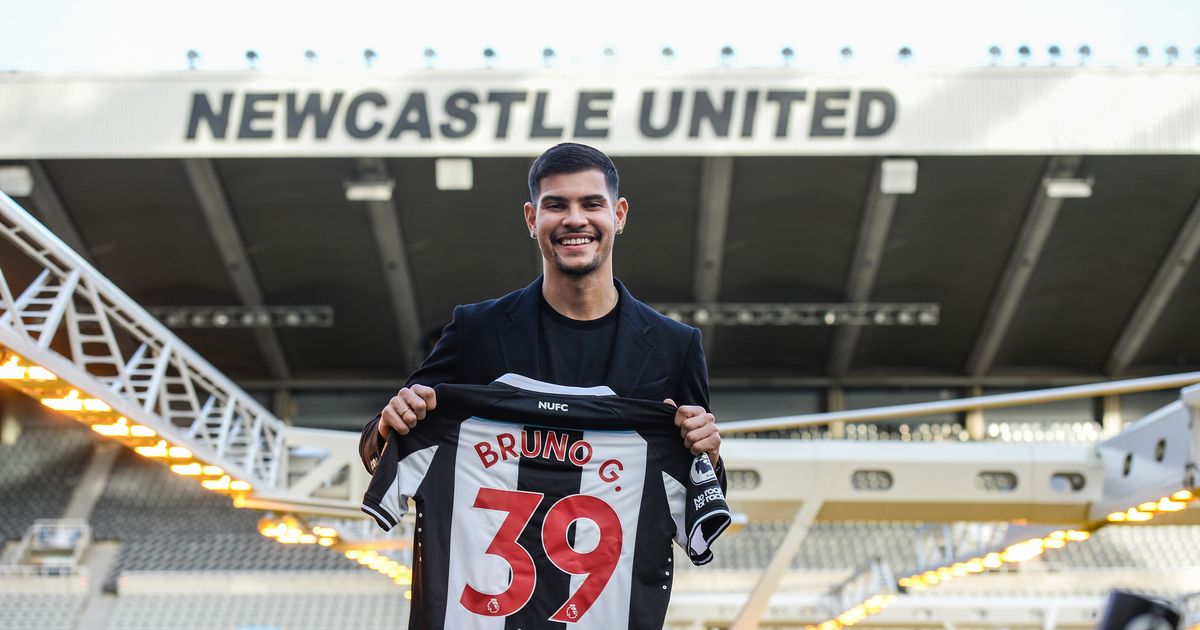 Newcastle United’s £40million January transfer signing Bruno Guimaraes chose the No.39 shirt as a symbol to honour his family, family, and journey in football

Bruno Guimaraes pointed to the 39 on his black and white Newcastle shirt and revealed it is a symbol honouring his family and long journey to Tyneside.

“That is the number that has sustained my family when I was growing up,” the 24-year-old said on Monday.

It’s an integral part of the story which has seen Guimaraes rise from a teenager leaving home at 15 to learn his trade at Audax in Sao Paulo, to becoming one of Newcastle’s most expensive signings.

“When I signed for my first professional club Athletico Paranaense he asked me to take his number for my shirt.

“It is also a lucky number in my family.

Have Your Say! Will Bruno Guimaraes become a Newcastle legend? Tell us here.

“We won four league titles at Paranaense and it has proved to be a lucky number for me on the pitch. I will take it everywhere with me.”

He’s battled his way to the top the hard way, and says he is ready for the Premier League.

“I left home really early when I was just 15. I went to live in another state. I was alone in digs. I only saw my parents twice a month and I am an only child.

“It was really different for me, and really difficult for them. It was a difficult time and I really missed them. I missed home. But I would do it all again to get here now.”

Dad Dick and mum Marcia are with him on Tyneside, with fans likely to get their first glimpse of his deft close control, surging runs and passing range against Everton on Tuesday night.

He added: “My family are everything. I carry them with me everywhere, I have my mum and dad’s names tattooed on me.”

He was sold on the move to St James’ Park by the Saudi vision for constructing a mega-money new team that will qualify for the Champions League some day soon.

And he was not shy of trumpeting that ambition yesterday, or name-dropping the players he worships.

“In terms of Brazilian players that I have always been a huge fan of, it’s Ronaldinho, but we’re very different players!”

He is also ready for the scrap of a relegation fight to allow Newcastle scope to sign more huge names in the summer, rather than reshape for the Championship.

He added: “I spoke to Thiago Silva, Gabriel Jesus, Alex Telles as well.

“They told me how difficult it is to play away at Newcastle given how passionate the fans are, that it’s one of the most difficult away fixtures in the league, so I didn’t have to think twice about coming here.

Bruno Guimaraes is ready to impress at Newcastle

“As I said before, I’m really happy to be here and really looking forward to experiencing the atmosphere of the Premier League and Newcastle.”

There was also a name check for Claudio Capapa, the Brazilian defender who also moved from Lyon to Tyneside in 2007 when Sam Allardyce was manager.

He added: “I’d also like to mention Claudio Cacapa, a coach at Lyon. I spoke to him a lot about coming here. He’s someone who helped me in my decision, so warmest regards to Claudio as well.

“I’d like to send my best regards to Mirandinha too.”

That was a reference to the first ever Brazilian to play English football when he signed for Newcastle in 1987 for £575,000. The trailblazing striker, now 62, played 54 games and scored 19 goals.