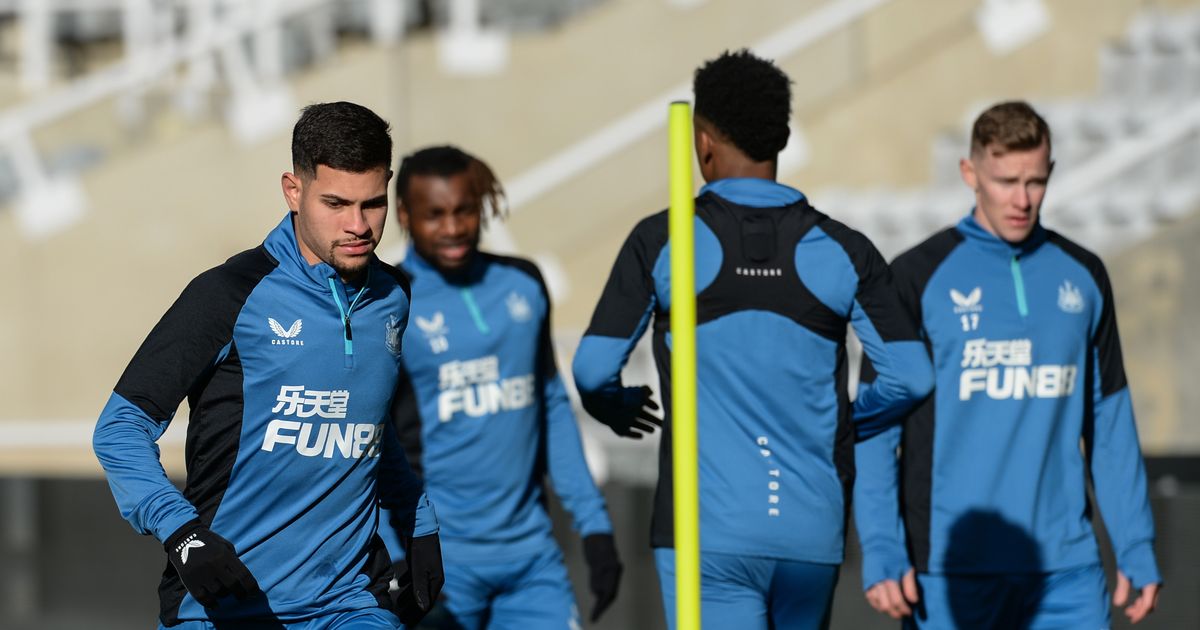 Callum Wilson has been ruled out for the majority of the season, meaning Newcastle’s January signings – especially Bruno Guimaraes – need to shine immediately

Eddie Howe has admitted Newcastle need new boy Bruno Guimaraes – and all his January signings – to hit the ground running after a major Callum Wilson setback.

The United coach held a practice match at St James’ Park at the weekend to knock off the rust from his squad and integrate the Brazilian international plus deadline-day signings Matt Targett and Dan Burn.

Burn is now a doubt for Tuesday’s clash with Everton with an infected toenail.

But Howe has told Guimaraes he will have to adapt quickly to the “fastest league in the world” after joining from Lyon for £40m last month.

Newcastle have not played since beating Leeds on January 22, but Howe says his squad are bonded better after the winter break and the trip to Jeddah in Saudi Arabia.

Have Your Say! Will Bruno Guimaraes keep Newcastle up? Tell us your prediction here.

NEWCASTLE UPON TYNE, ENGLAND – FEBRUARY 04: Bruno Guimaraes poses for photographs as he arrives at St.James’ Park on February 04, 2022 in Newcastle upon Tyne, England. (Photo by Serena Taylor/Newcastle United via Getty Images)
(

Howe is now heavily reliant on £25m capture from Burnley, Chris Wood, after revealing Wilson is out until the last few games of the season – probably April – after being on crutches recently.

Wood has yet to score after two appearances. Newcastle lack goals and will need the “midfield control and creativity” that Howe says Guimaraes can offer.

Howe said: “We did what we needed to do and now we’ve got to do the hard bit, which is getting points on the pitch.

“This is the quickest league in the world and Bruno will have to get up to speed quickly, and deal with that.

“I do feel we have a good squad but you cannot make any predictions and you can’t make any pledges or promises to what will happen. I have been in football too long to do that.

“I would like to think we are stronger than we were and I think the spirit and harmony in the group is very good and I’d like to think the players are absolutely motivated to fight tooth and nail in every minute of every game to try and get ourselves out of the relegation zone.

“That is what I can pledge in terms of what we will give to it but beyond that, it is in the lap of the football gods.”

So, how will Newcastle line up without Wilson to call on in the coming months?

Remains No1 and is a noisy and important presence at the back. Newcastle did look at signing Dean Henderson from Manchester United, because of an injury to Dubravka which has proved not to be serious. He has vital saves to make and will have to bond with three new defenders.

One of the best signings of the window for £12m from Atletico Madrid. He has been solid and Newcastle will need his delivery from set-pieces and out wide to score more goals. Likely to be appointed captain if Jamaal Lascelles is rested.

NEWCASTLE UPON TYNE, ENGLAND – JANUARY 05: In this image released on January 7, Kieran Trippier poses for photographs with a scarf at the Newcastle United Training Centre on January 05, 2022 in Newcastle upon Tyne, England. (Photo by Serena Taylor/Newcastle United via Getty Images)

Recently recalled by Howe because of his international experience and passing ability. He isn’t the quickest but can read a game and spring attacks. He is under pressure from the arrival of Dan Burn, but his distribution alongside Burn could mean he gets the nod over Lascelles – but it’s a very close call, and perhaps Howe’s biggest dilemma if United are four at the back.

A surprise £13m signing after Newcastle missed out on top targets Sven Botman and Diego Carlos. But they need his height, defensive power and ball-playing ability. Can he forge a partnership with Schar, or Lascelles? We may have to wait and see if he misses the Everton game due to an infected toenail.

Goes straight in after signing on loan from Aston Villa, after losing his place to Lucas Digne… who himself turned down Newcastle. A specialist left-back is welcome, with Paul Dummett injury-prone and Matt Ritchie out of position.

Has been decent recently, with his raking passes and winner at Leeds. Definitely still a mainstay in Howe’s side for the control he can exert on a game.

NEWCASTLE UPON TYNE, ENGLAND – FEBRUARY 04: Bruno Guimaraes poses for photographs as he arrives at St.James’ Park on February 04, 2022 in Newcastle upon Tyne, England. (Photo by Serena Taylor/Newcastle United via Getty Images)
(

The stellar signing for the window in the Premier League. Lyon playmaker, Brazil World Cup starter, driving force from deep and a man Newcastle can build around. Will arrive on Tyneside at the weekend after international duty and have little time to integrate, but Howe must put him straight into battle.

Has had a quiet season after that £25m summer move, but looks to be regaining full fitness and form. Newcastle need his box-to-box legs and rekindling of his goal touch. Worth persevering with to get him up to potential.

A nailed on starter, but needs to chip in with even more goals and get to double figures quickly. His tricks can turn games, and one day he will be awarded a penalty when he’s fouled.

Puts in a good shift and is just about deserving of a place in the starting XI, but has to start creating goals. Knows Howe’s methods, but would have been ousted had they signed another forwards in the window like Jesse Lingard.

Over-priced at £25m and his signing tipped off selling clubs that Newcastle had more cash than everyone expected in January. Has had a quiet start, no goals so far, but will prove an asset with Callum Wilson still injured.