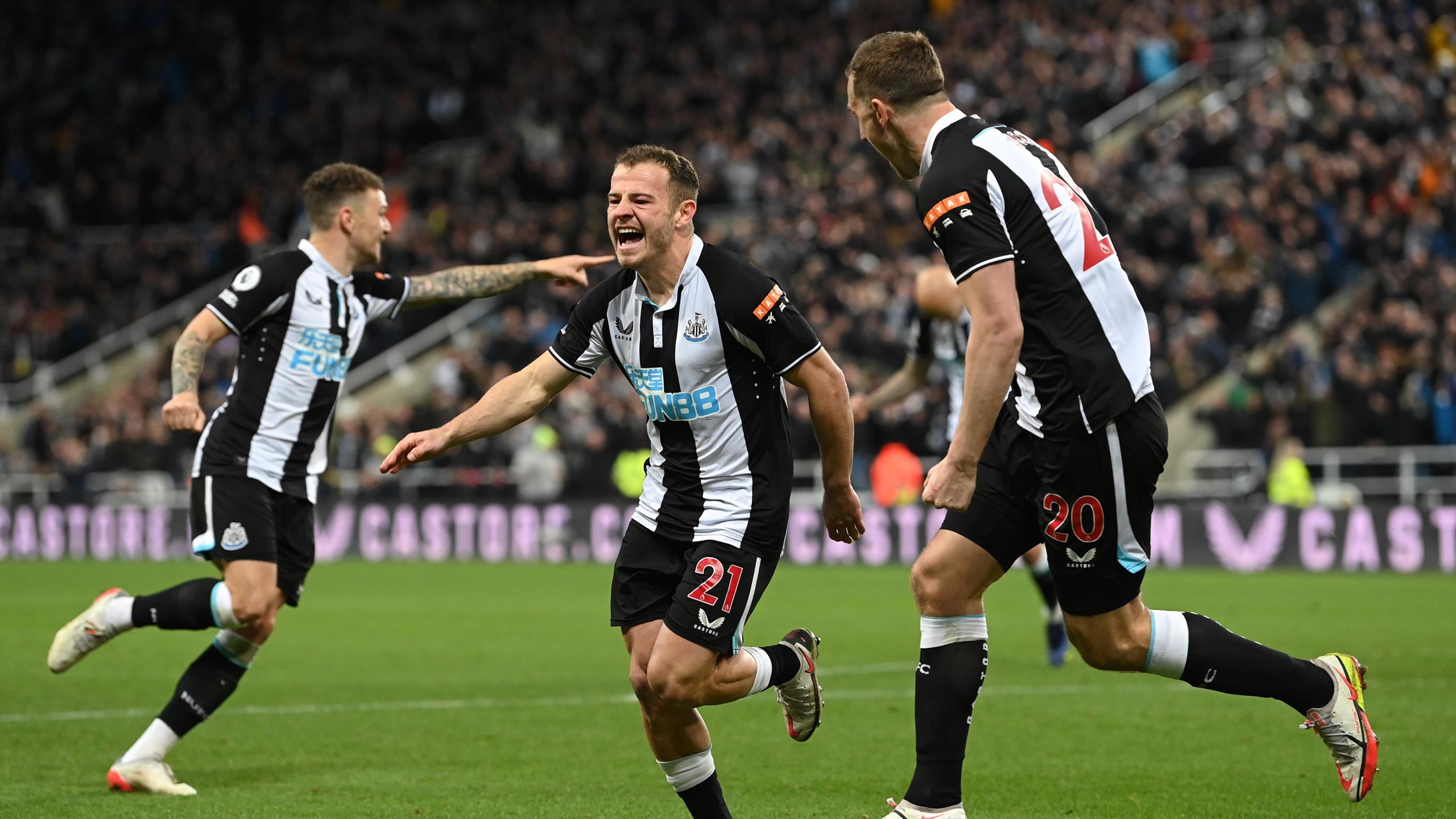 Newcastle United moved out of the relegation zone courtesy of a 3-1 victory over Everton as Frank Lampard’s first Premier League match in charge of the Toffees ended in a worrying defeat.

The visitors had taken the lead on 36 minutes when the unfortunate Jamaal Lascelles diverted into his own net after Mason Holgate’s shot was cleared off the line.

The same two players were involved again under two minutes later when Lascelles’ thumping header came back off the bar and flew into the net via Holgate.

Guimaraes: Stay up this season, then Newcastle aim to win Champions League

It was a crazy spell in a lively first period with Newcastle carving out a series of openings that Chris Wood and Joelinton failed to make the most of.

Everton handed debuts to both Dele Alli and Donny van de Beek from the bench, but it was the home team who were dominant throughout the second half.

Ryan Fraser gave them a deserved advantage when he converted Allan Saint-Maximin’s cross on 56 minutes before Kieran Trippier’s free-kick sealed the points for Eddie Howe’s men.

The result sees the Magpies move up to 17th spot, just a point behind Everton in 16th.

The Blues will now turn their attention to a home clash with Leeds on Saturday while Newcastle host Aston Villa on Sunday.

There’s no doubt there’s a growing feel-good factor about Newcastle right now. What looks like some sound business in the transfer window has galvanised the squad, as well as the supporters who were in fine voice throughout this impressive victory.

Not only are Howe’s side out of the bottom three, they are four league games unbeaten and have now won back-to-back Premier League matches for the first time since May. The Newcastle boss even had the luxury of giving big-money signing Bruno Guimaraes a stress-free stoppage-time bow with the hard work already done.

In contrast, alarm bells continue to ring for Everton. The FA Cup success over Brentford already seems a long time ago as they were second best for long spells against a rival near the bottom of the table.

The Blues have won just once in 15 league matches and are only three points off the relegation zone. Lampard will need to work fast to fix some glaring holes in the defence and, after this, he will have no doubts about the size of the task in hand.

At times he was unplayable. The forward was in irresistible form throughout and gave the Everton rearguard a torrid night. He created a goal for Fraser and was unlucky not to get on the scoresheet himself.

32’ – NEWCASTLE CHANCE! The hosts cut through Everton’s defence as Saint-Maximin dances beyond a couple of challenges and tees up Joelinton, but his shot from a narrowing angle on the left is repelled by the Blues keeper.

36’ – GOAL! – Newcastle 0-1 Everton. It’s rather unfortunate as Lascelles can only turn a blocked shot from Holgate into his own net after the hosts failed to deal with a set piece.

37’ – GOAL! – Newcastle 1-1 Everton. Lascelles responds to that misfortune in style as he thumps a header against the bar before seeing it hit Holgate and fly into the net.

42’ – NEWCASTLE CHANCE! The hosts keep a half-cleared corner alive. It’s helped back into the area towards an unmarked Wood, but he somehow contrives to plant a tame header straight into the arms of Pickford.

45+3’ – NEWCASTLE CHANCE! Wonderful play from Saint-Maximin on the right side of the area. He twists and turns and cuts it back for Joelinton, who somehow fails to sort out his feet and find a shot. Everton desperately throw bodies in the way of a series of follow-up attempts and just about survive.

56’ – GOAL! – Newcastle 2-1 Everton. Fraser manages to guide an awkward shot into the net after a fine run and cross from Saint-Maximin on the left.

80’ – GOAL! – Newcastle 3-1 Everton. Trippier whips a 25-yard free kick beyond the wall and into the corner of Pickford’s net.