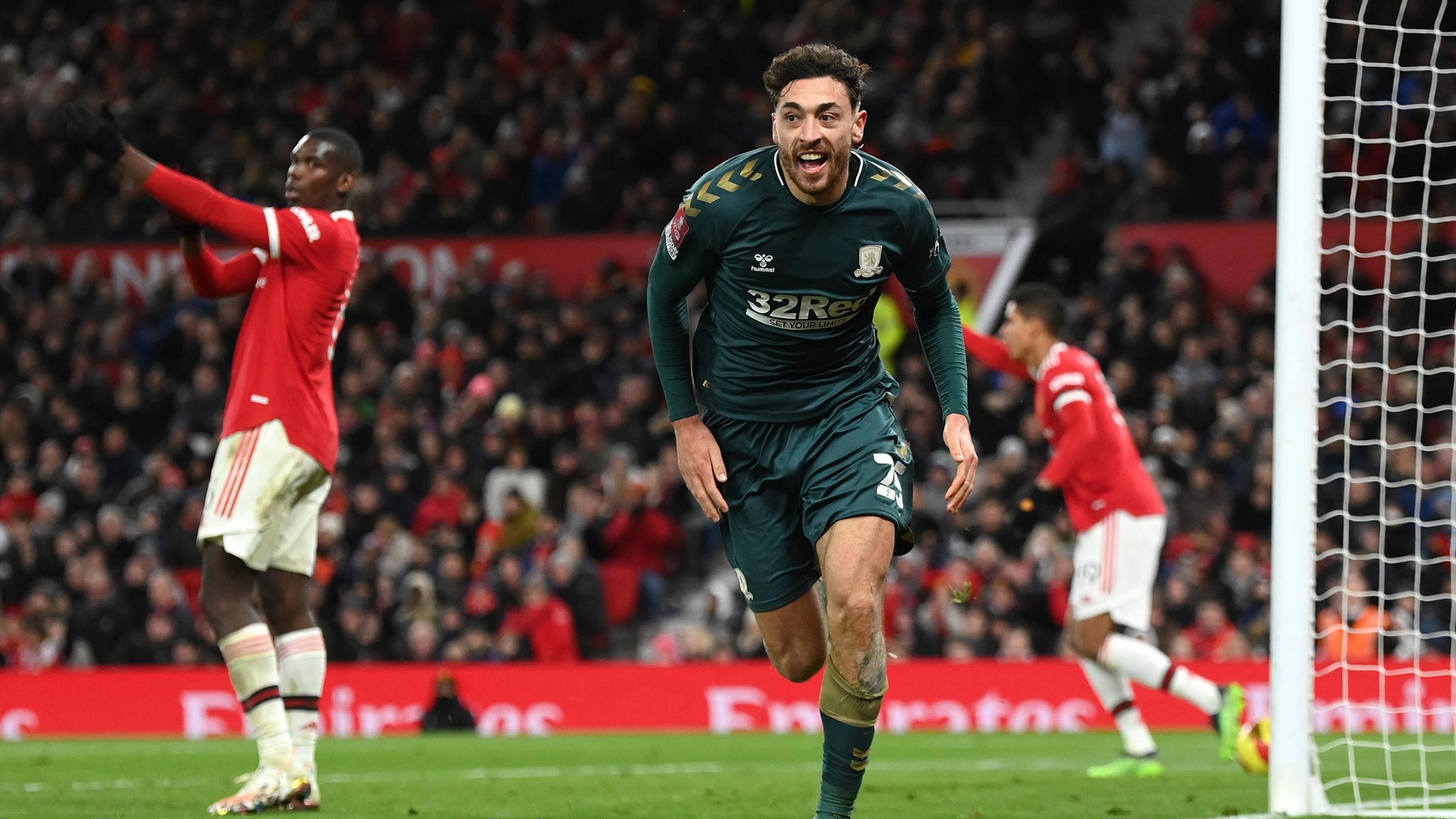 Middlesbrough sent Manchester United crashing out of the FA Cup with a penalty shootout win at Old Trafford.

United should have been out of sight in the first half, but squandered a host of chances and their profligacy proved costly as the Teessiders advanced to the fifth round.

Jadon Sancho gave United the lead after Cristiano Ronaldo had missed a penalty.

Rice: I see myself staying close to London

Matt Crooks levelled in controversial circumstances to force an additional 30 minutes and penalties.

United made a rapid start and squandered a string of chances.

A day short of his 37th birthday, Ronaldo had a chance to net his first FA Cup goal since 2009, but he dragged his effort wide after Paul Pogba had won a spot kick when getting in behind the Middlesbrough defence.

United were dominant before Ronaldo’s miss, with Sancho hitting the bar inside two minutes.

It was Sancho who made the breakthrough on 25 minutes, as he latched onto a glorious pass from Bruno Fernandes and beat Joe Lumley with the aid of a slight deflection.

Jadon Sancho of Manchester United is congratulated by Bruno Fernandes and Luke Shaw after scoring the first goal during the Emirates FA Cup Fourth Round match between Manchester United and Middlesbrough at Old Trafford on February 04, 2022 in Manchester,

United had further chances at the start of the second half, as Marcus Rashford and Ronaldo missed the target, and they were pegged back in controversial circumstances.

Substitute Duncan Watmore collected a pass, but the ball hit his hand before he lifted the ball over Dean Henderson and for Crooks to turn the ball home.

Boro had an obvious advantage from the ball striking Watmore’s hand, but a change in the law denied VAR the opportunity to intervene after referee Anthony Taylor had allowed the goal to stand. And by the letter of the law, Taylor was correct.

Bruno passed up a chance to put United in front with 20 minutes remaining when striking a post with the goal gaping after Boro had presented him with the ball on the edge of the box.

Extra-time produced few chances as United looked leggy and Boro were happy to play for penalties.

The shootout was a clinic in penalty taking as takers confidently had the beating of Dean Henderson and Lumley. That was the case until Elanga stepped up and scooped his effort high into the Stretford End, as Boro repeated their shootout success at Old Trafford from the Carabao Cup in 2015.

Talking Point – Enjoy Pogba while you can

The Frenchman was back in the team for the first time since picking up a serious injury in early November. There was no thought from manager Ralf Rangnick of easing him in with a 20-minute cameo. In from the start for the FA Cup fourth round. There were no signs of rust, as he oozed class. His first pass out to Luke Shaw had all the grace we associate him with. He won the penalty which Ronaldo fluffed, and was hugely impressive until tiring and being replaced with 10 minutes remaining in normal time.

His contract is winding down and there’s no indication that he will extend, so these are likely to be his final few months in United colours. Rangnick must use him at every opportunity, and United fans should relish that as they will miss him when he’s gone.

Man of the Match – Paddy McNair

This will have been a sweet one for the former United man. When he saw a team-sheet including Ronaldo, Sancho, Rashford and Bruno, he could have been forgiven for feeling a bit queasy. United threatened to overwhelm Boro, but the visitors grew into the game and McNair gained in stature. He marshalled the defence superbly and kept the stars fairly quiet in the second half and in extra-time.

2′ – Crossbar – Almost a calamity for Boro as Lumley comes to the edge of his box but hesitates and drops the ball. It falls to Sancho who chips the ‘keeper but it hits the bar and Boro smuggle the ball away.

19′ – Penalty United – Pogba gets in behind Dijksteel and the Boro defender in desperation tries to make the tackle, but bundles the United man over and Anthony Taylor points to the spot.

20′ – Ronaldo misses – On the eve of his 37th birthday, Ronaldo drags his low effort wide of the right post. Inches from perfection, but it turns out horribly for their star man.

25′ – Goal United! – Sancho puts United ahead. The pressure finally tells as Bruno collects the ball on the halfway line and picks out Sancho’s run superbly. He gathers himself, shoots and a small deflection takes it beyond Lumley. On the balance of play, there can be no complaints from Boro.

64′ – Goal for Boro! – Boro spring forward and the ball finds Watmore who collects it but his touch is not great and it hits his hand. Watmore flicks the ball over Henderson and Crooks puts the ball in. It was handball, but a law change meant Anthony Taylor was right to let it stand. Controversial.

72′ – Woodwork – Boro give the ball away sloppily on the edge of their own area and it’s a huge chance for Bruno, but he fails to take advantage as his shot hits the right post.

120′ – Man Utd 7*-8 Middlesbrough – Elanga steps up and sends his penalty high over the bar. Wild scenes as Boro advance.

‘My headspace is clear’ – Jesse Lingard

Lingard given time off after transfer disappointment, will miss Boro tie