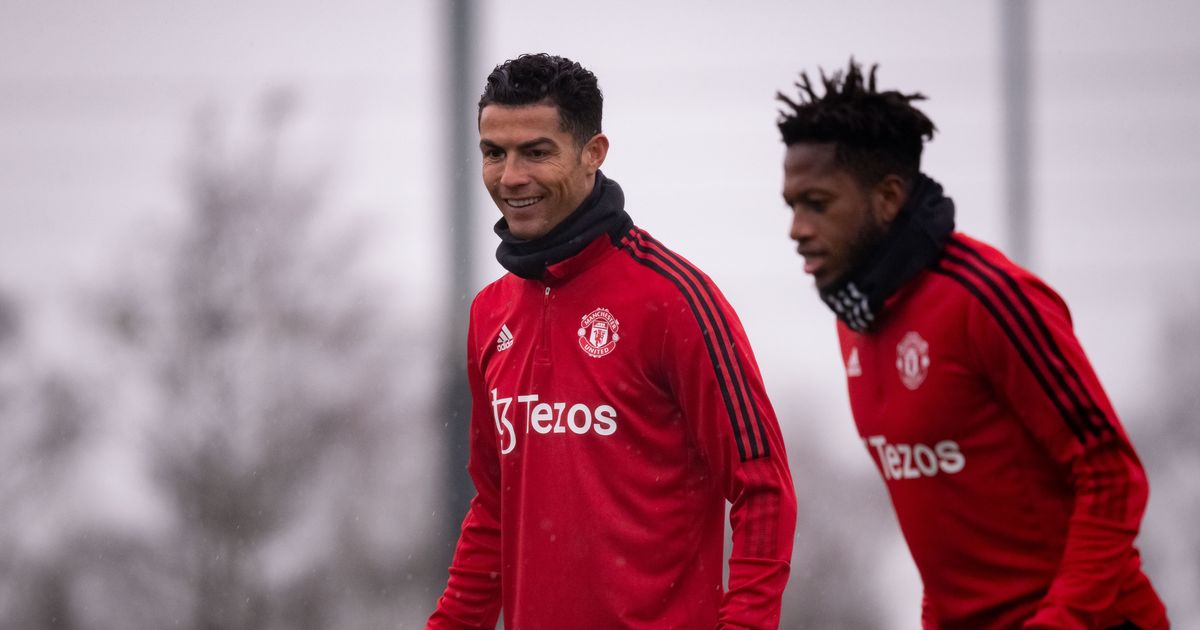 Manchester United ‘s stars were in good spirits in training on Monday as they looked to put the bitter taste of recent failures behind them.

The Red Devils were held to another 1-1 draw in the Premier League on Saturday as Southampton hit back to earn a point at Old Trafford.

The result followed a stalemate at Burnley via the same scoreline and a disappointing FA Cup exit at the hands of Middlesbrough.

Ralf Rangnick knows more dropped points could be hugely damaging for his side’s chances of Champions League qualification given the competitive nature of this season’s top-four race.

With that in mind, United players were out to convince the interim manager they deserve a spot in the starting XI for Tuesday night’s must-win clash with Brighton, while there was also a welcome boost in the form of a returning midfielder.

Fred back in the fold

Fred has recovered after testing positive for coronavirus
(

Fred is in contention to feature in the matchday squad against Brighton after missing the last two fixtures with coronavirus.

The midfielder was in a fine vein of form prior to testing positive, contributing two assists in his last three Premier League performances.

That being said, he was a divisive figure among the fanbase earlier in the season and has struggled to find the consistency expected of him, so he will need to improve in this department to re-establish himself in the first-choice midfield pairing for the run-in.

What is your scoreline prediction for Manchester United versus Brighton? Have your say in the comments!

Scott McTominay has been a mainstay in midfield this season
(

Fred’s own struggles are symptomatic of Manchester United’s broader midfield issues, with Rangnick yet to settle on a partnership in the centre of the park.

Paul Pogba and Scott McTominay have lined up for the last two fixtures to mixed effect, while Nemanja Matic remains sidelined with a shin injury.

McTominay has featured the most of any of United’s midfielders across the campaign, making 21 Premier League appearances, so it seems likely he will keep his place alongside one of Pogba or Fred.

The former would be the more attacking choice to unlock a stubborn Brighton outfit while the latter offers more protection for the back four, so the teamsheet will be a good indication of how Rangnick intends to approach the match.

There are also selection decisions to be made in an attack which has underwhelmed in recent weeks.

Jesse Lingard has played just 30 minutes of Premier League football since the start of December, but presents Rangnick with another option alongside the likes of Jadon Sancho, Marcus Rashford and Bruno Fernandes for a role out wide or in attacking midfield.

With United scoring just three goals in their last three games, Rangnick may decide the time is right for drastic action so his side can rediscover their fluency, especially as Brighton have the fifth-best defensive record in the league.

Ronaldo all smiles despite drought

Cristiano Ronaldo is enduring one of the toughest spells of his decorated career – a run of six club games without a goal is his longest drought since 2009.

Meanwhile, he has been accused of setting a bad example to the club’s youngsters and his body language has also been criticised.

But that did not stop him training with a smile on his face on Monday, and he remains United’s top scorer for the season with a creditable 14 goals in 26 games.

The veteran striker will have even more appetite than usual to get back on the scoresheet against Brighton, which is surely concerning news for Graham Potter’s men.

Pick up tomorrow’s Daily Mirror and get a FREE £2 Shop Bet with William Hill which can be used on any of the sport action! 18+ Terms apply. See tomorrow’s paper for your voucher.

Maguire looks to bounce back

Ronaldo is not the only United player in need of a confidence-boosting performance, as Harry Maguire continues to find himself in the spotlight.

The United captain’s performances at centre-back and his leadership of the team have been called into question throughout a disappointing season.

But, like Ronaldo, he had a brave face on throughout training and he knows the best way to silence his critics is with a clean sheet against the Seagulls.

There could be good news in that respect as, outside of the relegation zone, only Wolves have scored fewer goals than Brighton in the top flight this season.