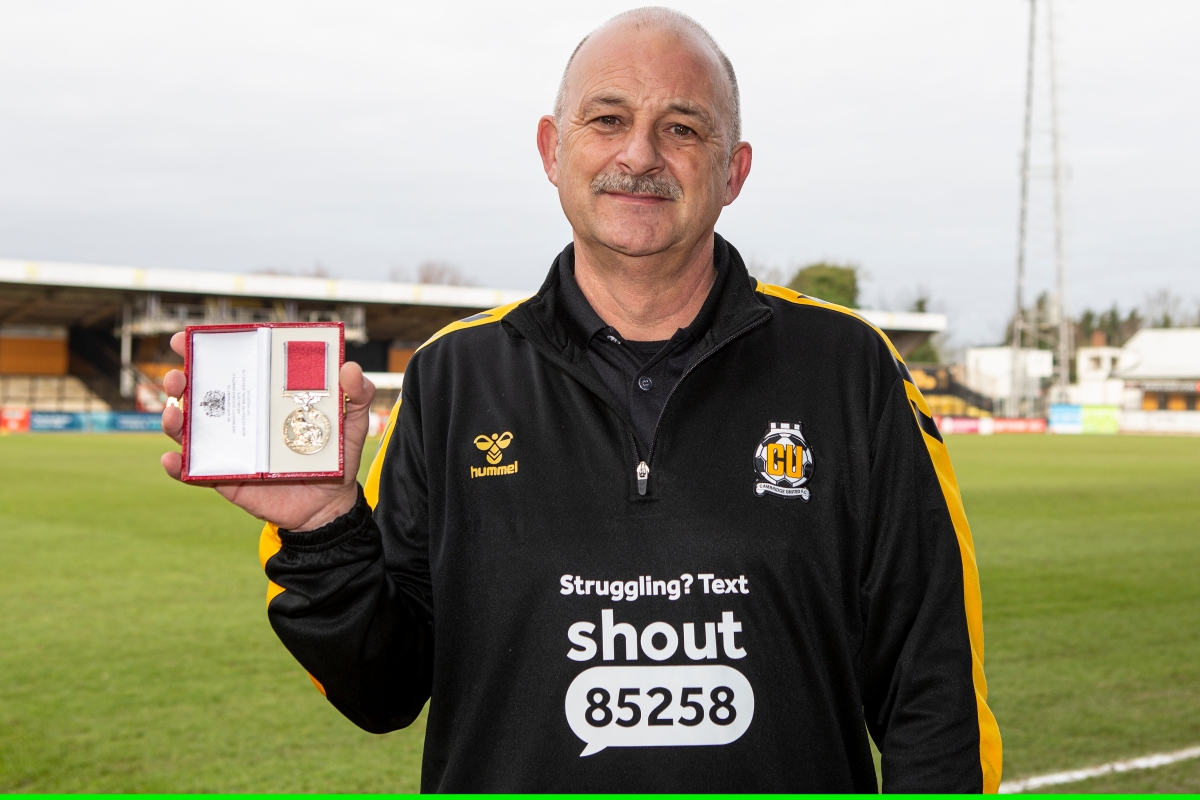 But that’s far from the biggest accolade that the Abbey Stadium groundsman has received in his 43 seasons at the club.

In 2020, Darker was awarded the British Empire Medal for his long service to the U’s and for his charity work.

Beating the weather four years ago so that Cambridge’s League Two clash with Luton could go ahead was just another day at the office.

Darler said: “It was the Beast from the East.

“I was here just before 4am. We put one floodlight on and using a rubber snow plough I’d made myself over the years, we cleared 200 tonnes of snow off the pitch before 7am.

“But that was just the start of it because we had to get the stands clear and all the areas around, put salt down.

“To hear the announcement, ‘Man of the match: Cambridge United groundsman Ian Darler and his staff’, was amazing.”

But being told he had been honoured by the Queen was too much for Darler.

He said: “When I got the phone call, I thought it was a wind-up.

“I did tell the chap, ‘Who the hell do you think you’re kidding?’ Because you just don’t expect it.”

No-one at the club or the wider community would argue that Darler didn’t deserve the gong.

He was the youngest groundsman in the Football League when he took over at the Abbey Stadium in 1979 at the age of 19.

Darler received his first transfer offer at his very first home game because the visiting Leicester board were so impressed with his pitch.

And in 1987, Coventry joint boss John Sillett pronounced the Abbey turf better than the Wembley surface where his side had won the FA Cup months earlier.

But Darler turned down a move to top-flight HIghfield Road and a number of others down the years.

He said: “Cambridge gave me the opportunity and I thought I should remain loyal.

“And, forgive the pun, I don’t always believe the grass is greener on the other side.”

The main reason why the grass at the Abbey has (mostly) stayed green is Darler’s devotion.

The multi-award-winning groundsman estimates that he has blagged materials and equipment worth a million pounds from suppliers during his tenure, as well as putting in about £30,000 of his own money.

Legendary U’s boss John Beck did effectively force Darler to down tools at one point, telling him the pitch was too good for his team’s style of play.

But Darler was soon back after complaints about the surface. He has a different take on claims in former Cambridge striker Steve Claridge’s autobiography that he let the grass grow longer in the corners, under orders from Beck, to hold up long balls into the channels.

Darler said: “The pitch had been destroyed from them training on it and we were left with a diamond shape that was permanently waterlogged.

“The only way they could play was with an inch of sand on it.

“The only part of the pitch that HAD any grass was the corners!”

Like all Cambridge fans, Darler enjoyed the club’s amazing win in the last round at Premier League Newcastle when their Geordie striker Joe Ironside grabbed the only goal.

It reminded him of one of his favourite Abbey Stadium moments. In April 1984, a Newcastle team featuring Kevin Keegan, Peter Beardsley, Terry McDermott arrived needing a point to secure promotion back to the top flight.

Darler said: “They were practically already celebrating when they got off the bus.

“For us to win 1-0 at home – Kevin Smith took the penalty, who was a Geordie – to deny them that with the team they had then – incredible.”

Darler has dozens of great stories and put the printable ones in his book “Life’s A Pitch”.

They include how he became involved in charity work and why his current bid to raise funds for mental health service Shout is so close to his heart.

Cambridge gave Darler a testimonial in 2004 and he donated some of the cash to East Anglian Children’s Hospices.

That led to him establishing Cambridge Charity Fundraisers and generating tens of thousands of pounds for local causes through sportsmen’s dinners and fishing events.

But in 2013, Darker had a serious accident at work that resulted in multiple surgeries and years of mental health problems. After contemplating suicide, he was diagnosed with depression and eventually with Post Traumatic Stress Disorder.

Darler returned to work fully only in 2019 but his experiences have helped change within the club and beyond.

He said: “We are now without doubt one of the best clubs in the country for talking about and dealing with mental health.”

This season Cambridge are supporting the Shout 85258 text message service by displaying it on their training kit.

But Darler has gone further, completing a million-step challenge and raising £12,000 for the service.

Darker, who lost a friend to suicide a year ago, said: “The money isn’t even the key thing.

“I wanted to get people talking and what has happened over the last three months has been life-changing.

“If I could prevent one other person going through what I went through and what my friend went through, that’s all I’m looking for.”

But at 62 Darler is not looking for a new job, despite working days of 11 hours or more as he combines his head groundsman role with being matchday safety officer and stadium manager.

He said: “I’ve just renegotiated my contract and  it could keep me here until I’m 70.

“I love the job. I love most of the people in and around the game.

“I live it and breathe it. My wife says I spend more time on the pitch than I do with her.