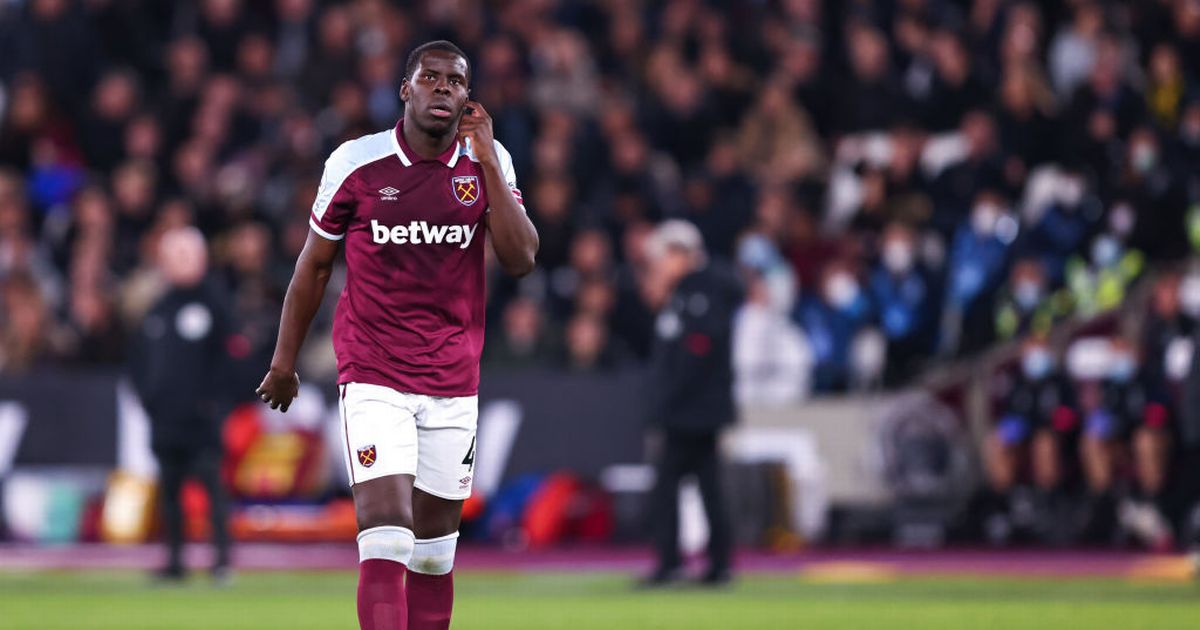 West Ham 1-0 Watford: David Moyes opted to start Kurt Zouma just hours after footage of him kicking a cat was released, with both sets of supporters making their feelings very clear

Jarrod Bowen was the cat’s whiskers as West Ham got lucky – and Kurt Zouma got the bird.

The Hammers were struggling to make headway against lowly Watford until Bowen’s 11th goal of the season, midway through the second half, cruelly punctured the Hornets’ resistance.

Bowen’s 20-yard shot needed a wicked deflection off Watford defender Samir to break the deadlock, and if the relief around the Taxpayers Stadium was palpable, it was greeted by groans among animal lovers everywhere.

Sickening footage of Hammers defender Zouma kicking and slapping a cat, which had found its way into the public domain hours earlier, was not enough for him to be dropped.

But in the court of East end judgement, he was always going to be held to account for his wanton cruelty of a household pet.

As Winston Churchill – the original, not that tedious impersonator squatting in 10 Downing Street – once observed, there is no such thing as public opinion: There is only published opinion.

From the moment the teams were read out before kick-off, Zouma’s name was roundly booed, and it serves him right.

West Ham manager David Moyes is a fair-minded individual and it is his prerogative to pick and choose whoever he wishes, but he must have taken leave of his senses.

To select the Cats Protection League’s new public enemy No.1, on the day he was exposed as a feline abuser, was enough to make eels turn in their jelly.

Asked whether the video footage had influenced his decision to play Zouma, Moyes replied: “No, because he is one of our better players. But it is certainly ongoing and the club are dealing with it, so that is a separate matter.”

In truth, Zouma played pretty well, and West Ham’s challenge for the top four, FA Cup and Europa League is a tribute to Moyes’ resourceful management.

But drop-kicking a cat across the floor and laughing about it is repugnant behaviour unworthy of the claret and blue shirt.

When the 6ft 3in centre back was fouled by Josh King in his own 18-yard box, Watford fans responded with a unique chant in football’s long tribal history: “That’s how your cat feels.”

Zouma apologised after footage emerged in The Sun, claiming it was an “isolated incident”.

“I want to apologise for my actions,” Zouma said. There are no excuses for my behaviour, which I sincerely regret,” he said.

For much of a tight contest, the stench of animal cruelty appeared to weigh heavily on the shoulders of Zouma’s team-mates.

The Hornets should have gone ahead after 17 minutes, but Juraj Kucka could only head Hassane Kamara’s cross off-target when he should have scored.

It took the Hammers 36 minutes to release the handbrake, former England keeper Ben Foster sprawling to deny Said Benrahma, the Algerian smashing the rebound against a post from a tight angle.

Bowen finally found a way through, and later rattled a post, but Watford – expertly organised by former England coach Roy Hodgson – did not play like a doomed side.