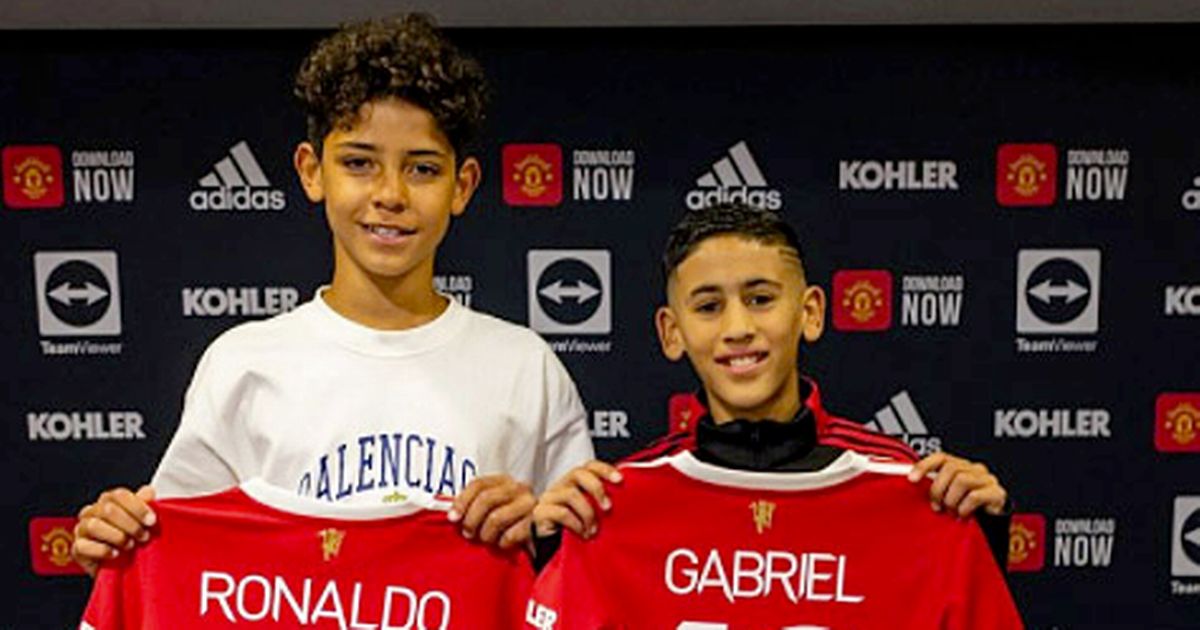 Cristiano Ronaldo’s son has put pen to paper on a new contract with Manchester United, following in his father’s footsteps by representing the Premier League giants

The news comes just days after the youngster, 11, was pictured training with his dad during the Premier League’s recent winter break.

Ronaldo’s oldest son, named after the Portuguese icon, was pictured posing with United’s famous No7 shirt after agreeing to extend his stay in the club’s youth set up.

Cristiano Jr stood alongside Gabriel – another promising talent – who boasts more than 26,000 followers on Instagram and has a sponsorship deal with Nike.

Ronaldo is yet to comment on his son’s new contract at Old Trafford and the youngster doesn’t have his own social media account.

Is Cristiano Ronaldo the greatest footballer of all time? Let us know in the comments below!

Cristiano Ronaldo Jr has signed a contract at Manchester United
(

The 36-year-old recently shared pictures of him training with Cristiano Jr, captioned: “Present and future.”

Ronaldo’s comments would suggest his oldest son has a chance of following in his father’s footsteps by becoming a professional footballer.

And he could hardly ask for a better role model, with his dad winning five Champions League titles and the prestigious Ballon d’Or award five times.

Ronaldo has four children, who he raises with his partner Georgina Rodriguez: Cristiano Jr, Eva, Mateo and Alana Martina. The couple are expecting twins this spring.

“Only time will tell,” said the football icon in Georgina’s new Netflix series, I Am Georgina. “I will never pressure him. He will do what he wants.

“Also what I want the most for Cristiano and everyone else is that they’re happy and that they choose what they want. I will support in any way.”

Speaking in December 2020, Ronaldo added: “We’ll see if my son will become a great footballer. He has potential. He is fast and dribbles well, but that is not enough.

“I always tell him that it takes work and dedication to have success. I won’t pressure him to become a footballer, but if you ask me if I want him to, yes I would like it.

“The most important thing is to become the best at whatever he does, whether it is as a footballer or a doctor.”

Discussing Cristiano Jr’s upbringing in 2015, the forward said: “It’s not easy, it’s not going to be easy but for me in my mind the way of thinking, it’s all about education.

“If you will give good education, he will be strong and he will now appreciate the things. I cannot avoid to show him a good car, good houses, a good quality of life.

“You cannot avoid you know… if you will be in my shoes what are you going to do? It’s all about education, you have to give good education and pass to him.