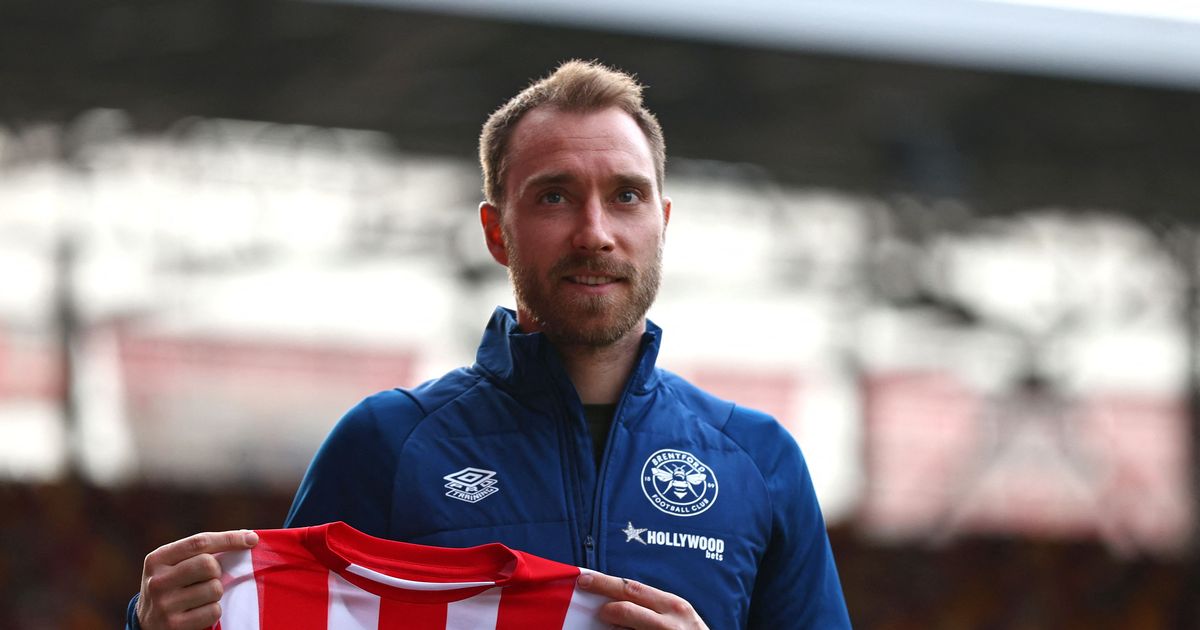 Christian Eriksen hopes that people can view him as a footballer, rather than a cardiac arrest survivor now he is poised to make his return to the professional game.

Eriksen joined Brentford on a six-month contract in January and is now feeling his way back into competitive football, just seven months after he collapsed on the pitch while playing for Denmark at Euro 2020.

The 29-year-old midfielder has been fitted with an implanted cardioverter-defibrillator (ICD), which has allowed him to continue his playing career.

While he will not be considered for Brentford’s match against Crystal Palace on Saturday, Eriksen is due to play in a friendly on Monday .

Now he is nearing what will be an emotional return, the former Tottenham star is asking the media and public to focus on what he can offer on the pitch, rather than his remarkable backstory .

Christian Eriksen was officially presented as a Brentford player on Friday
(

“I hope it will now be about the football and not what happened last summer,” he said at his unveiling on Friday.

Eriksen signed for Brentford after being released by Inter Milan, who he wouldn’t have been able to continuing playing for, due to Italian regulations around ICDs, which are a kind of pacemaker.

The attacking midfielder therefore chose to link up with fellow Dane Thomas Frank by returning to the Premier League, where he made 226 appearances for Spurs.

“I won’t change my style of play,” he told BBC Sport this week.

“I have had the time to be disciplined for the last six months to do extras, so even now maybe I am in a better condition than before, just the football missing.

Christian Eriksen wants people to focus on his footballing ability
(

“I feel like me so I don’t see a reason why I can’t get back to the same level.

“I have done a lot of running and a lot of tests, so the condition is good, but the football touch is something you get in games – to get there is still a few more weeks.

“At the moment, when the coach sees me fit and wants me to play then I’ll be able to. But at the moment we just take it day by day.”

Bees manager Frank is excited by the prospect of seeing Eriksen back playing.

“I must say he’s bubbling,” he said. “We are having him seven months after the incident, so he missed badly being part of the group, being part of a club and hopefully we can add new chapters to the Brentford story.

“He loves to be with the boys, being on the grass, playing football.