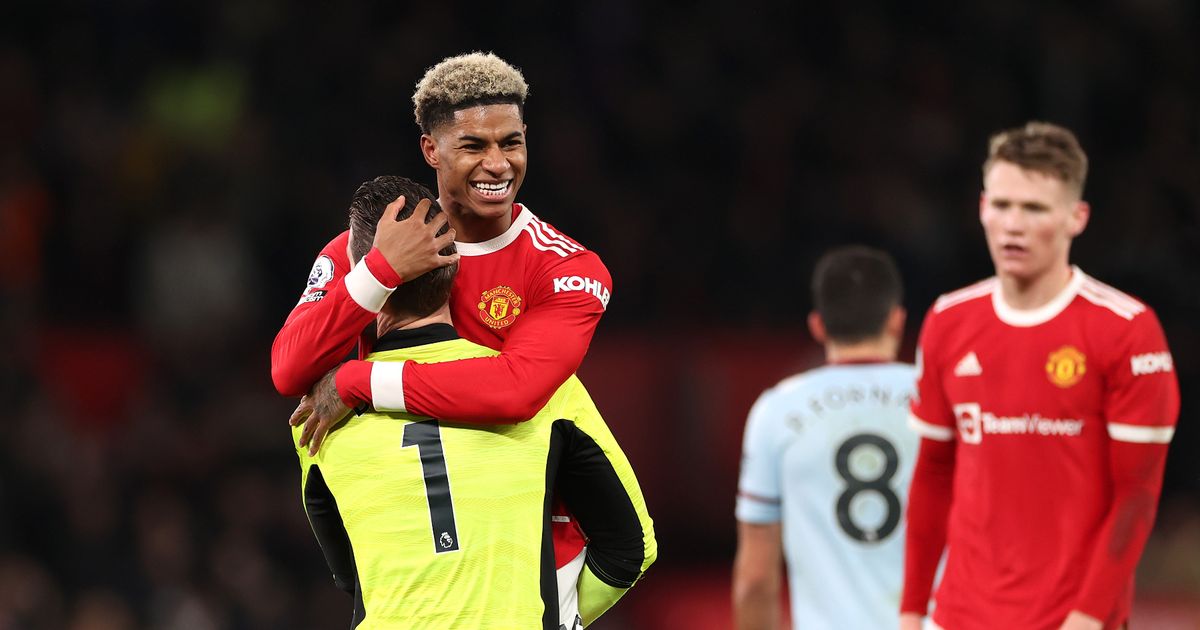 Marcus Rashford hadn’t scored for Manchester United since October before netting twice in as many games this week, and his late goal against West Ham could be a real turning point

It says everything about Manchester United ’s fall from grace that there are those who think Marcus Rashford should stop trying to feed hungry kids and concentrate on football.

It’s hard enough wearing the No 10 at the biggest club in the world without your critics blaming every squandered chance and misplaced pass on your capacity for listening to your conscience and doing the right thing.

Forget his upbringing on the tough streets of Wythenshawe, Rashford is a sensitive soul.

But he’s also a born-and-bred Red who feels every United defeat as much as any fanatical Stretford Ender.

You can be sure he would gladly swap his MBE for a Premier League medal.

Anyone who doubts Rashford’s commitment should just take a look at his frenzied celebration in front of kindred spirits after he had added another chapter to Old Trafford’s annals of dramatic injury-time winners.

His finishing touch to Edinson Cavani ‘s cross to the far-post was routine enough for a player of his talent.

But it cannot be underestimated what Rashford’s first home goal in three months might now mean for both club and player.

His beaming smile lit up the stadium and was only extinguished when he was buried under an avalanche of team-mates.

Sixty yards away on the touchline, interim United boss Ralf Rangnick danced with the delight of someone who had just discovered the meaning of Fergie-time.

United slipped out of the top four when Rashford scored in the 4-2 defeat at Leicester on October 16. But they are back where it matters now.

West Ham also have designs on qualifying for the Champions League.

And David Moyes left for London still convinced that Rashford’s winner with the penultimate kick of the game should have been ruled out for offside despite a VAR check.

Rangnick had summoned Rashford from the substitutes’ bench just after the hour with his team toiling.

His desperation became even more obvious when he sent on Anthony Martial for the last eight minutes along with Cavani.

Martial has spent January trying to escape to Sevilla on loan. In midweek, Rangnick claimed the Frenchman didn’t want to play at Brentford.

But it was the three substitutes who combined to win the game.

Rashford was mobbed by teammates after the victory
(

Ryan Fredericks’ poor header fell to Cristiano Ronaldo and he freed Martial to burst into the West Ham box.

His pass to Cavani had a hint of offside about it, but when the Uruguayan picked out Rashford at the far post, he couldn’t miss.

When VAR official Paul Tierney gave the goal the all-clear, it sparked another celebration.

Sir Alex was there to watch. And it was also great to see Denis Law cheering on his old club, despite his fight to beat the cruel effects of dementia.

United may be back in the Champions League places, but they will have to play better than this to stay there.

It is clear their players are struggling to implement Rangnick’s methods.

Ralf Rangnick’s substitutes made the difference
(

West Ham were able to hold the home side at arm’s length with some ease until the game opened up in the last 20 minutes.

Bruno Fernandes thought he had put one on a plate for Ronaldo after 20 minutes with a cross whipped with pace and menace.

Ronaldo might have thought Areola would be coming off his line to clatter him and failed to make any contact with his head.

But Hammers’ keeper Alphonse Areola was largely untroubled in his first Premier League appearance for the club.

Areola did well to claw away one rising drive from Fred after the Brazilian midfielder had got the luck of the bounce off Declan Rice.

But in the closing stages, there was also a growing West Ham threat at the other end.

Jarrod Bowen fired a shot into the sideneting and Thomas Soucek sent a flicked header a fraction wide of the post.

When Rice’s cross was deflected goalwards by the head of Raphael Varane, it needed a smart save by David De Gea to spare the Frenchman’s blushes.

But then, in the fourth minute of injury-time, Rashford struck and all hell broke loose.