The former Rangers striker was one of his country’s leading lights in France five years ago as they reached the knockout stages.

Lafferty played in group games against Poland and Germany, both of which they lost.

For the decisive win against Ukraine he was dropped however, a decision that clearly didn’t sit well with him.

Northern Ireland would go out to Wales in the last 16, but they had very much exceeded expectations.

Following the defeat the squad threw a party before they jetted home and Lafferty has discussed the antics from that night.

Kyle Lafferty joked about the decision to drop him

The team’s security guards brought out their unloaded guns and he held one to O’Neill’s head and joked about his snub against Ukraine.

He told Open Goal last summer: “After the Wales game it was just like ‘let loose’.

“And there was always the three security guards that always came with us. If two of us wanted to go the the shop, one of them would come with us.

“But they’d always carry guns. They were top guys, you don’t mess with these guys.

Michael O’Neill made a bold call for the Ukraine win
(
Advertisement. Scroll to continue reading.

“So they started drinking as well. We got friendly with them and we were always chatting and they said ‘Give us 10 minutes and we’ll come back’.

“So we were like ‘What the f*** are they doing, are they bringing more drink? There’s loads here.

“They came back with all their guns. Night vision goggles, big guns, everything! Obviously not loaded.

“So we’re in this room and we’re like Rambo. Night vision goggles, guns, p***ed.

“Michael O’Neill’s sitting there and I’ve went up to Michael and I put the gun to his head and said ‘Do you regret dropping me against Ukraine now you p***k?’

“Thinking back to it I’m like what’s going on man.”

Lafferty conceded at the time, as O’Neill rang the changes, that the decision to drop him for the Ukraine win was the right call.

“I’m disappointed for myself but hand on heart, the call the manager made was superb,” he said at the time.

“To change five players from the first game is a massive shout but it’s paid off and we got the three points.” 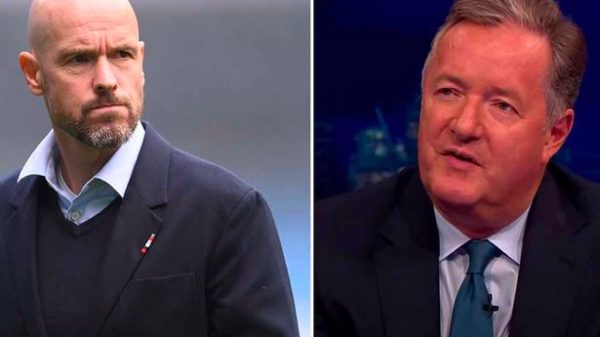 Erik ten Hag made the bold call to leave Cristiano Ronaldo among the subs for the entirety of Man Utd’s 6-3 thrashing at the...