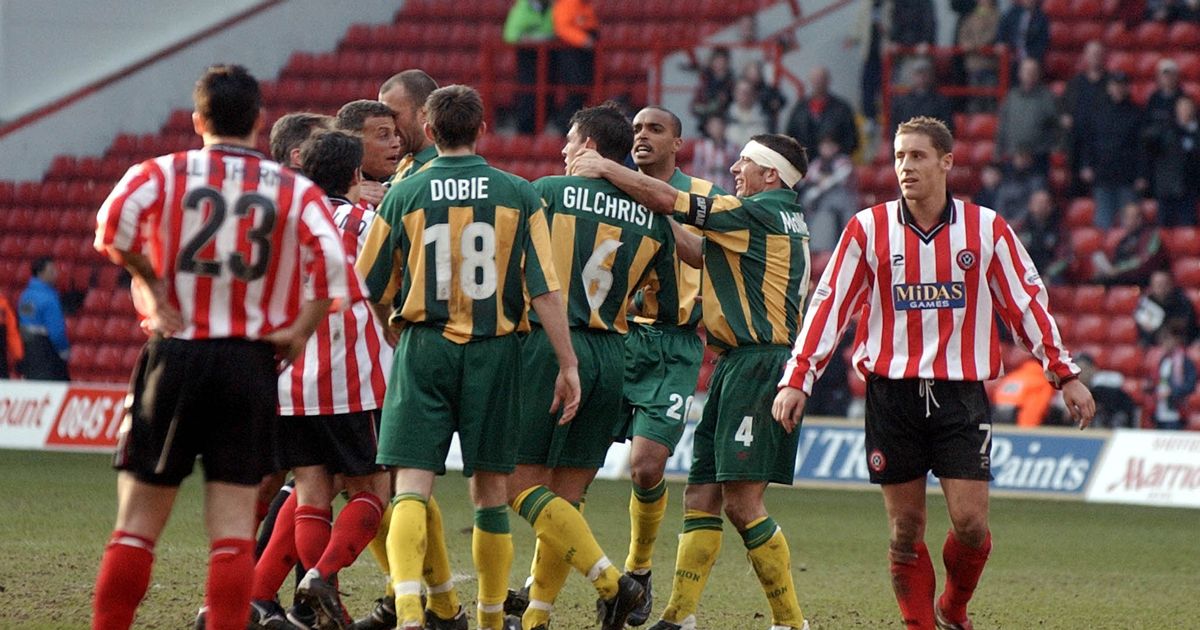 Gary Megson wants to put the record straight 20 years on from one of football’s most-infamous games.

Megson was West Brom boss when their Division One match at Bramall Lane was abandoned because Sheffield United had been reduced to six players.

Neil Warnock’s side had three players dismissed before two more went off injured, forcing referee Eddie Wolstenholme to end proceedings with the Baggies 3-0 up with eight minutes remaining.

“What riles me is there has to be a name for it, and people call it the Battle of Bramall Lane,” Megson told Mirror Sport.

“It’s a complete misnomer. That suggests there were two teams battling. One had no players sent off, finished the game and won 3-0.

“The other had however many players sent off and others injured so they couldn’t finish, so it speaks for itself.

HAVE YOUR SAY! What are your memories of the Battle of Bramall Lane? Join the discussion in the comments section!

A melee between the West Brom and Sheffield United players
(

“It wasn’t a battle, it was a bit of an onslaught we couldn’t do anything about it.

“I live in Sheffield and have a lot of friends who are Sheffield United supporters and quite a few of them have said it was quite humiliating for them.”

The exodus of United players began when goalkeeper Simon Tracey was sent off for handling outside his area.

Georges Santos and Patrick Suffo followed for violent conduct and West Brom led 3-0 with 11 minutes remaining when Michael Brown went off with a groin injury.

Rob Ullathorne left the pitch three minutes later with a hamstring problem, forcing Wolstenholme to abandon the game because the rules state matches cannot continue if a team has fewer than seven players.

Megson has always been dubious about Brown and Ullathorne’s injuries and suspects Warnock told the duo to come off to force the abandonment of the game, even though both were independently verified.

“Everybody, every single person with half a brain knows exactly what was going on,” he said.

“I remember telling the players ‘don’t go near them, don’t give anybody an excuse to go down injured, saying they had a knock’, because I could just feel what was going on.

“Unfortunately Robert Ullathorne pulled his hamstring stood all on his own.”

Scott Dobie scored for the Baggies before the game was abandoned
(

Megson went up into the stands because he felt he would get himself sent off because he was so incensed.

“I turned round and said to my assistant Frank Burrows, ‘I’m going to have to go and sit up top because I’m going to lose my head here’,” he said.

“So I went up to the top, spoke to Derek Dooley and when I sat down the game finished.

“I went into the dressing room and told the players ‘stay where you are, keep your kit on because we’re going out to finish’. I went to see the referee and he said ‘that’s it’. He had to abandon the game because they didn’t have enough players.

“There had been no precedent, it had never happened before, certainly in first-team games. That’s understandable because as a manager who would make sure it never happens to a team you are associated with.

“There were a lot of things going on which were distasteful and I was angry at the time.

“There were things afterwards going on in the tunnel and it was just horrendous. It was more like a physical battle than a football battle and there were just things raining down on us. We just couldn’t believe it, all we did was go there to get a result, which we got.

“Fortunately, the Football League had the sense just to award us the points.”

Ironically West Brom are back at Bramall Lane on Wednesday to rekindle memories of that crazy March day in 2002.

Megson has moved on and while he was furious with Warnock at the time, he can’t be bothered being angry now.