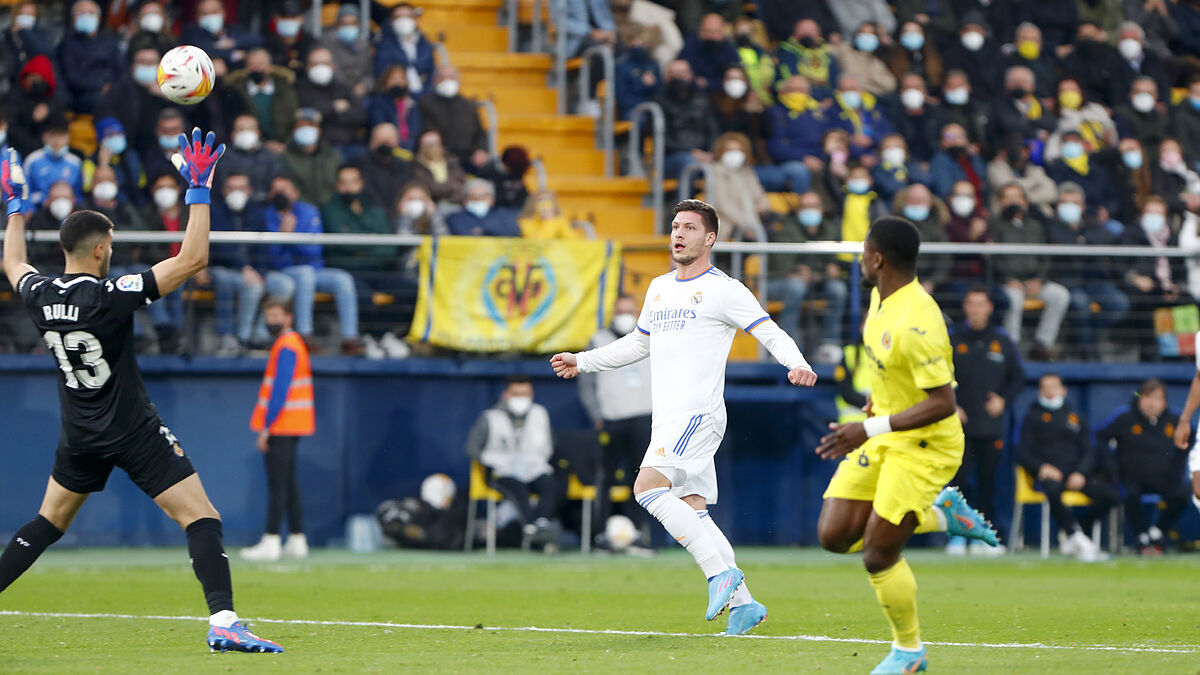 Real Madrid were unable to open up a sizeable gap at the top of the LaLiga Santander table on Saturday afternoon, as they could only draw 0-0 against Villarreal at the Estadio de la Ceramica.

The woodwork was hit on three occasions during the match – first by Arnaut Danjuma and then by Gareth Bale and Luka Jovic in the second half – but neither side could find a breakthrough. It was not for lack of trying, though, as Real Madrid regularly forced Geronimo Rulli into action.

Villarreal started the game in a very impressive manner, with Samu Chukwueze weaving his way into the area early on but being unable to find the right ball, while Danjuma hit the post 18 minutes in. The Dutchman looked to cap off a well-worked Villarreal move, but his initial shot was blocked and then his second effort hit the left post before going away from danger.

Just prior to that Danjuma chance, however, Real Madrid believed that they should have had a penalty. Vinicius Junior was running in from the left wing to try and put pressure on Rulli, who was in possession of the ball, but he was caught by the arm of Raul Albiol en route to the Villarreal goalkeeper and ended up going down in the area. No foul was given, though.

Real Madrid continued to grow into the first half and had arguably their best chance of the opening 45 minutes just before the half-time break, as Casemiro‘s ball over the top for Bale was latched on to by the Welshman, but Rulli came out quickly to close off the angle and make the save.

Eleven minutes into the second half, Bale hit the crossbar. The 32-year-old began to drift out more to the right wing and it was from there that he received a pass from Vinicius before coming inside and getting a shot away, but Rulli managed to tip it onto the crossbar as it went behind for a corner.

The remainder of the game did not have a plethora of clear-cut chances, but Vinicius had a great opportunity to break the deadlock just two minutes after Bale hit the woodwork. Fede Valverde dispossessed Dani Parejo deep inside Villarreal‘s half and then picked out Vinicius in the area, but the Brazilian’s shot was comfortably saved by Rulli.

Just as it seemed as though the game was going to finish as a goalless draw, three of Real Madrid‘s substitutes combined to create a golden opportunity to score. Eden Hazard played a perfectly timed pass in behind for Luka Jovic, who chipped the ball over Rulli but saw it hit the crossbar and come out. Then, from the rebound, Nacho Fernandez‘s effort towards goal was blocked on the line by Serge Aurier.

Real Madrid will feel somewhat disappointed to have not won this match, but they still have a four-point gap over second-placed Sevilla and will be hoping they can be more clinical when they face Paris Saint-Germain in the French capital on Tuesday night.