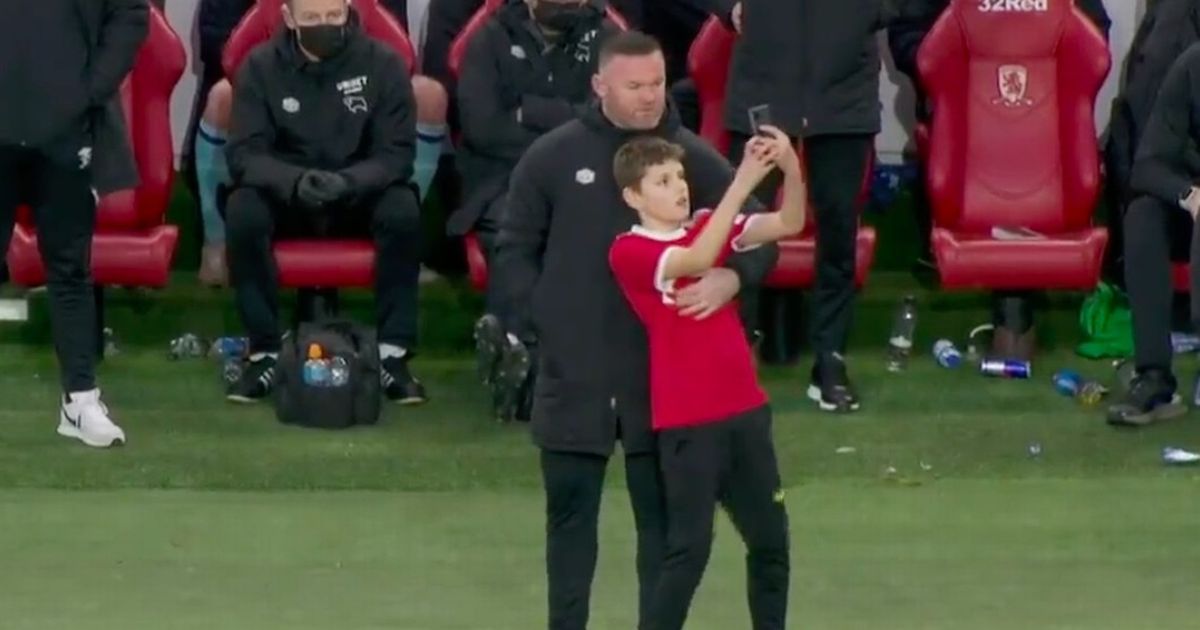 Derby County manager watched his side’s battle against Championship relegation take a hit, with promotion chasing Middlesbrough running out 4-1 winners at the Riverside

Wayne Rooney was happy to grant a young supporter his wish of a selfie, despite a miserable afternoon on the pitch for his Derby County side.

The Rams are facing a battle for their Championship status having been handed a huge 21-point penalty after going into administration.

But under Rooney’s astute leadership his rag-tag squad have a genuine chance of survival having picked up 39 points from 31 games.

Going into this weekend’s clash with Middlesbrough, Derby were just four points behind Reading, who currently sit one space above the relegation zone.

And that gap remains after Boro ran out 4-1 winners at the Riverside on Saturday.

Wayne Rooney leaned in for a selfie with the young fan

The hosts took the lead after 15 minutes when Lee Buchanan scored an own goal, before a spectacular Max Bird strike got Rooney’s side back into the game.

However, two goals in as many minutes on the stroke of half-time all but ended Derby’s hopes of upsetting the odds against the promotion chasers.

Duncan Watmore scored the fourth in the closing minutes, with Chris Wilder’s team now occupying one of the play-off positions at the top of the Championship.

Shortly before Watmore’s goal a young fan – in a Manchester United shirt – emerged from the stands to confront his hero.

And despite what was a disappointing display, Rooney was kind enough to allow him to take a quick picture before he swiftly left the area.

It’s the latest in a growing trend of young spectators running onto the field of play for pictures or to ask for shirts.

Leeds United recently confirmed that they would hand one-year bans to parents of children encroaching onto the pitch, with Covid measures making the rule more important.

Meanwhile, Rooney hoped that the result on Teesside would serve as a wake-up call to his players ahead of a monumental end of the season run-in.

“I think this game, this result, is in a strange way good timing,” Rooney said.

“For myself, my staff and my players it is a reminder of where we are at. It is a good reminder not to get complacent.

“We have got the run-in coming up, we have got a very big game next week against Peterborough and we will prepare for that.

“The lads will have a couple of days to recharge physically and mentally, and then myself and the coaches will have a full week to work with them.”

He added: “I thought it was quite an even game first half. I felt we had bits of control of it and we got the equaliser, and we were OK, and then we concede two sloppy goals that we need to look at.

“It is a disappointing result. Middlesbrough are a good team but I didn’t feel there was that much between the two teams.”