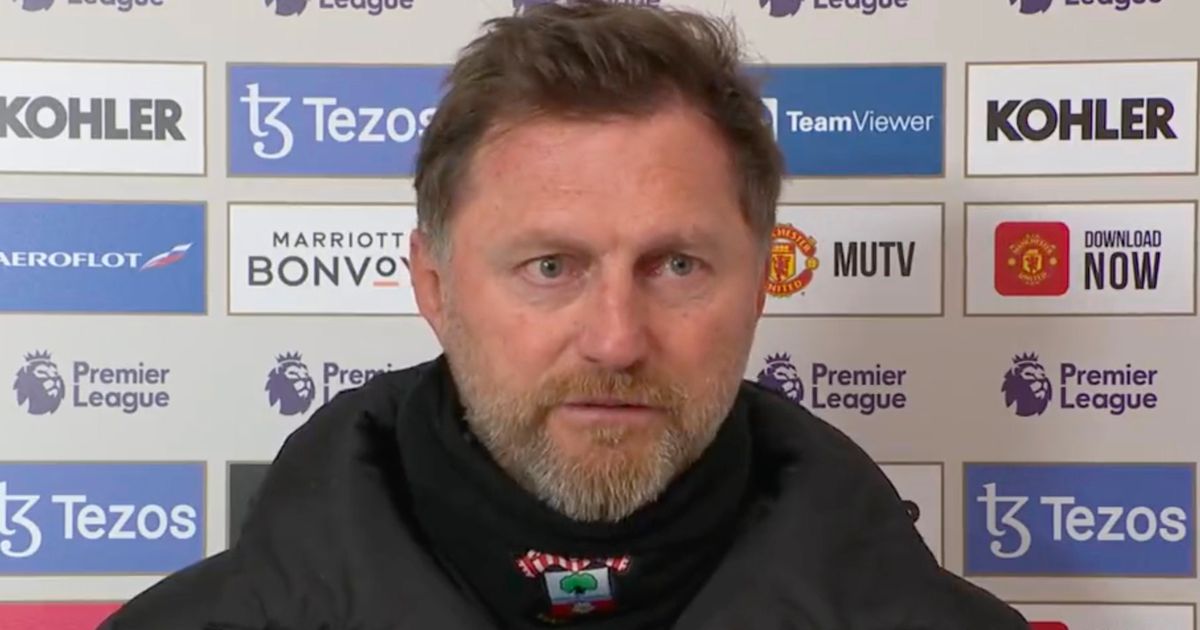 Ralph Hassenhuttl has already discussed who will replace him at Southampton after being tipped for the Manchester United job.

The Austrian guided Southampton to a well-deserved 1-1 draw at Old Trafford on Saturday and pre-match, was suggested as the successor to interim manager Ralf Rangnick by United legend Paul Scholes and former England manager Glenn Hoddle.

Just two days on from the Premier League clash, Southampton chief executive Martin Semmens has revealed that Hasenhuttl has been in talks with the Saints hierarchy over who will replace him at St Mary’s.

“When you go and look for a new manager – and for the record we do a huge amount of recruitment and scouting on new managers – and we do know potentially who our new manager will be, and Ralph and I have talked about it,” Semmens said on BBC Radio 5 Live.

Join the debate! Would Hasenhuttl be a good appointment for Man Utd? Let us know your thoughts below.

Hasenhuttl has already held talks over his replacement at Southampton

“It’s not something to be scared of saying out loud [because] people don’t like to say that, but it’s just as important as buying a new striker.”

And not only are his team fun to watch, but their squad is full of young players who the 54-year-old – contracted on the south coast until 2024 – has great faith in, a principle shared at Old Trafford.

“For him, as a manager, he believes in young players,” the Saints head honcho added. “He talks a lot about developing young people and making them better.”

While Hasenhuttl is a tactically astute coach, what prompted Scholes and Hoddle to back him for the vacant post was his relationship with Rangnick, who he worked under at RB Leipzig from 2016 to 2018.

“Would that not be a good fit? For me, if they’ve worked so closely together, if [Rangnick’s] going to be the sporting director eventually – that works,” Hoddle began on BT Sport.

“Southampton will want to keep him, of course they would, because he’s doing such a very good job with the players that he’s got there.

“He’s doing an excellent job. If he wanted it, it would make sense.”

Hasenhuttl has been tipped for the Man Utd job
(

In agreement, Scholes followed up by saying: “It’s not really something that’s crossed my mind until the last 10, 15 minutes when Glenn mentioned it. Watching that interview there is a closeness between them.

“As a sporting director, he was the right choice at the right time for Leipzig – did brilliantly – and I’ve always liked him. I’ve always thought the football he plays at Southampton with not the best squad… The type of football has worked for them. His teams have been good to watch, I think it comes across really well.

“This would be a different kind of pressure; I think people around this club, and fans especially, are thinking more of possibly [Mauricio] Pochettino or an Antonio Conte and what people have been at the bigger clubs.

“The more I think about it, I don’t think it would be a bad thing. The way he goes about his business, he looks good.”