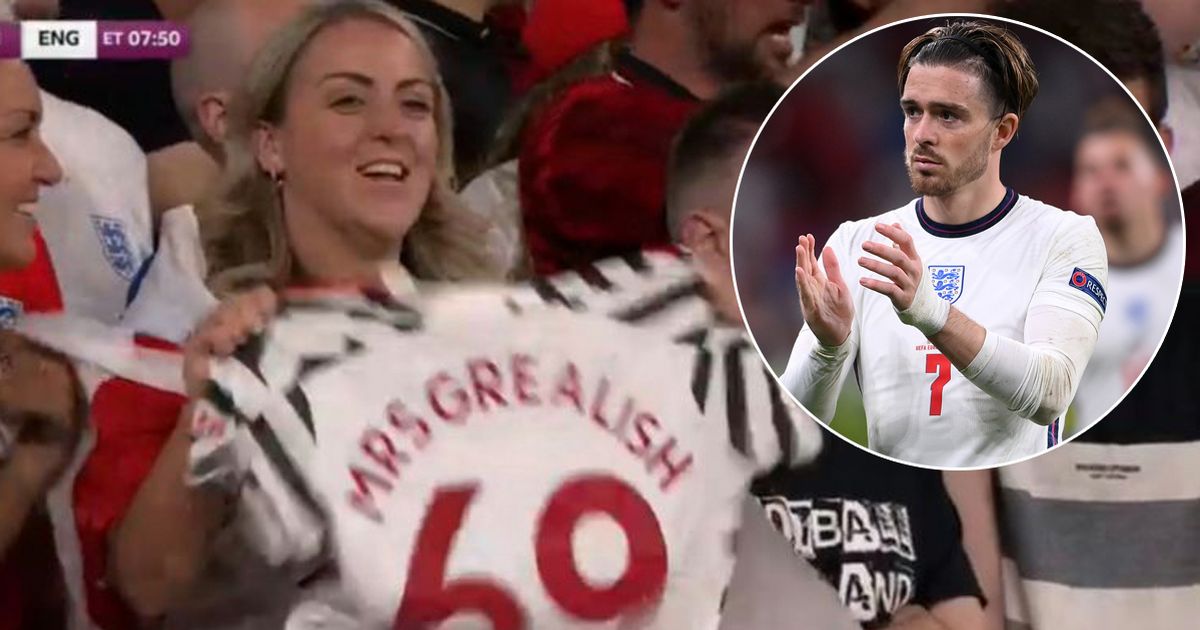 It was one of the most recognisable images from the Euro 2020 final.

As tension gripped Wembley Stadium, with a penalty shootout looming large, thousands could barely bring themselves to look at the events on the pitch.

Amid the scores of fans covering their eyes, the cameras panned to England fan Darcie Philp, smiling as she waved a shirt bearing the name and number ‘Mrs Grealish 69’.

Several months on, and with England having booked their place at another major tournament under Gareth Southgate, Mirror Football spoke to one of the unlikely stars of the Euros coverage in an attempt to get the answers to the big questions.

Has the extra recognition brought any new perks for ‘Mrs Grealish 69’? How did her friends and family react? And, most importantly, why was it a Manchester United shirt?

“At the time I didn’t have a clue I was on telly,” Darcie tells Mirror Football.

“My phone was on airplane mode at the time because I was really low on battery, and then my sister got a text and said our mum’s just seen us on telly.

“Your mum can spot her kids in a crowd of a million people so I thought ‘yeah, fine’, but then when I came out of the game my phone was going mental and people were like ‘your faces just kept coming on screen, right in the centre’.”

Darcie had been to England’s last-16 and semi-final victories, with a friend helping her secure tickets, but says her mum forced her to find room for sister Saskia – the owner of the bizarre shirt – for the final.

Sensing an opportunity, she agreed, but also made sure her sister brought the shirt along, with Saskia negotiating down from wearing the shirt in the stands to merely bringing it along in her bag.

“So I was like ‘you have to wear the shirt’ and she said ‘Darcie, I am not wearing the shirt, it’s a United shirt with Grealish on the back, I will get beaten up’.

“When we got to the game, because we were right at the front, you know how everyone lays out their home football flags, I laid [the shirt] down there. So people were walking past when they were getting to their seats and glaring at it, just in a really confused way like “what on earth?” – I didn’t really care but my sister was so embarrassed

“Then I saw [Grealish] coming on and I just waved the shirt. Obviously between me and my sister it was just a joke between us, we were just laughing and had no idea anyone else could see, until it all came out and we were like ‘oh god’.”

At this point, you’re probably all wondering the same thing. You probably read the words “a Man Utd shirt with Grealish on the back” and didn’t just let it slide. You’ve probably been reading on in an effort to find out why.

Don’t worry, the Manchester United club shop was just as baffled when they received a request for the unique letter-number combo.

Saskia, the owner of the shirt, is a United supporter whose love for Grealish hasn’t gone unnoticed among her friends (including a Spurs-supporting housemate), with pals claiming she cares more about one rival player than about her own team’s results.

This is how an inside joke ended up becoming one of the most talked-about shirts of the Euros.

“For her birthday back in May, [Saskia and her friends] did a s*** football kit night,” Darcie explains.

“They wanted to get her the worst looking kit, so that’s why they chose the third kit, and if you see a picture of my sister from the front in the full kit, oh my god it’s hideous.

“They actually got it from the Man Utd club shop, they ordered it and her housemate sent me the email where Man Utd came back and said ‘Is this correct? You are aware Grealish is not a United player’.

“She said ‘all correct, can you just put a gap between the S of Mrs and the G of Grealish’.”

Grealish’s move to Manchester City hasn’t dampened either of their enthusiasm, though, as “As long as he’s got an England shirt on at the World Cup it’ll be fine”.

So, have there been any upsides to the new-found fame?

She reveals the makers of The Big Fat Quiz of the Year were in contact over a potential appearance, though ultimately nothing came of it, and the only perk so far has been a free (if “disgusting”) shot of alcohol from a group of lads who recognised her at a Greek restaurant.

“A lot of people said I should have jumped on the merchandise but I’m not quick enough for any of that,” says Darcie, though she wouldn’t say no to the opportunity to watch Grealish up close again at the 2022 World Cup in Qatar.

“The World Cup’s going to be all around my 30th so I really want to go,” she says.

“A free drink [is] as far as it’s gone, but if people want to get me anything else I’m open to it, especially a World Cup ticket!”