Liverpool will take on Real Madrid in the last eight of the Champions League during a make or break week for Los Blancos.

The Reds drew the Spanish giants in what will be a repeat of the 2018 final.

But Zinedine Zidane’s side will need to produce in three successive games if they are to enjoy a successful season.

Madrid will host the Reds on either April 6 or 7 in the first-leg of their quarter-final.

Both teams are trying to chase down Atletico Madrid in the La Liga title race so will be desperate for maximum points.

Then Los Blancos will have to travel to Anfield on either April 13 or 14 for the decisive second-leg.

It means Zidane will be hard pushed to rotate his squad and the club’s resources will certainly be tested.

Liverpool on the other hand face Aston Villa on Merseyside in between their two matches against Madrid.

The Reds will surrender their title this term, but may still have ambitions of finishing in the top four.

Jurgen Klopp has already spoken glowingly about the prospect of facing the team who denied him in the final three years ago.

“It’s obviously a tough draw but I am fine with it because if you look at all the other teams you think, ‘Oh my god’ because they are all strong and all have quality, that’s clear. I am really looking forward to the games.

“It’s only just over two years ago that we faced them and it was a tough night for us, so to get the chance to play them again is cool.” 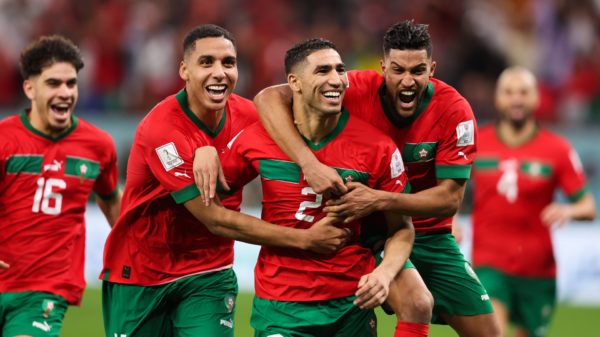 AFTER scoring the winning penalty that sent his country to the quarter-finals of the World Cup, Achraf Hakimi ran straight to the stands to...