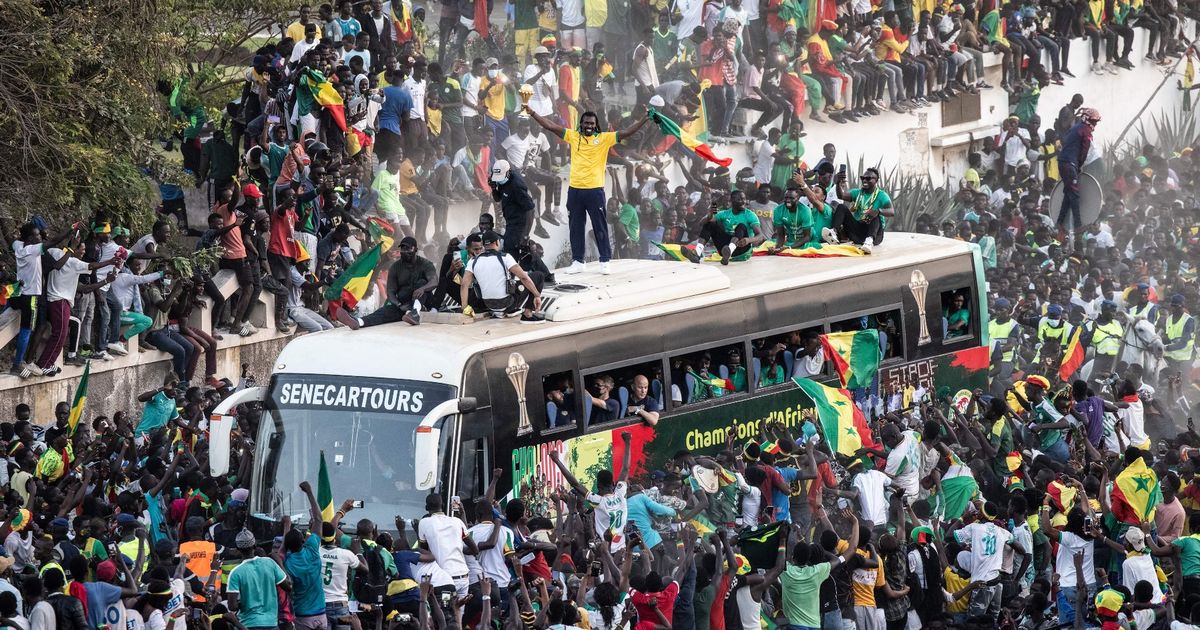 Jurgen Klopp has revealed that Sadio Mane is currently in his homeland celebrating Senegal’s historic African Cup of Nations triumph, and hasn’t spoken to the forward too much due to the ongoing celebrations.

The Liverpool striker converted the decisive penalty in his nation’s shootout win over Egypt on Sunday to earn the Lions of Teranga their first ever international trophy.

The 29-year-old got the better of his Reds’ team-mate Mohamed Salah in the final as the game was settled by spot kicks, with neither team able to find the breakthrough over 120 minutes of action.

Providing an update on the African pair, Klopp said he has been messaging Mane, who continues to celebrate in Senegal, and admitted he doesn’t expect the AFCON victor to return to Liverpool until later in the week.

Jurgen Klopp has revealed he has been messaging Sadio Mane who is currently celebrating in Senegal
(
Advertisement. Scroll to continue reading.

“Sadio flies out if it’s possible on Wednesday night, so will arrive here on Thursday, but he is, of course, then not involved in the Leicester game,” Klopp told reporters.

“They’ve had an incredibly intense time, so when he is back we will talk to him and we will see how we can use him.

“We have texted a little bit here and there but he is still in Africa, still in Senegal, celebrating and we will see – Wednesday night or something like that we will send him out.

“But yes, it was obviously a big tournament and meant the world to him.”

While the German confirmed Mane’s absence from the Liverpool’s Premier League clash with Leicester at Anfield on Thursday night, he revealed Salah was in contention to feature.

Where does Sadio Mane rank in the debate over the greatest African players of all time? Have your say in the comments!

The Egyptian rejoined the Reds on Tuesday, eager to put his AFCON heartbreak behind him and resume his club responsibilities.

Klopp additionally revealed that he watched Sunday’s showpiece final, but found it difficult viewing given his emotional attachment to both players.

“It was a strange game to watch, to be honest, from an emotional point of view,” he reflected.

“I obviously wish them the best, the very best, in absolutely everything [but] it was not possible in this game.

“So, Mo couldn’t make it but played a really good tournament and Sadio made it and yes, now I have to say really congratulations, outstanding.

“I saw some pictures from Senegal, what it meant to them directly after the game. Obviously it’s the first time in their proud history they could win the AFCON and [an] absolutely outstanding achievement.

“The pressure on Sadio with missing the penalty in the game and then the last one… wow!

“I cannot imagine how he would have felt. But you could see the joy and relief after that so he was obviously in the best possible shape.”