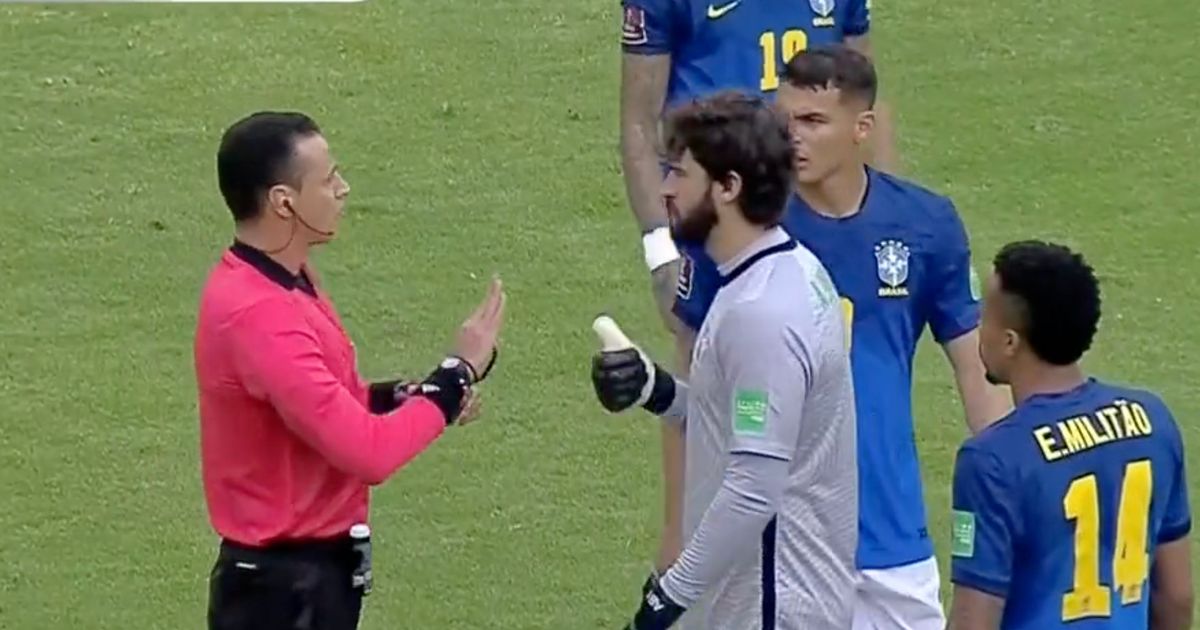 VAR twice came to Alisson’s rescue whilst playing for Brazil

Alisson hailed the intervention of VAR after he twice saw red cards rescinded whilst playing for Brazil against Ecuador.

The Liverpool goalkeeper received his marching orders in each half, but managed to remain on the pitch after consultation with VAR.

Alisson ran out to the edge of his box as he attempted to clear the ball, but made contact with the head of the forward on his follow through.

Initially being dismissed, VAR then intervened and downgraded his red to yellow.

The official was not shy in handing out cards through the night as both teams finished with ten men.

Have Your Say! Should Alisson have been sent-off? Tell us here.

Brazilian Emerson Royal and Ecuador’s Alexander Dominguez were sent off

Brazil could’ve then been down to nine in Quito after Alisson was handed a second yellow for a mistimed punch that saw a penalty awarded in the second-half.

However VAR then reversed the decision.

The Liverpool star welcomed the intervention, insisted he acted “properly” and that his side could’ve been “unfairly” hampered.

“I think this was the first time this has happened in the history of football,” he said.

“I think that I acted properly in the moves and I think my team mates helped me a lot, they were incisive in their complaints to the referee. This shows once again the importance of using VAR in football.

“I am happy with the VAR, if it wasn’t for the VAR we’d have been punished unfairly.”

Despite that Ecuador boss Gustavo Alfaro was left questioning the calls after the match, which he feels may have denied his side a landmark win.

“We’re shocked by the development of the match, by all the strange things, by everything that happened,” he said.

“I don’t want any favours, all I want is justice.

The goalkeeper avoided a second dismissal following this collision

“We feel that we had the chance to achieve a historic victory taken away from us.”

Brazil have already secured their spot at the 2022 World Cup, but named a starting XI packed with Premier League stars.

A host of top flight players have jetted off to Dubai for some warm weather training but Thiago Silva and Emerson Royal started the game, with Fred, Philippe Coutinho and Raphinha also named in the line-up.