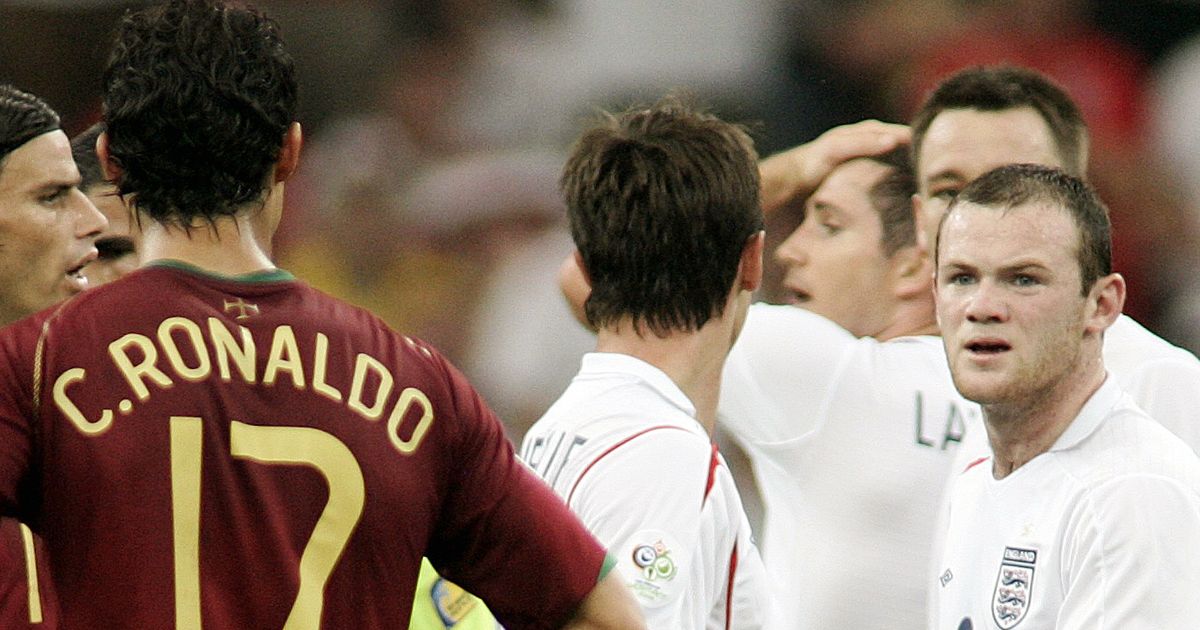 Wayne Rooney was sent off during England’s World Cup quarter final with Portugal in 2006, with his then Manchester United teammate Cristiano Ronaldo delivering an infamous wink

It was an incident which went down in the pantheon of England heartaches in a major tournament.

Replays showed that Rooney had stamped on Ricardo Carvalho, leaving England to battle on valiantly with ten men, taking the game to penalties before the inevitable disappointment.

But it was Cristiano Ronaldo – as is his way – that stole the headlines with one of the most infamous winks in the history of England’s national team.

Having protested right in the face of the officials it was a sign of a job well done when England’s talisman, and his Manchester United teammate was dismissed.

HAVE YOUR SAY! Would England have won the World Cup without Rooney’s red card? Let us know in the comments

Ronaldo quickly became Public Enemy No.1 back in England, with the prospect of the two United players clashing back at Carrington eagerly awaited.

But Rooney, speaking in an Amazon Prime documentary looking back at his record-breaking career, admitting that he quickly look to squash any potential animosity.

Instead, he made a vow to the Portuguese superstar that they would put their troubles behind them and go and win the Premier League title – a feat they unsurprisingly achieved.

He explained: “I remember speaking to Ronaldo and saying to him ‘there’s gonna be a lot of media coverage on what’s happened, but I’ve got no issue with what you’ve done. Let’s get ready to go and win the Premier League.’

“I think he was relieved!

“Other players might have had an issue with him, but I’ve got no issue whatsoever.”

“My focus was on Manchester United.”

Former Chelsea defender has since claimed that he felt the incident wasn’t intentional, but as for Rooney himself? He’s not so sure.

“My head has just completely blurred out. I don’t know if I’ve meant to do it, or I’ve just come down on him accidentally.”

“As the game went on I was on my own, and I smashed a few things up in the dressing room when I went in.

“I remember I sat there watching it, it was probably the loneliest place I’ve been.

“I sat there thinking ‘if we go through I miss the semi-final and potentially the final, and if we go out it’s my fault.’”

Between the two of them, Ronaldo and Rooney combined for 31 goals during the 2006/07 Premier League season, inspiring them to topple Chelsea in a fascinating battle for the title.