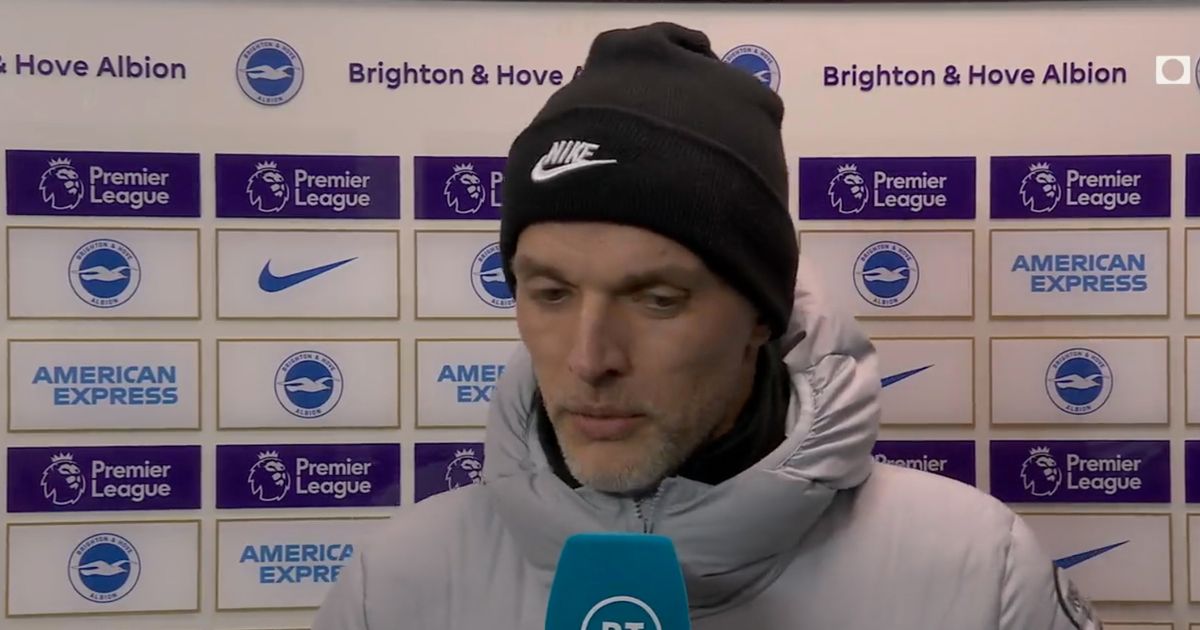 Chelsea were held by Brighton as they lost even more ground on Premier League leaders Manchester City, and Thomas Tuchel has blamed tiredness on their recent slump

Thomas Tuchel has blamed ‘tiredness’ both physically and mentally as his Chelsea side dropped even more points to almost guarantee that their chances of securing the Premier League title this season are over.

Despite taking the lead against Brighton in the first half through a stunning strike from Hakim Ziyech, they were pegged back after the break as Adam Webster found himself unmarked and fired his side level from a free header.

Although Chelsea are through to the Carabao Cup final, there isn’t much to celebrate for Tuchel’s side in the league at the moment, and Ziyech even confused fans as he didn’t even celebrate his opening goal against the Seagulls.

But Tuchel has blamed Ziyech’s lack of celebration, and Chelsea’s lack of cutting edge on ‘tiredness’ as they played their 15th match since the start of December.

Thomas Tuchel has said that his side are physically and mentally tired
(
Advertisement. Scroll to continue reading.

Tuchel spoke to BT Sport after his side drew 1-1 with the Seagulls, and said: “We looked tired, and we are. It’s like this, we knew they were well prepared, they had more time and less games to prepare for this match.

“You see at the end the reaction after the whistle, the stadium celebrated like a victory. That’s what you face.

“We need our full strength to overcome this obstacle at the moment, it’s difficult so no blame for the team. They tried everything but you can see they’re mentally tired.”

BT reporter Des Kelly questioned Tuchel on whether Chelsea’s tiredness was a mixture of mental fatigue as well as physical exhaustion, and the Chelsea boss quickly replied with: “Of course. Look at our schedule.

Although Chelsea should have been delighted to take the lead against Brighton, Ziyech hardly showed any emotion, and Tuchel went on to give his views on the winger’s muted celebrations.

“Of course you can survive with this goal, we can play with a clean sheet, but we were under pressure,” Tuchel said.

“That’s normal. I didn’t see many teams control Brighton over 90 minutes. It’s normal they play brave and bring people to your box and create chances.

“If you can maybe take a chance or half chance for a second goal you can go out and win. That’s what we’d normally be up to.
In the moment it’s difficult to be too harsh on our players because I know what’s going on.

“He can score 20 more and not celebrate. No problem”

Ziyech was also pictured to be rather unhappy with Romelu Lukaku throughout the game, and the pair were seen engaging in conversation constantly throughout the course of the match.

But Tuchel wasn’t too concerned, as he commented on the general feeling of his team at this current moment: “It’s normal they talk, it’s normal they’re not happy.

“It’s normal they don’t like it if we say we want more from them.

“But the reaction from the goal, you see we’re tired. We’re relieved we have a goal but it’s not like pure joy because we were saving energy even there. That’s my feeling of the moment and the team right now.”