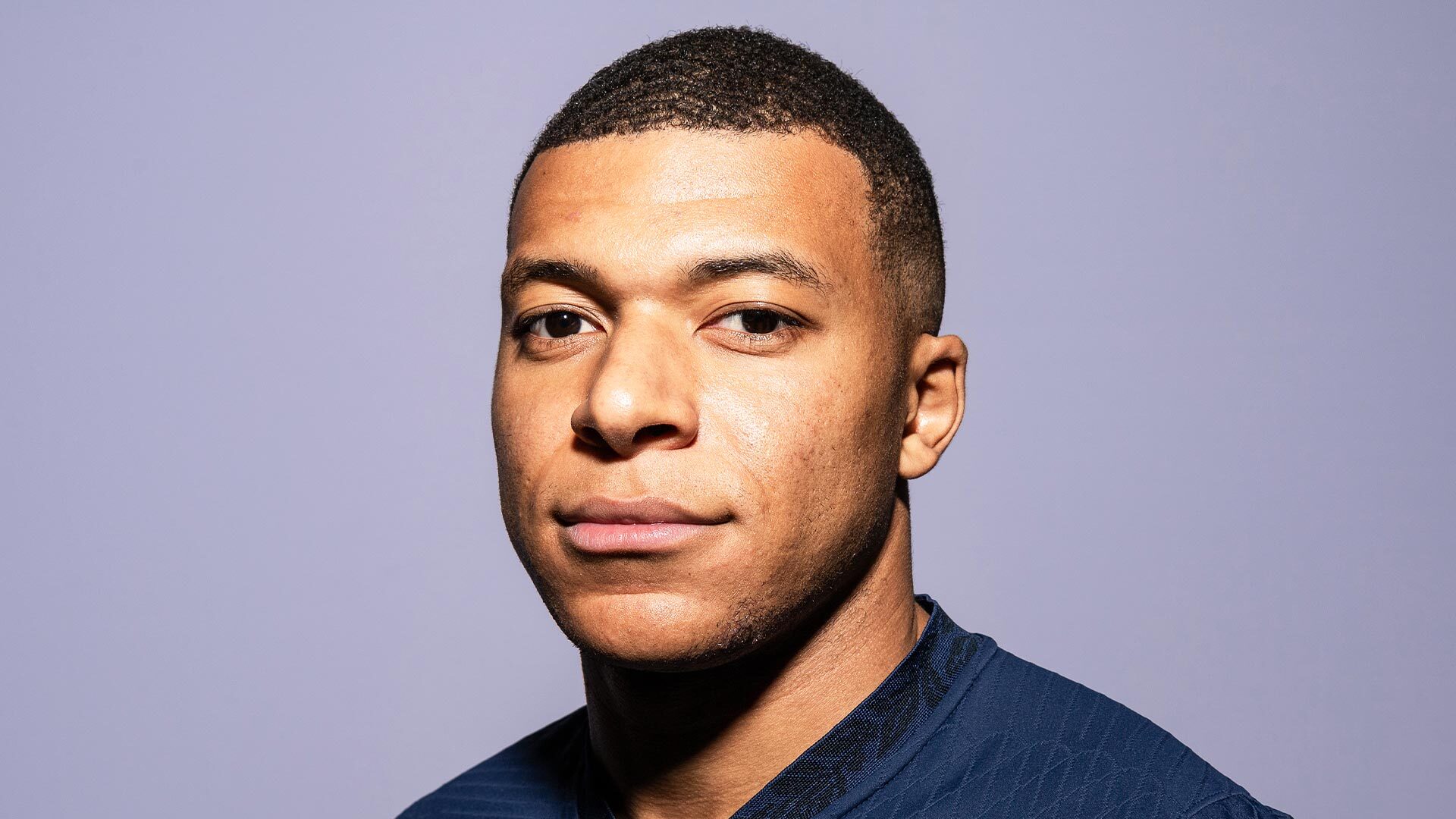 IF England are going to win the World Cup they need to stop the quickest, most expensive and deadliest striker on the planet – Kylian Mbappe.

The top scorer in Qatar can challenge Usain Bolt for pace and has raked in more than £100million this year.

And the 23-year-old powerhouse is so important to France that President Emmanuel Macron begged him not to quit Paris St Germain for Real Madrid this summer.

But he is far from infallible.

Booed at this year’s Ballon d’Or football awards ceremony in Paris, the divisive young star has chinks in his armour, on and off the pitch.

Mbappe has missed a couple of crucial penalties, including one that saw France crash out of Euro 2020. 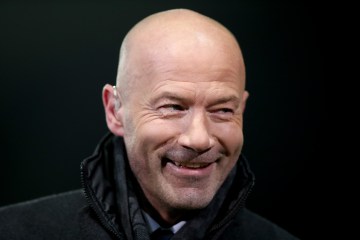 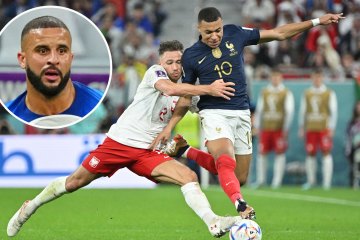 He has reportedly fallen out with teammates, developed a Ronaldo-like superiority complex, demanded the use of private jets and has been accused of hypocrisy.

Mbappe made several ethical stands while at the same time turning down the move to Real Madrid this summer, after Paris St Germain’s Qatari owners — who are linked to alleged human rights abuses — offered him £156million to stay at the club.

This was a player who organised a national-team revolt against sponsorship by the fast food firm KFC and French gambling website BetClic.

Such double standards tarnished the image of a sporting genius who, during the 2018 World Cup final, high-fived an anti-Putin pitch invader from Russian protest group Pussy Riot in front of the despotic Russian president — a gesture for which he deserved a lot of credit. Mbappe also gave all his earnings from that controversial tournament to charity.

Prior to the even more tarnished World Cup in Qatar, he said: “I want to be more than just the guy who shoots the ball and goes to his yacht and takes his money.

“Sometimes people think I have to just play football. But I think not. I think the world has changed.’’

Mbappe was born in the troubled Parisian suburb of Bondy, to Cameroonian dad Wilfried, a football coach, and mum Fayza, a handball player of Algerian heritage.

At six Mbappe witnessed disaffected youths torching patrol cars as they rioted against police harassment. But his parents knew from early on that their son had the talent to escape such problems.

By the time he was 11 a host of top teams wanted him to join their youth sides, with Real Madrid and Manchester City among them.

He had a trial for Chelsea three years later, but the club wanted him to return for a second try-out because they weren’t convinced by his willingness to defend.

Mbappe’s forceful mum Fayza, now 48, reportedly told the scout: “My boy won’t be coming back. If they want him, they have to take him now or in five years’ time they will be coming back to buy him for €50million (£43million).”

And some say that insult still rings in his ears today. A family friend said: “It’s quite possible that Kylian himself has a bit of a downer on what was said about him in England all those years ago.

“This might well give him a bit of extra determination to beat the English on Saturday.” With the Premier League ruled out, in 2015 Mbappe’s dad, now acting as his agent, decided he should sign with Monaco instead — which happens to be a tax haven. The young star received a signing bonus of £345,000.

Five years ago his mum almost convinced him to sign for Liverpool because she was a fan of the Merseyside team, but instead he decided to join PSG in France for £166million.

Leaked documents revealed Mbappe asked for 50 hours of private plane use every year as part of the deal.

In Paris he showed how quick he could be, clocking up speeds of 23mph during one match.

That’s very close to the 26mph that Usain Bolt reached in his world record-breaking 100m sprint in 2009.

But what turned Mbappe into a global sports star at the age of 19 was when he became only the second teenager to score in a World Cup final, when France beat Croatia 4-2.

He was named the young player of the tournament for his four-goal tally.

After that, Mbappe was linked to a string of models such as French beauty Emma Smet and Belgian catwalk star Rose Bertram, but he preferred not to talk about his love life.

That is perhaps understandable, given the vile abuse he received from rival fans at this World Cup. Argentinian supporters in Qatar made rude references to him and a transgender model called Ines Rau, with whom he was spotted at the Cannes Film Festival this summer.

Mbappe has spent a fortune on a string of flash cars, including two Ferraris, and a huge apartment in Paris. At the same time he has set up a charitable foundation that aims to help 98 children — a nod to his birth year, 1998 — to achieve their dreams in fields such as maths.

He also congratulated England star Marcus Rashford on his efforts to give more free school meals to British children.

But that campaigning streak has caused tension during this World Cup. Mbappe did not want to be photographed near the tournament sponsor Budweiser’s logo because he disapproves of alcohol and he has refused to give media interviews.

Such demands would perhaps have more impact if it wasn’t for the fact that Paris St Germain are bankrolled by Qatar.

The oil and gas-rich nation has been criticised for locking up homosexuals and treating foreign workers so poorly that more than 6,000 are estimated to have died while working on the infrastructure for the 2022 World Cup.

Mbappe has not uttered a word against his club’s paymasters, who view him as their poster boy.

This year he has also been caught up in an explosive row between France teammate Paul Pogba and his brother Mathias.

There were wild claims by Mathias that midfielder Paul had used a witch doctor to put a curse on Mbappe. Mathias tweeted to Mbappe: “It’s never good to have a hypocrite and a traitor near you.”

There are also rumours that Mbappe has lobbied against the tactics at PSG, who again failed to reach this year’s Champions League final, and campaigned for Brazilian superstar teammate Neymar to leave.

When Mbappe missed a penalty in August the pair argued after another spot-kick was awarded by the referee.

Legendary French midfielder Emmanuel Petit hit out at Mbappe, saying: “He annoys everyone today. He makes it personal all the time.

“He even puts himself above the institution. Has everything that has happened in recent months gone to his head?”

The youngster denies interfering in team affairs, saying: ‘’That’s not my job. I don’t want to do this because I’m not good at it. I’m good on the pitch.”

What he doesn’t deny is wanting to join Real Madrid and holding contract negotiations with the Champions League title holders.

That led to him being barracked by PSG fans on more than one occasion.

But Macron rang the star striker to change his mind.

The President told him: ‘I want you to stay. I don’t want you to leave now. You are so important for the country.’

Throughout the protracted negotiations Mbappe has his mum standing in his corner.

After one journalist dared to say her son had reneged on the Real deal, she tweeted to him: ‘When we don’t know, we shut up.’

Coming into this World Cup he certainly had a lot to prove.

His tame spot kick in a crucial shoot-out against Switzerland in the Euros last summer meant that France crashed out.

Understandably, Mbappe was outraged by the racist hatred he received for missing the penalty.

So much so he even considered quitting the national side, saying: “I cannot play for people who think I’m a monkey”.

In Qatar, Mbappe has shut up his critics and the bigots.

Having scored five goals in this tournament, including two unstoppable efforts against Poland this week, the forward now has netted nine times at a World Cup.

It’s not surprising that France’s sports newspaper L’Equipe had a headline ahead of the quarter-final against Gareth Southgate’s side declaring “God save Notre King” alongside a photo of Mbappe.

On Saturday, England fans will be praying that our goalie Jordan Pickford does the saving.